Being new to Salt + Light there are a lot of aspects in many different areas to learn about. There are of course the areas of production that an operating television channel deals with on a daily basis. But here in addition to that there are the many different issues and focuses surrounding the topic of faith that a Catholic television channel must also address in the process of production. Being a Roman Catholic I’ve spent the duration of my life attending Mass at Roman Catholic parishes, going to Roman Catholic schools and therefore all that I know and understand up to this point about Catholicism has been governed by these environments. 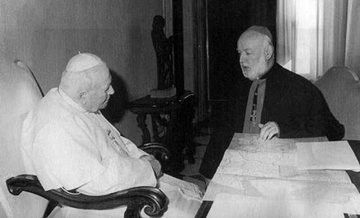 So in an effort to simultaneously write a first blog and further my knowledge of the Catholic Church as a global entity I decided to follow a story that I stumbled upon by chance. While out filming a segment for Zoom at the Pauline Books and Media Store here in Toronto we met Archbishop Hanna Zora, an Archbishop for the Chaldean Church.  He happened to walk into the store while we were interviewing Father Stan Fortuna. (Father Stan, a member of the Franciscan Friars of Renewal, was here in Toronto promoting his new book U Got 2 Love. I could dedicate an entire blog to Father Stan because of his accomplishments on behalf of the Catholic Church and his original approach to preaching the word of God, but I’m going to focus on Archbishop Zora for this one.) Before leaving Father Stan asked Archbishop Zora for a blessing. As we looked on, the Archbishop performed a very moving blessing in the Chaldean Neo-Aramaic language. Now when first hearing this I obviously didn’t know that it was Neo-Aramaic, all I knew was that it was one of the most profoundly moving blessings I’d ever heard in a Church, no less a bookstore. I was naturally curious about this language and the Church where it is spoken at Mass. Chaldean Neo-Aramaic belongs to the Eastern Aramaic Languages which in turn is derived from Aramaic, a Semitic language that has served as the official language for the administration of empires, the day-to-day language of Israel in the second Temple Period and most importantly, was the first native language of Jesus Christ. I think it was that last key fact that made me feel like this was indeed the word of God, that this was close to the language that Jesus would have preached in. So, in an attempt to try to better educate myself on the different Churches within the Church, I used this opportunity to look into the Chaldean Church. The Chaldean Church is one of 22 Eastern Churches which maintains full communion with the Catholic Church.  Archbishop Zora presides over the Good Shepherd Chaldean Church in Toronto. I decided to attend Mass there this past Monday night knowing full well that I wouldn’t understand a word, but to simply go and observe the Mass. What I saw was a beautiful Liturgy, but also something else: what their faith had made possible here in this country. These people have found a means to preserve their culture and foster a community here in Canada through their faith. This Mass showed me just what it means to be a Catholic in Canada. The Church has successfully reunited a people with Eastern backgrounds from thousands of miles away. As I sat in the back row I saw people singing in perfect harmony without any instruments, I saw over ten priests joining Archbishop Zora in the sanctuary, I saw children running down the aisles, children that are being taught the Chaldean language through a program made possible through the efforts of the Chaldean Church with the cooperation of the Government of Canada. It is best expressed on their website: “It is indispensable that they learn the truth about who they are as children of God and as members of the human family.” Although I was not able to fully participate in the Mass I felt honored to be able to witness it. When it came to the sign of peace a woman went out of her way to come five rows back to take my hand, she slid my hand between the two of hers, something I was also unaccustomed to in a Roman Catholic Mass. I encourage you to visit the Chaldean Church’s website HERE and to read up on Archbishop Zora. He has led a remarkable life: from his early days in the seminary in Mosul, Iraq to being the youngest Catholic Bishop at the time he was ordained in 1974, to providing aid through the Church in times of war. He also spent several years of study at the Vatican and worked directly with Mother Theresa. Witnessing him celebrate Mass was truly an honor, especially after researching him beforehand. I’m very happy to be a part of the Salt + Light Family and excited to learn about the different Churches in the Catholic Church, how faith couples with our national identity, and to better understand how the resources we have here in Canada make so many things possible.