Pope in UK: Exclusion of God leads ultimately to "truncated vision of man and of society" - Pope Benedict XVI after meeting with Queen Elizabeth II

This morning at 5:30 am EST (10:30am local time), Pope Benedict XVI landed in Edinburgh, Scotland. This journey is history in the making; it is the first ever state-visit to the UK by a Pope.
Shortly after the Holy Father's arrival, we spoke to CNS' Rome bureau chief, John Thavis who was aboard the flight for the traditional "in transit" press conference with the Holy Father on "Shepherd One". Despite the antagonistic coverage in the British secular press leading up to this visit, Pope Benedict XVI said that he expected England to be "very tolerant" of his visit. The Holy Father also used the occasion to deliver some of his strongest language to date on the sex abuse crisis saying that the Church was "not vigilant enough" nor "fast enough" in dealing with the allegations.  Read about the press conference on CNS here. Upon landing, Pope Benedict XVI traveled to Holyroodhouse, the Queen's residence when she is in Scotland. Instead of the usual jaunt in the Popemobile, Pope Benedict XVI was ushered to a car, making the transit significantly shorter. 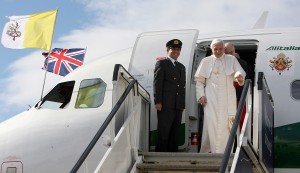 After a 20-minute closed-door meeting with the Queen, Pope Benedict delivered a moving speech recalling that the government and people of the UK are still the "shapers of ideas that have an impact far beyond the British Isles". In true Benedict fashion, the Pope also had lots to say about secularism and its detrimental effects on a society:

As we reflect on the sobering lessons of the atheist extremism of the twentieth century, let us never forget how the exclusion of God, religion and virtue from public life leads ultimately to a truncated vision of man and of society and thus to a “reductive vision of the person and his destiny” (Caritas in Veritate, 29).  ... Today, the United Kingdom strives to be a modern and multicultural society. In this challenging enterprise, may it always maintain its respect for those traditional values and cultural expressions that more aggressive forms of secularism no longer value or even tolerate. Let it not obscure the Christian foundation that underpins its freedoms; and may that patrimony, which has always served the nation well, constantly inform the example your Government and people set before the two billion members of the Commonwealth and the great family of English-speaking nations throughout the world.

Read the full text of the Holy Father's address here. And see below for the Queen's speech:

Address of Her Majesty, Queen Elizabeth II State Reception, Palace of Holyroodhouse - Edinburgh September 16th 2010 Your Holiness, I am delighted to welcome you to the United Kingdom, and particularly to Scotland, on your first visit as Pope. I recall with great pleasure the memorable pastoral visit of the late Pope John Paul II to this country in 1982. I also have vivid memories of my four visits to the Vatican, and of meeting some of your predecessors on other occasions. I'm most grateful to them for receiving over the years a number of members of my family with such warm hospitality. Much has changed in the world during the nearly 30 years since Pope John Paul's visit. In this country we deeply appreciate the involvement of the Holy See in the dramatic improvement in the situation in Northern Ireland. Elsewhere, the fall of totalitarian regimes across central and eastern Europe has allowed greater freedom for hundreds of millions of people. The Holy See continues to have an important role in international issues, in support of peace and development, and in addressing common problems like poverty and climate change. Your Holiness, your presence here today reminds us of our common Christian heritage. And of the Christian contribution to the encouragement of world peace, and to the economic and social development of the less prosperous countries of the world. We are all aware of the special contribution of the Roman Catholic church, particularly in its ministry to the poorest and most deprived members of society, its care for the homeless and for the education provided by its extensive network of schools. Religion has always been a crucial element in national identity and historical self-consciousness. This has made the relationship between the different faiths a fundamental factor in the necessary co-operation within and between nation states. It is, therefore, vital to encourage a greater mutual and respectful understanding. We know from experience that through committed dialogue old suspicions can be transcended and a greater mutual trust established. I know that reconciliation was a central theme in the life of Cardinal John Henry Newman, for whom you will be holding a mass of beatification on Sunday. A man who struggled with doubt and uncertainty, his contribution to the understanding of Christianity continues to influence many. I'm pleased that your visit will deepen the relationship between the Roman Catholic Church and the established Church of England and Church of Scotland. Your Holiness, in recent times you have said that religions can never become vehicles of hatred. That never by invoking the name of God can evil and violence be justified. Today in this country we stand united in that conviction. We hold that freedom to worship is at the core of our tolerant and democratic society. On behalf of the people of the United Kingdom I wish you a most memorable and fruitful visit. -