Everyone has their eyes on the ball 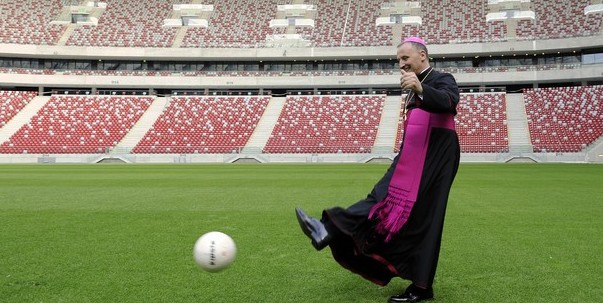 It has long been suspected that Pope Benedict XVI is a soccer fan. Last week in Milan for the World Meeting of Families he received two soccer jerseys, one from each of the Milanese teams. Today, as the EuroCup soccer tournament kicks off in Poland, Pope Benedict sent a message to the president of the Polish Episcopal conference, Archbishop Józef Michalik. He told Archbishop Michalik, “the church is not indifferent to this event, especially to the spiritual needs of those who participate in it” While the pope didn’t say whether or not he will be watching the tournament, but he did say sport can be a means to help build up society. Through sport one learns teamwork, honesty, and respect for one’s body, and how to be in a situation with two opposing sides without being in a battle situation. Indeed, seminaries in various parts of the world have used sports to balance their seminarians’ human formation. Roman seminaries launched the Clericus Cup tournament in 2007 especially for seminarians. In Canada, seminaries in Ontario have organized hockey tournaments, in which both seminarians and professors participate. All invovled say it is not only great stress relief, but brings balance to a life that is otherwise heavy on books and philosophy. It is also common for Italian parishes to have soccer fields instead of parking lots, and pastors who double as soccer coaches in the evenings. Many a vocations has been found in Italy because of the close contact with the church that was fostered through parish sports programs. Pope Benedict encouraged all those involved in the EuroCup tournament to help the event be an expression of the most noble virtues of human action. He also said he is praying for all those involved in the tournament, including players, fans, volunteers and those who minister to them. --- photo courtesty of KCKRS A bishop of Warsaw kicks a soccer ball during the blessing of  a stadium that will be used during the Euro Cup.