Obtenir le lecteur Flash pour voir cette vidéo.
Like many of our viewers, I’ve just returned from my oft-delayed summer vacation. Though I benefited tremendously from several days hiking in the Algonquin and Mont Tremblant parks, the trip was certainly less exotic than my work-travel experience in Rome earlier this year. My final days overseas had provided a study in contrasts between Catholic media in its most primitive and modern forms. Accompanied by two visiting friends from Ottawa, I explored the Catacombs of St. Callixtus where the early Christian community would gather to worship together and bury the dead. We marvelled at the three-level underground maze, which, as our guide explained, would take four hours to walk through in its entirety. 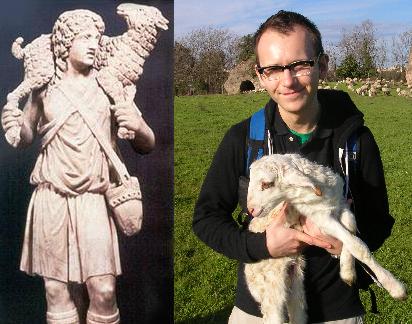 Our whirlwind tour, though, lasted barely 15 minutes—hardly enough time to examine the paintings and inscriptions that have survived some 1700 years. The context of widespread illiteracy and persecution meant that these Christians could only visually depict the Gospel in symbols. Fish, dove and anchor images carved into marble tombstones helped transmit the faith to those informed of their meaning. Another example is the famous Statue of the Good Shepherd, found in the nearby Catacomb of Domitila. (Sheep grazing outside the catacombs added realism.) Just one day after observing these early evangelistic tools, I was covering the Church’s campaign on the new technology frontier. The Pontifical Council for Social Communications had gathered communications leaders from 82 countries (including 75 bishops) for a seminar on digital media. Bishop Peter Ingram of Woolongong, Australia proudly shared with me how his nation’s Church was leading the way with its early embrace of new digital technology. One example was Xt3.com, a social networking site launched in the lead-up to World Youth Day in Sydney. Yet some other prelates like Bishop Jean Gardin, president of the social communications commission of the Republic of Congo, described challenges that would sound familiar to those buried in the catacombs. Even radio signals and newspapers won’t reach certain rural areas of his country, so he relies on old-fashioned face-to-face meeting to mobilize his clergy. A report on the PCCS conference is included in the Catholic Focus episode “Six Weeks in Rome”, which documents my stay in Italy. The program originally aired in April and is now streaming online above. Click here for Evangelizing the digital continent, Part 1