The euthanasia (or the “right to die with dignity”) issue has been rearing its head in Canada for the past 20 years. The issue has already gone, unsuccessfully, before the Supreme Court of Canada. Bill C-384, introduced by Bloc Québécois MP Francine Lalonde to the Parliament of Canada, is the latest attempt. Even the Quebec College of Physicians is calling for the legalization of euthanasia in Canada.
What does the euthanasia bill really state? How does its legalization impact the fields of medicine and law? Close to 150 doctors in Quebec felt strongly enough about the issue to present a brief before the Quebec College of Physicians last fall, stating that they believe euthanasia is not acceptable in any circumstance. Fifteen medical students -- from Université de Montréal, Université de Sherbrooke, McGill University, Université Laval and the University of Ottawa -- all wrote a powerful piece that was published in the National Post on November 18th, 2009. In it, they say:

The end of one's life implies physical and psychological suffering. Medicine can ease the pain for the most part, but the overwhelming reality of physical deterioration remains. Do we lose ourselves when we lose our health? The human being is marked by a desire to be loved in spite of illness and misery. This need for an affirmation of intrinsic worth, despite vulnerability and dependence, cannot be satisfied by suicide, which is an expression of nihilism; as if at some point our humanity could have no value. We, future physicians, will be watchful never to intentionally kill those patients who will be entrusted to us. Rather we will be witnesses to their beauty.

Shannon Joseph is an engineer and Development Officer who has worked with World Youth Alliance, a group that promotes the dignity of the human person in international policy and in culture. In fact she was just returning to Ottawa from her time with them in New York when she heard about Bill C-384. She started a website called Canadians for Care as a response. (Read the blog on Shannon’s site entitled A message to my Canadian neighbors, written by a doctor from Oregon, where assisted suicide is a legal option – it’s a good one). After looking through her website and after conversations with her, I decided to work on a Catholic Focus episode that touches on the identity of the medical doctor and euthanasia. I met and interviewed some of the brave doctors and medical students mentioned above. 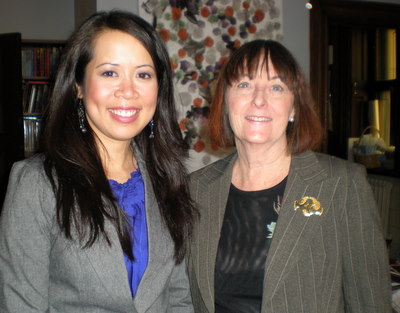 Dr. Margaret Somerville, Director of the Centre for Medicine, Ethics & Law at McGill University, shares with me her insights of 30 years of research on the subject of euthanasia. There are so many materials and websites on euthanasia out there, so where to start? If any of you are wondering the same thing, try these three: www.mercatornet.com, www.LifeIssues.net and the chapter on euthanasia in Dr. Somerville’s book The Ethical Canary. In my Catholic Focus episode, you’ll hear not only from Shannon Joseph and Dr. Margaret Somerville, but also from those working in the field of medicine – medical students, caregivers and doctors. Join me on Wednesday, April 21st and Saturday, April 24th at 7 and 11 pm ET for the Catholic Focus episode “Euthanizing Medicine”.