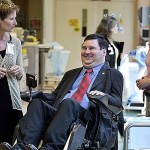 Last week Canadian Member of Parliament for the Winnipeg-area riding of Charleswood-St. James-Assiniboia, Steven Fletcher, who is a Quadriplegic has stated he will abstain from voting on the right-to-die bill, C-384, which is currently going to its second reading in the House of Commons. This bill would allow people with terminal illness and those in severe untreatable physical or mental pain, to qualify for medical assistance to hasten their deaths. Even though the bill -- which was tabled for the first time in 2005 by Bloq Quebecois MP Francine Lalonde of the riding of La Pointe-de-l'Île -- states that the patient would have to be over 18 years-old, have to be lucid, have to request death on two occasions, and the doctor would have to get a second physicians opinion, critics say it is too broad and any such law would lead to the “slippery slope” that would make certain people more vulnerable. This is not new information – and it is exactly the disabled community that feels most threatened by euthanasia and assisted suicide. This is why Mr. Fletcher’s comments on the matter carry special weight.
Mr. Fletcher has said that he supports euthanasia, but believes people should be helped to choose life. I don’t get it. Does he not understand that once the law says that killing is OK under certain circumstances, people’s attitudes will begin to change: the law says it’s OK, then it must be OK– and that’s where the slippery slope begins. We can predict a future where killing will be acceptable as an appropriate response to pain or whenever anyone feels inconvenienced. Mr. Fletcher was left paralyzed from the neck down after his car collided with a moose in a Manitoba highway, when he was 23-years old. He has admitted that had he had a choice, because the pain was so unbearable, he would have ended his life. But it was the support of his family and community that carried him through and gave him the hope he needed to continue. His successful career as a Federal Cabinet Minister is proof that all people are valuable and despite physical barriers, can lead a productive life. He is a symbol of hope for the disabled community. Mr. Fletcher says that he is abstaining from the vote in order to encourage dialogue. I see it as a cop-out. If he believes people should be helped to choose life, and that the bill is too broad, then he should vote against it. And be glad that Euthanasia was not legal at the time of his accident or he would not be here today to be having this conversation. If you want to know more about this issue, I encourage you to get your hands on our production Turning the Tide, which looks at all these issues and clearly shows the fears expressed by many in the disabled community, and to read what I wrote on this topic a few years ago click HERE and HERE. If you really want to stay informed, visit the Euthanasia Prevention Coalition for the most up-to-date news and information. As we approach the voting day for Bill C-384 (the date of the vote keeps changing, so we don't know when it will be, as of today it's scheduled for Nov 19th), I will be posting a three-part article I wrote in 2007, which also will help you understand these issues better. Stay tuned. - Pedro