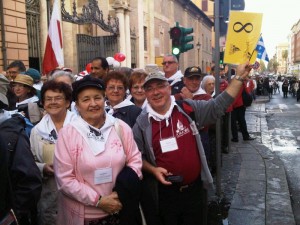 MONTREAL – Nearly 1,000 pilgrims formed the official Montreal and St. Joseph’s Oratory delegation at Brother André’s canonization Mass, last October 17. A little over a week later, these 915 wizened travelers are back, hands and hearts full of pictures and treasured moments. Two people from the Archdiocese of Montreal had the privilege of accompanying groups of pilgrims along their journey in the Eternal City: Msgr. André Tiphane, c.s.s., Episcopal Vicar of Montreal’s eastern region, and Isabel Correa, director of the Youth Ministry Office. Both took the time to tell of their encounters and emotions during their stay in Rome, and especially during the celebrations preceding and following the canonization. Isabel Correa was awed by the people she met and where they came from. “We tend to think all those pilgrims were from Montreal, but many were from all over the planet. I met many distant relatives of Br. Andre from the United States, as well as Holy Cross religious. I even spoke with pilgrims from Bangladesh and Chile. It shows the extent to which Br. André touched people.” Correa also noted some of the pilgrims belonged to the Reformed Church in the United States – proof that Br. André and his values of simplicity and hospitality may help bridge a small part of the denominational divide. Msgr. André Tiphane was thrilled by his week spent accompanying a group of joyful pilgrims. “I really felt that the Holy Spirit was at work. So many of the pilgrims I traveled with experienced extraordinary moments.” Isabel Correa recounted some of the reasons why people went to Rome to celebrate St. André Bessette: “Some had been saving all their life for this occasion. Others had terminally ill diseases and had come to pray for healing of the body or the soul. Many had a Br. Andre story to tell about a healing in their family, and it was passed on from generation to generation.” Msgr. Tiphane admitted to feeling something he likened to a “little conversion”, throughout the celebrations – prayer vigil, canonization, and thanksgiving Mass. “To experience such a grand event in a simple liturgy, to hear the silence of thousands of people on St. Peter’s Square… I was surprised by my own emotional response! Here was ‘one of us’, a witness probably quite different than our usual notions about saints. Br. André was not a triumphant figure, nor an intellectual, but rather a simple and humble man, in the likeness of Mother Mary and Jesus.” Isabel Correa agreed: “I have a feeling that people feel really close to Br. Andre because he was just being himself. One of our own has been recognized for the ordinary things that make saints. He makes it seem easy!” As Montreal gears up for the thanksgiving Mass at the Olympic Stadium on October 30, where over 50,000 people are expected, it is obvious that the humble doorkeeper who built an oratory to St. Joseph continues to call tens of thousands of people to follow in Christ’s footsteps and to serve the meek and the frail.