Embracing Nagasaki: The Christian paradox of joy in a suffering world 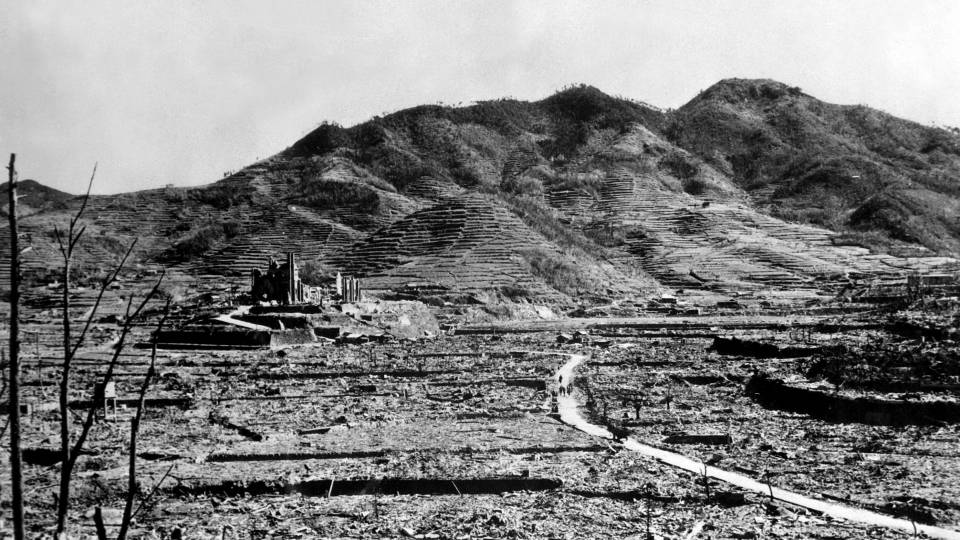 The ruins of Urakami Cathedral in Nagasaki's atomic wasteland (Source: Wikimedia Commons)
I want to share with you something that’s been on my mind lately. This weekend Pope Francis travels to Japan, and on Sunday he will visit Hiroshima and Nagasaki – two cities which we in the West probably would never have heard of had history played itself out differently but which will stand, perhaps until the end of the world, as emblems of man’s inhumanity to man and our capacity as a race for wanton destruction and cruelty. In discussing the pope’s upcoming visit, I learned from a colleague that Nagasaki’s Catholic cathedral had been near the hypocentre of the atomic explosion and had been destroyed that day. And I remembered hearing that there existed an account by a Catholic survivor of the bombing of Nagasaki. As luck would have it, I was able to find a copy in the Toronto Public Library system. On August 9, 1945, Takashi Nagai was a doctor and teacher – the dean of the University of Nagasaki’s radiology department. He was also a convert to Catholic Christianity living among the Christian community – some 12,000 strong – in the Urakami district of Nagasaki with his wife and two children. In his book The Bells of Nagasaki, he gives a vivid and harrowing account of his own experiences that day and of testimonies he received firsthand from others. As one of a handful of surviving doctors, nurses, and medical students, he recounts their determined and heroic efforts to treat the many wounded despite their own injuries, grief, horror, and exhaustion and despite the fact that they were facing an unknown entity – atomic sickness – and were left with few and primitive medical supplies, so much of their equipment having been smashed in the explosion or burned in the subsequent conflagration which consumed the university and its hospital. As I began reading this book, I happened at the same time to be working on a series of light-hearted videos for our Advent calendar. Last week I spent the better part of three days in the editing room with Peter Turek and much of that time laughing. During one of our breaks, somewhat incongruously, our conversation turned to the topic of suffering. Peter, who has children of his own, told me about a news report he had heard the previous evening of a toddler killed in Toronto by a falling air conditioner and how troubled he was by the utter senselessness of the tragedy. And I shared with him what I had read in the first few chapters of Nagai’s book, in which he describes the hell on earth he witnessed, horrible to read and difficult for my mind to truly comprehend. “And here we are,” Peter said, “making funny videos for the Advent calendar.” Together we pondered, as we all must, I suppose, from time to time, how we reconcile our comfortable lives with the suffering that exists in the world. How can we laugh in the face of such pain and sorrow? How dare we? I wondered out loud whether it was better not to know, but Peter reminded me that Pope Francis says we must not look away. We must see those who are suffering. How then can we laugh? I was still pondering this the next morning when I came up with the only answer I could: We were made for joy. We were not made for suffering but for joy. And yet as St. John Paul II writes in Salvifici Doloris, his apostolic letter “on the Christian meaning of human suffering”:

[The theme of suffering] is a universal theme that accompanies man at every point on earth: in a certain sense it co-exists with him in the world.

We were not made for suffering. It was not part of God’s plan for us but came to us with the disobedience of our first parents. And then in a way which we probably cannot fully understand this side of Heaven, Christ did not come to eliminate our suffering but to redeem it, to sanctify it, to give it meaning by taking our human suffering upon himself. And we in turn have the opportunity to participate in the Redemption through our own individual and collective suffering. In his address given at the funeral of the atomic bomb victims, who included his own wife, Takashi Nagai saw in the tragedy the “mysterious providence of God”. It was a meteorological circumstance which caused the bombing of Nagasaki when Kokura, the primary target, remained clouded over, and an error which caused the bomb to detonate outside the centre of Nagasaki and over the district of Urakami with its large Christian population – the descendants of those who had survived four hundred years of persecution and witnessed the martyrdom of St. Paul Miki and his companions – and the largest Christian church in East Asia.

Nagasaki, the only holy place in all Japan – was it not chosen as a victim, a pure lamb, to be slaughtered and burned on the altar of sacrifice to expiate the sins committed by humanity in the Second World War? … How noble, how splendid was that holocaust of August 9, when flames soared up from the cathedral, dispelling the darkness of war and bringing the light of peace! In the very depth of our grief we reverently saw here something beautiful, something pure, something sublime. Eight thousand people, together with their priests, burning with pure smoke, entered into eternal life. All without exception were good people whom we deeply mourn. 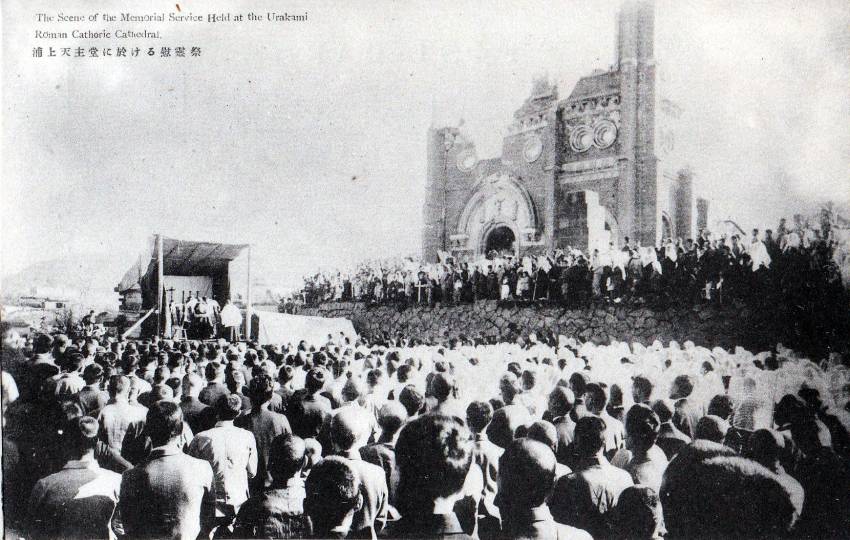 Photo from the funeral service held on November 23, 1945, for victims of the atomic bomb in Nagasaki (Source: Wikimedia Commons)
It is one of the great paradoxes of our faith that we are called to find joy not in spite of our suffering but within it. This does not mean that we should seek suffering or insist on enduring pain which can be avoided – as the Christian idea of suffering has often been misunderstood. But when suffering is brought to us, then we have the capacity to choose to unite our suffering with that of Christ for the redemption of the world.

Now I rejoice in my sufferings for your sake, and in my flesh I am filling up what is lacking in the afflictions of Christ on behalf of his body, which is the church. Colossians 1:24

This is by no means an easy thought, but it is one of the hallmarks of the saints that they are able to see beyond the pain of this world and to have faith in the eternal and trust in God’s love. And we are all called to have that same faith, that same hope. But where do we find it? Not in ourselves but in God. Pope Francis begins his apostolic exhortation Evangelii Gaudium with these words:

The joy of the gospel fills the hearts and lives of all who encounter Jesus. Those who accept his offer of salvation are set free from sin, sorrow, inner emptiness and loneliness. With Christ joy is constantly born anew.

He continues a few paragraphs later:

There are Christians whose lives seem like Lent without Easter. I realize of course that joy is not expressed the same way at all times in life, especially at moments of great difficulty. Joy adapts and changes, but it always endures, even as a flicker of light born of our personal certainty that, when everything is said and done, we are infinitely loved. I understand the grief of people who have to endure great suffering, yet slowly but surely we all have to let the joy of faith slowly revive as a quiet yet firm trust, even amid the greatest distress: “My soul is bereft of peace; I have forgotten what happiness is… But this I call to mind, and therefore I have hope: the steadfast love of the Lord never ceases, his mercies never come to an end; they are new every morning. Great is your faithfulness… It is good that one should wait quietly for the salvation of the Lord” (Lam 3:17, 21-23, 26).

Writing within the first year of the atomic devastation of his home, Takashi Nagai charted the return of life to the barren wasteland and the beginning of reconstruction. And he observed the striking role of faith in this renewal of an area first an emblem of Christian persecution and now also a symbol of death and destruction on a colossal scale:

The person who sees Urakami from the window of a train might think that it will forever be a heap of ash and debris and that resurrection is impossible. But it isn’t so. Little by little, people are putting things in order and rebuilding their homes. Though it may not be apparent to the eye, the atomic desert is gradually sending forth new shoots of life. Living with deep faith and enduring courageously, this tiny group of people, who know the happiness of weeping, is suffering to make amends for the sins of the world. People without faith have not returned. Faith alone is the motivating force behind the reconstruction of Urakami.

I’m not a philosopher. I’m not a theologian. I’m only an ordinary Christian, and though there are writings out there to help us understand the place of suffering in our world and in our lives and the joy we can find there, it seems to me that as individual Christians, each one of us has to face the paradox on our own as well and find the answer in our heart. How fitting, I think, that I should be pondering all of this precisely at this time of the liturgical year when the readings at Mass are filled with images of persecution and the end of the world. Because what comes next? Advent, that season of waiting and longing for God come in human flesh to redeem our suffering and bring us joy. It is fitting, too, then, that the one surviving bell of Urakami Cathedral, which was recovered from the rubble intact despite a fall of fifty metres, first rang out again, four months after the atomic tragedy, on the night of December 24th. As the Church has us remember on Christmas Day: What came to be through him was life, and this life was the light of the human race; the light shines in the darkness, and the darkness has not overcome it. John 1:3-5 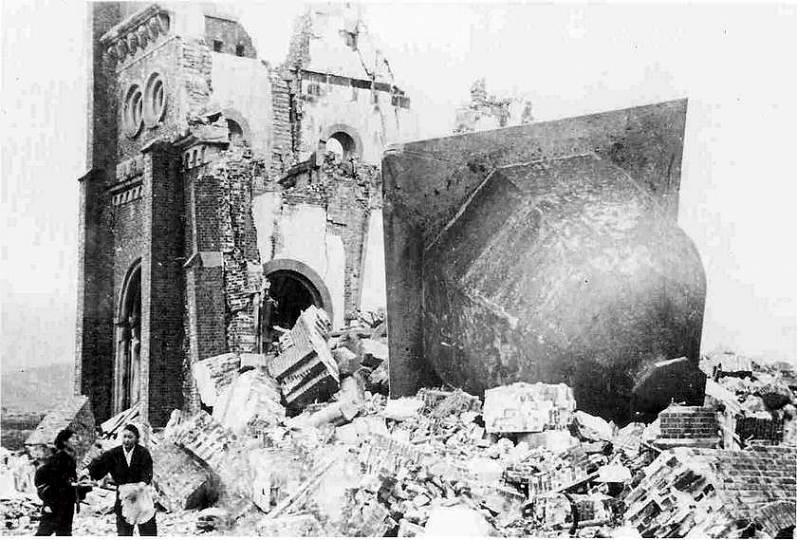