Do You have One Foot in Both Worlds?

Last week, the Salt + Light staff had a retreat day in the office. We were instructed to stay away from our computers, and to sit around a long, long table with a Bible and notepad handy. Fr. Thomas Rosica, our CEO, was to give the retreat, and he invited the Communications Department of the Archdiocese of Toronto to join us. We reflected on Scripture, shared insights, we had Adoration, and breaking of the bread twice – for Mass and for lunch!The first half of the retreat revolved around the story of the Prodigal Son, from Luke 15: 11-32. Fr. Tom asked us to look at the story from the different points of view – of the forgiving father, the prodigal son, and the loyal older brother. I LOVED how everyone shared their own reflections or insights on this parable – it’s like we gave a retreat to each other!!! 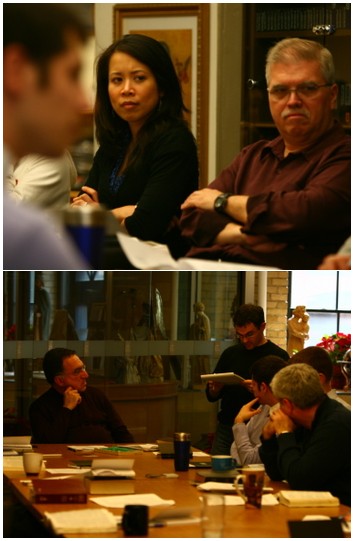 I could really sympathize with the older son. He was the one who followed all the rules, did what his father told him, and expected some sort of recompense for all his sacrifices. He could have been the one having all the “fun” in the life of worldliness that his younger brother had! He saw how his father had always been watching out for the day his younger irresponsible brother would come home, and upon seeing him in the far distance, running to him, embracing him, kissing him, this was just too much! How did his younger brother, for all the people he had hurt, all the money he had wasted, how could he be the one to get the fattened calf?!Upon reflection, the older brother always did what was right but wasn’t happy (it made me think of some people I know who are very devout, go to Mass daily, but act in a bitter and sour way... they haven't truly allowed God to penetrate their hearts). He said that he slaved for his father, and using the word “slaved” shows that he didn’t seem to have had that personal relationship with his father... that’s why he never had that joy that comes from a warm, loving relationship -- a relationship based on love.One of my colleagues made a comment that stayed with me. It could be looked at as better to be either hot or cold than lukewarm. For example, the younger brother was at the lowest he could be in his life. So he could either stay there or go up. But when you’re lukewarm, it’s easy to stay lukewarm. The older brother did the right things, but his heart wasn’t in it – he was jealous of the life his brother had. He had one foot in his father’s house and one foot in his brother’s world. Maybe what God asks us to do is to give him our heart, totally and joyfully, so that we can experience the joy that comes from being a Catholic and a Christian – that is, with both feet in one world, the world of living the Gospel.