"Do Not Be Afraid! 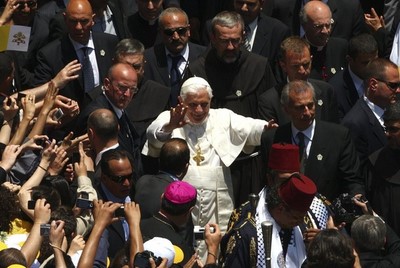 As seen on Salt + Light, Pope Benedict XVI was welcomed to Palestinian territory today. He celebrated Mass in Bethlehem, visited a refugeee camp, and the Presidential Palace. The Holy Father's powerful homily in Bethlehem carried the theme of courage and faith, using the phrase "Do not be afraid" three times.

This is the message which the Successor of Saint Peter wishes to leave with you today, echoing the message of the angels and the charge which our beloved Pope John Paul II left with you in the year of the Great Jubilee of Christ's birth. Count on the prayers and solidarity of your brothers and sisters in the universal Church, and work, with concrete initiatives, to consolidate your presence and to offer new possibilities to those tempted to leave. Be a bridge of dialogue and constructive cooperation in the building of a culture of peace to replace the present stalemate of fear, aggression and frustration. Build up your local Churches, making them workshops of dialogue, tolerance and hope, as well as solidarity and practical charity.

Throughout the trip, the Pontiff has acknowledged, and lamented, the exodus of Christians from the Holy Land. He has also done his best to encourage those in the region, as was heard in his homily today. He emphasized the important role that they play not just for the Church, but for the Holy Land.

Your homeland needs not only new economic and community structures, but most importantly, we might say, a new "spiritual" infrastructure, capable of galvanizing the energies of all men and women of good will in the service of education, development and the promotion of the common good. You have the human resources to build the culture of peace and mutual respect which will guarantee a better future for your children. This noble enterprise awaits you. Do not be afraid!

Returning to the theme of peace in the region, the Pontiff spoke of the conversion to Christ and stressed "the courage to abandon fruitless and sterile ways of thinking, acting and reacting" and the cultivation of a "mindset of peace based on justice, on respect for the rights and duties of all, and commitment to cooperation for the common good." Before the Mass, the Holy Father met with Palestinian President Mahmoud Abbas. In their meeting, he pledged support for an independent Palestinian nation: "The Holy See supports the right of your people to a sovereign Palestinian homeland in the land of your forefathers, secure and at peace with its neighbors, within internationally recognized borders." He also prayed for security in Israel and Palestinian territories, so that people of different faiths can travel freely to different religious sites. Aware of the bleakness that many young people feel in the region, the Pontiff offered an appeal to Palestinian youth:

Do not allow the loss of life and the destruction that you have witnessed to arouse bitterness or resentment in your hearts. Have the courage to resist any temptation you may feel to resort to acts of violence or terrorism.

Peace. Justice. These themes have been very much at the forefront today in the Holy Father's visit to Bethlehem. Visiting Christ's birthplace today, Pope Benedict will enter into our Lord's hidden life on Thursday as he visits Nazareth. - Photo: Reuters