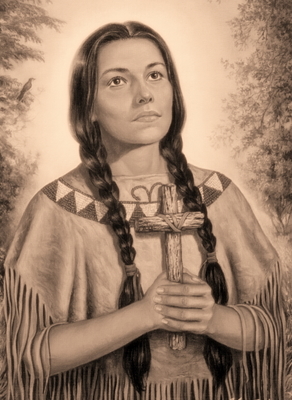 I was in Grade 10 when I first sat with First Nations people around a circle and “smudged” with them. Smudging is a ceremony that is meant to cleanse the spirit as we ask the Creator to heal us. Sweetgrass and other herbs are burnt, and as an eagle feather is used to waft the smoke in your direction, you are supposed to rub your hands into the smoke and draw it into your body, especially the parts of you that particularly need healing. Catholics are reminded of incense during the Eucharistic Liturgy, which also prepares the participants for the celebration.
But at the time, I was only a grade 10 student intent on understanding Native Canadians for my Geography Fair project on Oka. And now, almost 20 years later, I find myself still striving to understand them, but this time, in light of my Catholic faith. How do our First Nations Catholics stay true to their culture while living a Catholic lifestyle? Is this even possible? In April of this year, I was in Edmonton to take part in the Archdiocese of Edmonton’s Nothing More Beautiful. After I found out that the fastest growing sector in Edmonton is the Aboriginal population, and that Edmonton has the Sacred Heart Church of the First Peoples which is a national parish (meaning that any First Nations person from anywhere can receive their sacraments there – the parish is not bounded by geography but by culture), I decided to continue the journey I was on in grade 10. I visited with Fr. Jim Holland, OMI, who has been the pastor of this church for almost 14 years. I was also able to experience half a day being in an Aboriginal school; Ben Calf Robe-St. Clare School in Edmonton is the only strictly First Nations, Métis, and Inuit program in the Edmonton Catholic School Board. I also met up with Wayne Ashley, a Cree artist, who showed me how he combines aboriginal and Christian imagery in art. And finally, when I was back in Toronto, I went once again (because I was there once before) to St. Ann’s Parish, which is Toronto’s Native parish. There, Fr. Frank Wagner, CSC, and I had a conversation on what the Native spirituality has to teach us, and what Blessed Kateri Tekakwitha, the first and only Native Catholic to be declared a Blessed by the Catholic Church, has to say to us today. In his address to the native peoples in Canada in 1984, Pope John Paul II said "… The Gospel does not destroy what is best in you. On the contrary, it enriches, as it were from within, the spiritual qualities and gifts that are distinctive of your cultures." In his 1987 address to the native people in Arizona, Pope John Paul II added: “… Preserve and keep alive your cultures, your languages, the values and customs... these things benefit not only yourselves but the entire human family.” On Wednesday, November 18th and Sunday, November 22nd, at 7 and 11 pm ET, join me for Catholic Focus: First Nations Catholics, as I try to understand what the Native spirituality lived in light of the Gospel has to say to us today.