Director of JRS Syria: “We don’t have the right to do nothing” 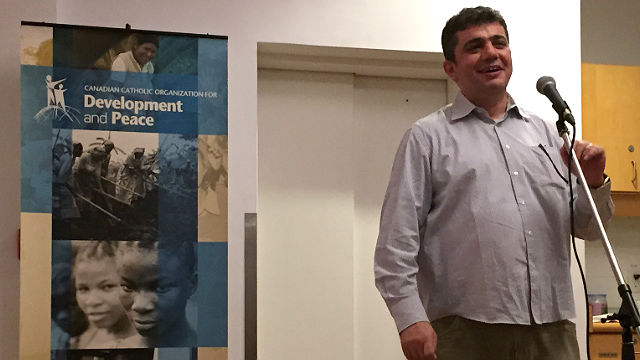 The Director of Jesuit Refugee Services in Syria, Fr. Nawras Sammour, SJ visited Toronto last week to speak about the ongoing civil war and refugee crisis plaguing his home country. The event, which was co-hosted by Canadian Jesuits International and Development and Peace, was held at the Jesuit parish of Our Lady of Lourdes in downtown Toronto. Speaking to close to one hundred people gathered in the parish center, Fr. Sammour outlined the work of JRS Syria which includes emergency and ongoing medical care, and educational and psycho-social treatment. Their centers serve more than 35,000 families. Echoing one of Pope Francis’ central teachings, Fr. Sammour said that “the most important work we can do is accompanying people. That is our primary responsibility.” In a country torn apart by more than three years of political and religious sectarianism, the only response for JRS is to stand with those who suffer the most. “We are weak,” he said, “but being the weakest and the lowest is a grace in this regard: that nobody is threatened by us or afraid of us. And so we must use this grace to talk to everyone and try to build a better future for everyone.” 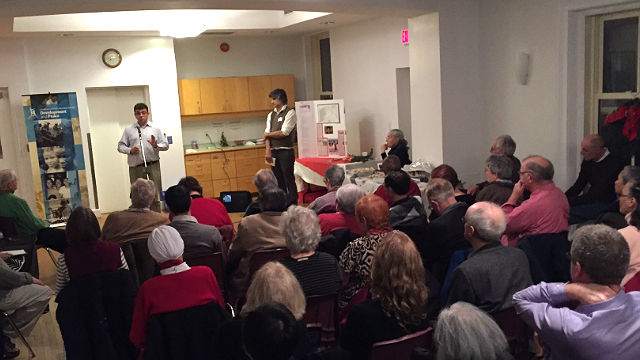 Jesuit Refugee Services, which is supported in part financially by Development and Peace, does not consider religious or political affiliation when serving refugees. Anyone who is in need can come to their centers, where they will be served by professionals and volunteers who themselves come from diverse backgrounds. “Parents come with their children and the parents are sick and hungry, but they are seeking care for their children first,” he said, “only on an airplane do you have to put your own oxygen mask on first and then help your children. In Syria the parents come and say, “Please, my children are hungry, help them first.”” While millions of Syrians have fled to neighboring Arab countries including Lebanon, Turkey and Jordan, Fr. Sammour reminded everyone that the largest group of displaced persons are still in Syria. They have been forced to flee their homes and move to less-violent areas, and their stories are often ignored or quickly forgotten. 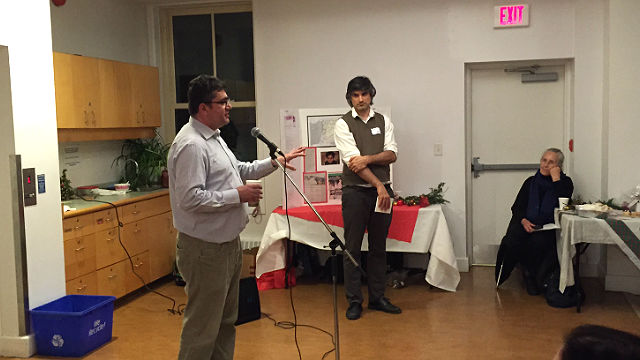 Against overwhelming odds and dwindling resources, JRS continues its work accompanying refugees in their daily struggles. “We don’t have the right to do nothing,” said Fr. Sammour. “This is a civil war, but it’s not only a civil war. It is also political, economic and religious… The attitudes that are prevailing refuse to accept a ‘win-win’ situation. In their own minds, they have to win and everybody else has to lose. We are all losers in this catastrophe, the attitudes need to change.” Jesuit Refugee Services link: http://en.jrs.net/index Development and Peace link: http://www.devp.org/en