I had been explaining some red-flags that I found in the book Final Exit by Derek Humphry (see Part II, and also Part I), and ended up talking about relativism: you may not want euthanasia for yourself, but don't impose your beliefs on someone else, which is the number one flaw with this book, and with the thinking of anyone who is actually considering that euthanasia or assisted suicide are viable options. We 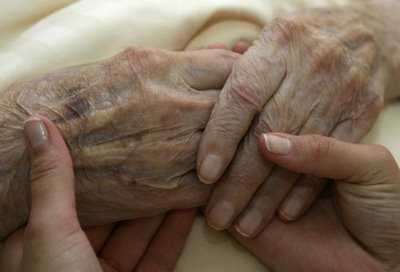 can't all come up with these things on our own. Your personal autonomy shouldn't be permitted to trump the safety and well-being of society. In the words of disability-rights-activist Catherine Frazee (she used to be the chair of the Ontario Human Rights Commission), "It's not about the particularities of a law and what it prevents and prohibits. It's much more about the messages of the law and how those messages get translated into a social and cultural order." (Catherine is featured in our documentary on Euthanasia, Turning the Tide, which I produced for S+L Television in cooperation with the Euthanasia Prevention Coalition back in 2006.)
I spoke to Derek Humphry at the Right to Die Conference in Toronto in 2006. I said to him that I found his book compelling (which is true). But I had one difficulty and that was his use of the word "dignity." I said that when people who believe in God use the word "dignity" I understand what they mean. But when someone, who doesn't believe in God uses that word, it's meaningless. I don't know what they mean. So I asked, "what do you mean when you say "dignity?" Guess what? He couldn't answer me. He mumbled something about how we all have to come up with our own definitions. But I looked it up:

Dig•ni•ty Pronunciation: 'dig-n&-tE Function: noun Etymology: Middle English dignete, from Anglo-French digneté, from Latin dignitat-, dignitas, from dignus 1 : the quality or state of being worthy, honoured, or esteemed 2 a : high rank, office, or position b : a legal title of nobility or honour 3 archaic : DIGNITARY 4 : formal reserve or seriousness of manner, appearance, or language

I don't think he meant "high rank, office or position" or anything about manner or language. He means "the quality or state of being worthy." People! If you don't believe in God, from where does your dignity come? Nowhere. That's where. There is no reason to consider human life of any value whatsoever if we believe we are an accident of evolution and if you don't believe there is anything after this life. That makes no sense. I'm not saying you have to believe in God or in the afterlife, but if you don't, don't go around pretending that human life has value and worth. I've said this before, without God, we would be subject to entropy, which only leads to disorder and death. As soon as you accept that there is dignity in life, you have to accept that there is dignity in all life. I don't think anyone (except Bioethicist, Peter Singer, who thinks babies who are born disabled should be euthanized, a practice which now takes place, legally in Holland), wants to open that can of worms. I'm not going to decide which life is valuable and which one isn't. Is Teague Johnson's life valuable, because he was loved by his parents? And was Tracey Latimer not valuable? (She was also disabled, but his father killed her to rid her of her pain, he claimed). Was Terri Schiavo's life not valuable (her brother, Bobby Schindler is also featured in Turning the Tide)? Are we suggesting that laws can be formulated to tell us whose life is valuable and whose isn't? Oh, wait. We can decide if our own life is valuable. That's what leads hundreds of depressed teen-agers to commit suicide every year. But, it's ok. They can decide for themselves. That's autonomy. No need spending any money on suicide prevention week. Which leads me to my last point which has to do with this concept of quality of life. According to Humphry, self-deliverance should be an option when our quality of life has been reduced to mere existence. But wait, I thought that existence was the criteria for life. Are there really people out there who believe that one life is more valuable than another? (Oh, yes, Peter Singer, I forgot ? He's a Professor of Bioethics at Princeton). If you have life, then you have quality. Is it right for a depressed teen-ager that believes his life has no quality to kill himself? No. To that person we offer counselling and help. We go into suicide-prevention mode (trust me, I worked at Covenant House). But if that person is hopelessly, terminally ill, then compassion means helping them end it. Don't you see there can't be a double standard here? If we tell that person who is terminally ill that it's ok to end their life, then we are actually saying that their life is not as worthy as another life. Your quality of life does not come from what you are able to do or not do; it comes from who you are. It comes from your relationships; how you relate to others. Any disabled person will tell you that. Compassion means giving them the proper pain control (not just physical pain, but also emotional pain) and being with them, loving them, caring for them, making them feel worthy. What we need in Canada is not legalised euthanasia or assisted suicide, what we need is better palliative care. Anyway, Humphry continues and explains the different kinds of Euthanasia: Passive Euthanasia, Self-deliverance, Assisted Suicide and Active Euthanasia. Let me explain and clarify a few things for those of you who may be considering this: For the record, the Euthanasia Prevention Coalition in Canada defines Euthanasia as: to intentionally cause death by action or omission of an action, for allegedly merciful reasons. And Assisted suicide is to knowingly provide the means for a person to kill him or herself. So there you have it. If you want personal control and choice over your final exit (all the world's a stage), this book will help. I'm sorry this is so long. But we need to let Canadians know the dangers of this euthanasia mentality. Once we legalise something, it becomes part of our collective belief system. I truly believe that. So, legalising it today, means that three generations from now, it will be commonly accepted that it's ok to resort to killing in order to deal with difficult situations. That's the slippery slope. And there are no safeguards that will work. Once we accept that killing is ok in order to relive suffering, killing will be the norm. And next thing you know, killing will be acceptable to rid us of other inconveniences. For more information you can contact the Euthanasia Prevention Coalition, the International Task Force on Euthanasia and Assisted Suicide or the Catholic Organization for Life and Family. On December 1, Bill C-384 will be getting it’s second hour of debate in the House of Commons, and a second hour and vote the next day. This bill, if passed would legalise Euthanasia and Assisted suicide in Canada. If this concerns you (and it should), find out more, let others know, write to your MP and your newspapers and pray. Send me your comments. Pedro.