Welcome to S+L’s Weekly News Round-Up. As the Director of Marketing and Communications here at S+L, many interesting Catholic news stories and articles come across my desk on a daily basis. Some of them we’ll cover on our different television programs and others I’d like to share with you on this blog.
This blog column is where I’ll point out some of the more interesting news pieces that I’ve come across over the past week! Enjoy!

This week on the Weekly News Round-Up, I thought I might do something a little different than the usual headlines I showcase. I'll get back to that next week.
Instead, I thought I might share my experiences from an event that I had the great honor to speak at.
Yesterday, I was invited to speak to over 150 students from the Calgary Catholic School Board at their annual Digital Citizenship Conference, this year titled Your Voice Matters.
At this event, I was greeted by an enthusiastic bunch of junior high school students (grades 7-9) and their teachers at the Conservatory building of the Calgary Zoo, where I was asked to talk to them about Promoting a Catholic Presence on Social Media.
What a fantastic reception! The kids were engaging, funny and all around enthusiastic about their faith. I was very appreciative of the kind hospitality the organizers Charmaine Monteiro, Stephanie Proctor and Andrea Gillier gave me and the many others who made my visit and stay a trip to remember! What follows is my text of my speech. I hope you enjoy!

Thank you for the amazing and warm introduction! I'm very happy to be here to talk to you all. I love Calgary. So earlier today, I had a chance to listen to both Julie and Paul. And I have to say, what wonderful speakers. You are very lucky to have such great and talented speakers to help you navigate through this webspace we call the Digital Continent. Before we begin, I’d like to ask a few questions... First of all, can I get a show of hands… Very interesting indeed. Well, I’m happy to say that you’ve all passed and after this session, you can go see your teacher to redeem the extra bonus marks!. Ok, in all seriousness, I'm here to take you along a different tangent from this mornings talks and talk about 4 main things: And to kick off this session, I’d like to say we’ve done it. My television station, Salt and Light TV, which broadcasts all over Canada, the US and now in Europe, have been doing it for the past 12 years. We’ve been putting ourselves out there and now we’re in over 3 million homes and growing. Have a look:

Now when you do that, keep in mind that you will get criticized, sometimes laughed at, maybe called names like a bible thumper, holy-roller, Jesus Lover… or whatever, AND you may even lose the respect of some friends. Be prepared for hostility for your beliefs, no matter what they are. That kind of sucks right? BUT consider this. Consider what’s in it for you! So consider this thought. The first person that benefits by putting yourself out and affirming your Catholic beliefs there is you. The second person that benefits is everyone else around you. In essence, you become the Salt of the Earth and the Light of the World EXACTLY what St. Pope John Paul II specifically asked us to do. Let me ask this: The reason I bring this up is because 90% of the content on the internet is like junk-food of various degrees but junk food nevertheless Seriously. Fake, cheap, junk, filled with negativity, criticism, hate, abuse, bullying. IF you consume that crap day in and out, your mind will conform to those values and attitudes, then you become part of the problem. However, if you are careful of what you put in your body, like a body-builder, you become different, strong… in your mind and attitude. You are what you consume and that saying doesn't just apply to food. It applies to everything you consume, so be careful with what you consume for your mind. Has anyone heard of the actor Mark Wahlberg, from Transformers? He really came out about his catholic faith on CNN. Check it out:

Now that is brutally honest. He took a lot of heat for that online. There are many other high profile celebrities and hollywood A-listers that are putting themselves out there on social media because of the reasons we spoke about. Yeah, they’re not always be perfect but neither are we. They have the same struggles as we do, if not amplified, by their celebrity status. Celebs like Mel Gibson, Stephen Colbert, Martin Sheen, Jim Caviezel and so many others are proclaiming themselves Catholic/ And the reason why they are putting themselves out there as Catholics can be summarized in this little clip. Have a look:

Session 2 - How In this session, I’d like to talk to you about how to put yourselves out there as good Catholics. And to begin, the easiest way is simply to like, post and share good Christian/Catholic content on whatever social media platform you use. It's that simple. You don't need to make grand proclamations, you don't need to be on CNN or make video clips to post on Youtube. Simply like, post and share good Christian/Catholic content that represents your faith, content that is positive, hope-filled and optimistic. As a digital citizen, you have an opportunity to take a stand on issues and truly define yourselves to the world. So I thought it would be kind of cool to have a look at some of the sites I personally like and some that we use at Salt and Light TV. Here are a few of my favourite ones: Session 3 - St. John Paul II In this final session, I’d like to take a moment to talk to you about one of the greatest communicators of our time, of my time. Someone who by the very nature of his heart, and not by his job, put himself out there, in a way that none of his predecessors have done so in the past. He did this at a time where the global and political environment was harsh against religion; at a time when being religious, let alone Catholic, could mean imprisonment or even death. He was great not because it was his job to be great, but because of the suffering he endured throughout his life. He was renowned for NOT being bitter or harsh, but for courage and optimism in the face of evil, and the light of hope he spread in this world. This person personally reached out to the youth of the world and hence started what has become one of greatest youth gatherings in the world. It happens every 2-3 years: World Youth Day. The person I’m talking about is none other than Pope John Paul II or St. JPII. Have a look:

Be Not Afraid was his message to you, the youth. Be the Salt of the Earth and the Light of the World. When you stand up for your beliefs, no matter WHAT they are, you’ll be criticized, antagonized, laughed at and, in some cases, villainized? But. Be Not Afraid. When you stand up to be a shining example of what's good in the world, of what's right in the world, of what's just in the world, haters will try to extinguish that light with negativity and cruelness, especially in the digital world. But dont worry. St. JPII reminds us that You are not what they say you are. Let me remind you who you are. As the next generation of young, dynamic Catholics, we need to be present and available where people are spending much of their time - online. We have to take JPII’s call to evangelize on the digital continent very seriously and why? Because YOU are the hope for the future. You are the beacons of light and hope that generations before and generations ahead will look to. We have to stand up and freely and openly state: We Are Catholic!

Finally, to wrap up my time with you, I'd like to show you one last video. If Social Media existed during the time of Jesus this is how things may have looked:

Now take that message, your message, and spread it with hope and joy throughout the world. Your world - the digital continent. Thank you! 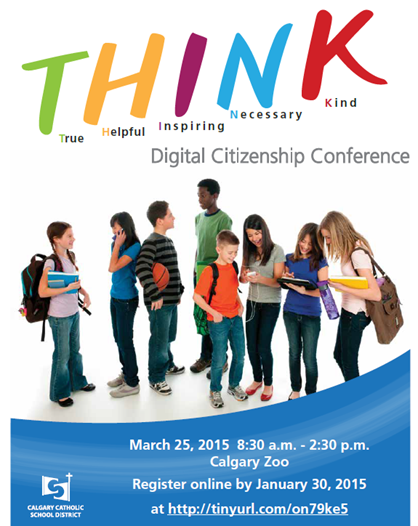