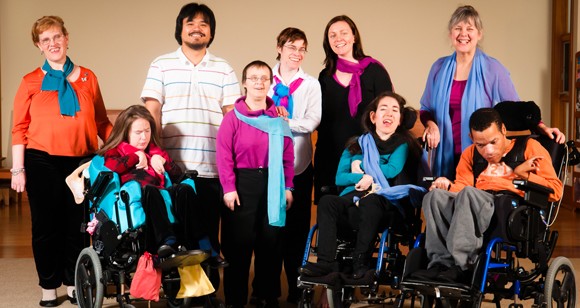 Last Friday, I was at St. Therese of Lisieux in Richmond Hill, Ontario for a presentation by the Sprit Movers.  If you've never heard of them,  the Spirit Movers is a dance troupe from the L'Arche Daybreak community, composed of people of all abilities who celebrate the gift of diversity through sacred dance. I first came into contact with the Spirit Movers as we were preparing for WYD2002. We asked them to participate in the Papal Welcome Ceremony at Exhibition Place. Many of us remember an emotional performance to Joe Mattingly's On That Holy Mountain, with a very aged and disabled Pope John Paul II sitting only a few feet away from the dancers.  Since that highlight performance, my paths have crossed many times with the dance group. None was as meaningful as the six months that I spent during my pastoral placement for diaconal formation at L'Arche Daybreak. Not only did I get to learn a great deal about a population in our society that is often misunderstood and marginalized, but I got to make friends. I made friends with Peter, Dave, Tim, Joey and Helen. They are wonderful, loving human beings, who cannot live on their own. That is their only fault: They need others to help them survive. Every single parent of a child with disability that I know would say that this is also their greatest gift: They provide us with an opportunity for holiness. Jean Vanier would agree. But having a child with a disability is not easy and some parents would choose against it if they could. It is not uncommon for an expectant mother to be offered an amniocenteses test to find out if there is a possibility that her unborn child will test positive for Down's Syndrome. The reason, in most cases, is of course, so they can terminate the pregnancy. They can do so, because that child, that is not born, is not considered a person under Canadian law and therefore has no rights. But there are many who would like to see this law changed. Last February, Conservative Member of Parliament for Kitchener Centre Stephen Woodworth proposed Motion 312, which calls for the formation of a special committee to determine when a human being is formed and, based on that conclusion, what the consequences would be of recognizing a fetus as a human being before it leaves the womb. Even though critics have called this a roundabout way to re-open the abortion debate, kudos to Mr. Woodworth for bringing this up. I mean, it's a good question. This is where the whole abortion argument hinges upon: When does a human being become a person? “It seems reasonable to suggest a study of modern medical evidence about our 400 year old definition of human being." Woodworth said. "We should never accept any law that says that some human beings are not human." Personhood is a legal term.  Have you ever met a human being who is not a person? So it's a legal term that has to do with a person's rights and responsibilities. But really, it's a philosophical question: Not when does life begin, because biologically we know that it begins at conception, but when does "personhood" begin? Because if you are not a person, then you may not have the same rights are other humans who may be persons - namely, the right to life. This is not only about the abortion debate since it brings up a larger issue: What defines personhood? Does it have to do with our cognitive abilities? What does that say about someone with severe developmental disabilities? What does it say about my friends at L'Arche Daybreak? What about someone who is in a coma? Can you be a person, with full rights one day, the next be hit by a car and be in a coma, and not be a "person" but a week later, wake up from the coma and be a "person" again? This is the kind of argument that would not go far in any serious court. This very much concerns the whole disabled community. Motion 312 is scheduled for a one hour of debate on April 26, with a further debate and vote in June or possibly the fall. You can get more information by visiting notyetborn.wordpress.com. I am sad to say that I doubt that Mr. Woodworth's motion will go anywhere since it's very hard for a backbencher motion to get approved in Parliament. But good for him for asking the question. Even if the motion fails Parliament would have discussed it for at least two hours.