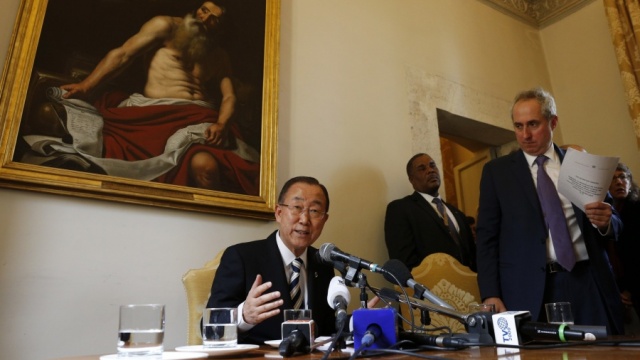 For some time now we have been anticipating the forthcoming encyclical by Pope Francis on the environment. Some would trace the anticipation as far back as that unforgettable audience with journalists a few days after the Pope’s election where he explained the reasons behind his choice of the name Francis, after the beloved Francis of Assisi, the Church’s patron saint of ecology.
The anticipation has pushed many Catholics and ecologists to speculate about what the encyclical will or will not contain.  Though we can make some general presumptions with a degree of certainty—the Pope will undoubtedly build on JPII’s and Benedict’s teachings, and connect the current ecological crisis with the “globalization of indifference” he so often references—it’s probably best not to get ahead of ourselves before reading the official text.  The gravity of the subject should be enough to convince us to set aside our preconceived notions and read the encyclical with an open mind and heart.
These days a more fundamental point has struck me as I watch the anticipation growing and hear more about humanity’s contribution to the earth’s failing health, especially through climate change. It is the reason why the Catholic Church is concerned with the ecological crisis at all, and this goes to the heart of what it means to be Catholic.
It is taken for granted that because Catholics (and all Christians) view the natural world as part of God’s creation, they should value it and care for it. The goal of the Christian life, it is often assumed, is to get to heaven and caring for the created world is a stipulation for getting there. While this is true to a degree, an attitude of individual stewardship doesn’t do justice to the heart of the Gospel or the Church’s official doctrine. It leaves the impression on many minds that Christians should merely do their best here and now knowing one day all will be right in the heavenly kingdom.
For a long time Catholic teaching contributed to this “next world” attitude until the Second Vatican Council shifted the emphasis:

“While we are warned that it profits a man nothing if he gain the whole world and lose himself, the expectation of a new earth must not weaken but rather stimulate our concern for cultivating this one. For here grows the body of a new human family, a body which even now is able to give some kind of foreshadowing of the new age. Hence, while earthly progress must be carefully distinguished from the growth of Christ's kingdom, to the extent that the former can contribute to the better ordering of human society, it is of vital concern to the Kingdom of God.” (Gaudium et Spes 39.)

Pope Francis said as much fifty years later in his apostolic exhortation, The Joy of the Gospel:

“Reading the Scriptures also makes it clear that the Gospel is not merely about our personal relationship with God. Nor should our loving response to God be seen simply as an accumulation of small personal gestures to individuals in need, a kind of “charity à la carte”, or a series of acts aimed solely at easing our conscience. The Gospel is about the kingdom of God (cf. Lk 4:43); it is about loving God who reigns in our world. To the extent that he reigns within us, the life of society will be a setting for universal fraternity, justice, peace and dignity.” (180)

The growing conversation around the ecological crisis, climate change and the Pope’s anticipated encyclical is certainly a positive thing. There are many voices at the table. For Catholics it would be good to remember what brings us to this table in the first place, and that is to contribute to the building of the Kingdom of God in this world; a world of justice, peace and fraternity.
To the extent that the other voices around the table understand this complex and universal approach, collaborative efforts to fight things like climate change can dramatically increase.
Mr. Ban Ki-moon, the Secretary General of the United Nations is one of these voices. In his recent address at a Vatican conference exploring the moral issues around climate change, he said:

“Climate change is intrinsically linked to public health, food and water security, migration, peace and security. It is a moral issue. It is an issue of social justice, human rights and fundamental ethics.”

He then stated what he believes the Pope will say in his forthcoming encyclical; a statement to be taken seriously considering the UN leader met privately with Francis just before his public address:

“[The encyclical] will convey to the world that protecting our environment is an urgent moral imperative and a sacred duty for all people of faith and people of conscience.”

It is clear that Ban Ki-moon understands the complexity of the Catholic approach to environmental issues; for Catholics care for the environment is more than just an individual faith stipulation.  He also believes that faith groups and leaders have something valuable to contribute to the global effort to tackle climate change, especially Pope Francis. The two men appear to share some strong opinions on the matter. In other words, we can believe the UN leader when he says, “I very much look forward to the upcoming encyclical by Pope Francis.” He’s not the only one.