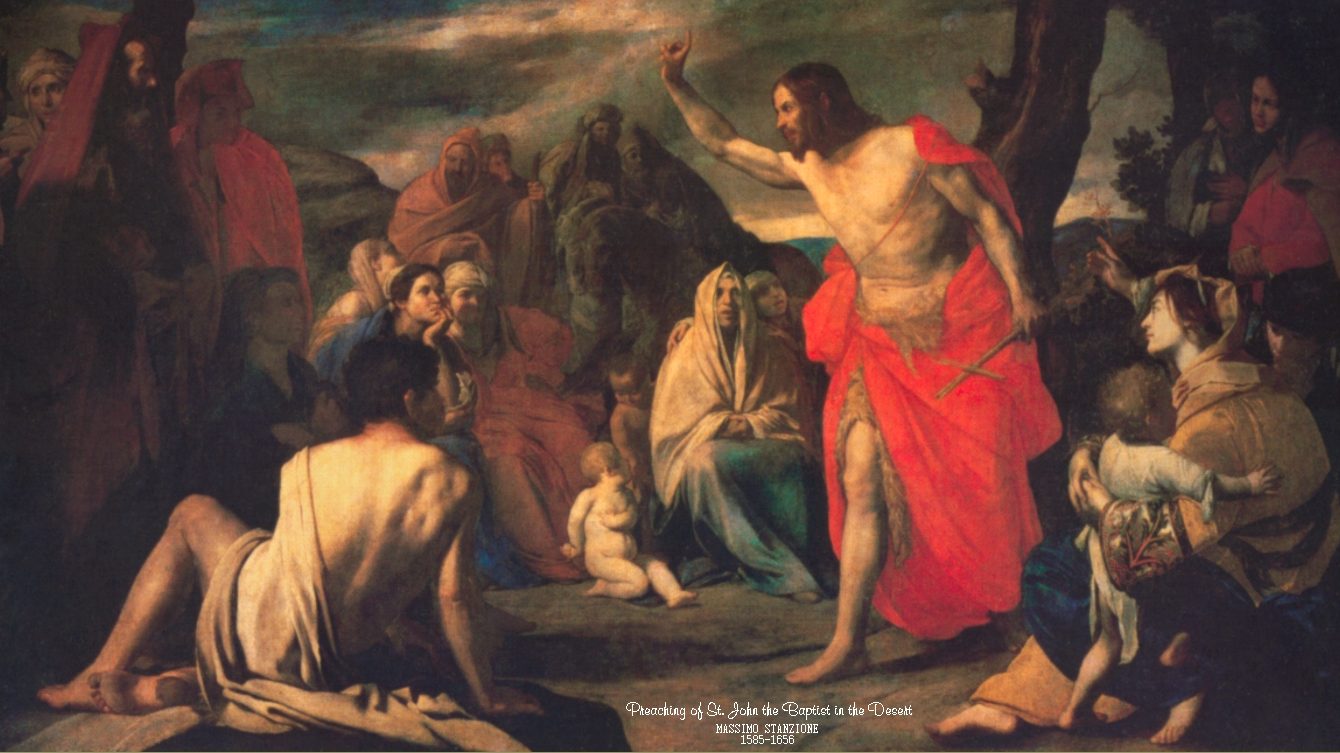 Last week we learned about Zechariah, the father of John the Baptist. Zechariah was a good and righteous man (Luke 1:6) and was a priest (Luke 1:5) at the Temple in Jerusalem (Luke 1:8). He was probably educated and respected as a leader in his community. When the Archangel Gabriel told him that his elderly wife, Elizabeth, would conceive and bear a son (Luke 1:11-17), Zechariah doubted (and was probably a bit cynical about the whole thing, Luke 1:18) and Gabriel took away his voice (Luke 1:19-20). For nine months, Zechariah was left without a voice; he could not speak. When his son was born and Zechariah announced that his name would be John, he was given his voice back (Luke 1:59-64). Then he prayed, “You my child shall be called the prophet of the Most High, for you will go before the Lord to prepare His way, to give his people knowledge of salvation by the forgiveness of their sins” (Luke 1:76-77).

And that brings us to our character for this week: John the Baptist.

As we prepare for our second week of Advent this year, let’s consider what it means to be a voice in the world. John the Baptist always referred to himself as the “voice crying out in the wilderness.” This is a reference to another verse we hear every year at Advent, from Isaiah: "A voice of one calling: ‘in the wilderness, prepare the way of the Lord” (Isaiah 40:3). How do we prepare the way of the Lord? By being a voice. What does a voice do? It speaks. It expresses thoughts, emotions and ideas. It helps us communicate. It announces. What would it have been for Zechariah to have lost his voice? What does it feel to not have a voice? Imagine had the Messiah come with no one to announce His coming? John the Baptist was that voice.

We too are called to be that voice.

This means that we have to have the words to use. We can preach the Gospel with actions and by the way we live our lives, but we must also use our voice. Consider a verse from St. Paul that we heard recently on the Feast of St. Andrew:

“But how can they call on him in whom they have not believed? And how can they believe in him of whom they have not heard? And how can they hear without someone to preach? And how can people preach unless they are sent? As it is written, How beautiful are the feet of those who bring the good news! But not everyone has heeded the good news; for Isaiah says, Lord, who has believed what was heard from us? Thus faith comes from what is heard, and what is heard comes through the word of Christ. But I ask, did they not hear? Certainly they did; for their voice has gone forth to all the earth, and their words to the ends of the world.” (Rom 10:14-18)

Everyone knows of someone who does not have a voice; we certainly stumble over them on our way to work in the morning. Think of the refugees, the migrants, the young, the unborn, the homeless, the elderly, the chronically ill, those with mental health issues, those with disabilities and all who are marginalized in one way or another. Think of all the women (and some men) who are now coming out after so many years of shame and secrecy following a sexual assault. This of the voice that #metoo is giving so many women. It is so freeing to have your voice back. I think we can all relate: Some of us have had times when we felt we didn't have a voice. Some of you may not have a voice right now.

Sometimes we have been guilty of taking someone's voice away.

This Advent let us be a Voice to announce.

Some questions for your personal reflection: 1. What am I announcing day after day without even knowing it? 2. Do I feel like I don’t have a voice? How can I find my voice? 3. Am I guilty of taking someone's voice away? How can I make amends?  4. What can I do today in order to announce the Good News in a simple and effective way?

Let us Pray: "You, my child shall be called the prophet of the Most High, for you will go before the Lord to prepare His way, To give his people knowledge of salvation by the forgiveness of their sins." Come Light of the world and give us the voice to announce your coming!