Deacon-structing WYD: The Church of Panama 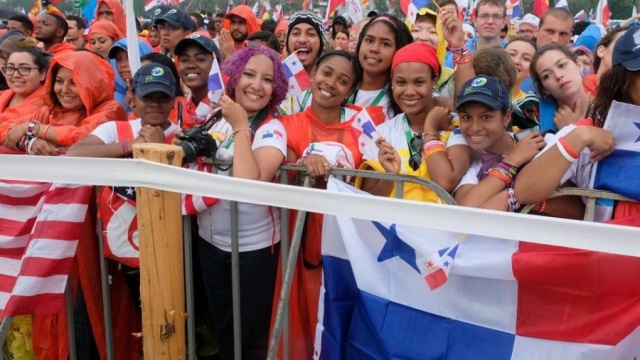 At the end of the Angelus Address, last Sunday, at Campus Misericordiae in Krakow, Pope Francis announced that the next World Youth Day will take place in 2019 in Panama City, Panama. As we begin preparations for this exciting next WYD, Salt + Light's Charles LeBourgeois had the chance to speak with Archbishop José Domingo Ulloa, OSA of Panama City. Here's the English translation of that interview: CLB: Tell us a bit about the Church of Panama: JDU: The Panamanian church (is) the first diocese on the mainland (of the Americas); we have just celebrated 500 years of it’s founding. One of the great features of the Panamanian church is the commitment that the laity have in feeling as church. Historically, the church has worked mainly under the shoulders of the laity in all its responsibilities. It is a church that has always wanted to walk alongside the people. In all aspects, as church we have been walking with (our people): since our independence , the building of the canal, on January ninth, when we regained our sovereignty… the Church has always been there with her people. And now Panama is also known because of it’s expanded canal. I think that one of the characteristics of Panamanians is our capacity always to be open to welcoming all our brothers and sisters of diverse nationalities, races, cultures and religions. CLB: Tell us about the young people of the Church of Panama: JDU: Yes, thanks be to God, we have young people who are, daily, making more and more of a commitment in the journey of the Church. Our church also, we have to recognize, is a church of young people who are in search for discovering their vocation to which God is calling them. I also have to mention that we need priests and some of the work we are now doing is to encourage priestly vocations. There are villages where they don’t have Sunday Eucharist and it’s months, sometimes a whole year – because of the shortage of priests. That is why the laity are the ones that are assuming that role of taking the Word of God and feeding that spiritual hunger of the people. CLB: What are your hopes for the future of the Church in Panama? JDU: The future of the Church in Panama; a church that every day is closer and closer to the people and more committed to the most in need. I think that this is the style also, that Pope Francis has been presenting us: A church that gets out of the sacristy and goes where the people are most in need: giving a hand to drug addicts, to migrants, to refugees... And also that can collaborate so that there is peace among us in spite of our differences. - Photo credit: Chris Adamczyk 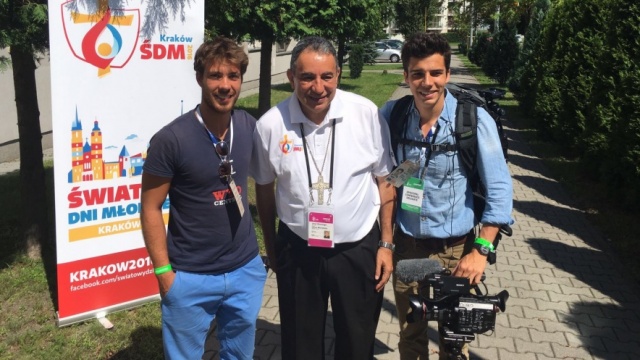 Charles LeBourgeois and camera man, Lou-Kevin Roquais with Archbishop José Domingo Ulloa at WYD in Krakow. Photo: Charles LeBourgeois
Here below is the press conference that followed the announcement at WYD 2016. From left to right are Paulina Guzik and Yago de la Cierva from the WYD Krakow committee, asking questions and translating, respectively. Next to them are Archbishop Ulloa of Panama, Cardinal José Luis Lacunza, OAR, bishop of David, Bishop Manuel Ochogavía, OSA of the diocese of Colón and Victor Chang, Coordinator of the Panamanian delegation to Krakow 2016.