Deacon-structing WYD: How We Prepare

So how do we prepare?

When one travels to a WYD, there is a lot of emphasis that is placed on pastoral preparation (and there should be). There also should be a lot of spiritual preparation. I remember in 1999 when I was invited to do the Spiritual Exercises of St. Ignatius in the daily life. This year-long program was being offered at my parish. All I knew was that it meant you had to pray for an hour a day. My initial response was, "I can't do that," and I shrugged it off. At the insistence of Fr. Gilles Mongeau, SJ, I was convinced to do the Exercises, and all I can say is that it was one of the best things I've ever done. Not 6 months after finishing, I was hired to work for the World Youth Day 2002 National Office.

Now that was a preparation!

Still, we can't just prepare for a WYD with only prayer and devotions. We also have to do real work. And that has been my struggle this past year and a half. As many of you already know, I was appointed the Artistic Director of the next WYD, which will take place in Panama on January 22-27, 2019. Many of you also know that I was born and grew up in Panama. Can we say that a lot of the work I have been doing and experiences I've had for the last 40 years have been preparing me for this?

With God there are no coincidences!

Unlike the Olympics or the World Cup, there is no International WYD Office. World Youth Day is planned by a local committee that is set up in the host country. There is some minimal oversight by the Dicastery for Laity, Family and Life in Rome, but for the most part, the event is solely the responsibility of that local committee. That means that, in a matter of months, a whole corporation has to be created that operates a budget of anywhere between $40 million and $60 million, and that will employ hundreds of people and enlist thousands of volunteers. This corporation will have many departments: Administration, Finance, Legal, Fund-raising, Communications, Programs, Marketing and Commercialization, and what can be called "Pilgrim Services". Pilgrim Services includes things like Registration, Accommodations, and Meals. This corporation also has an Operations or Logistics Department that includes everything from transportation, security, and emergency services to sites and sanitation. The Programs Department would oversee all the content of the event: the main events with the Holy Father, all liturgical aspects, the Youth Festival, the Catechesis Sessions and all pastoral content for all events, as well as the Vocations Fair and the Confession Park. Communications would handle all media relations, public relations, design, website content, and social media. Add to this the fact that it's an international event and so all of these communications have to be available in five official languages (six if the local language is not Spanish, English, French, Italian, or Portuguese) and the communications to news media have to be done for media around the world. Plus, it's not the same communicating to secular media as it is communicating to Catholic media, so everything has to be said twice and in two different ways.

Did I say that WYD was a monster?

But working for WYD has not been anything but a joy. I am one of the very few (if not the only one) who has had the privilege to have been a director for two WYDs. Yes, there are struggles. Yes, there are times you want to quit. Yes, there is conflict. But there is great joy. One of the most joyful times in preparing for WYD is in what we call the Preparatory Meetings. These happen twice before a WYD: once just before the Palm Sunday after a WYD, in Rome, which serves also as an evaluation meeting for the previous WYD; and once about six months before a WYD, in the host country. 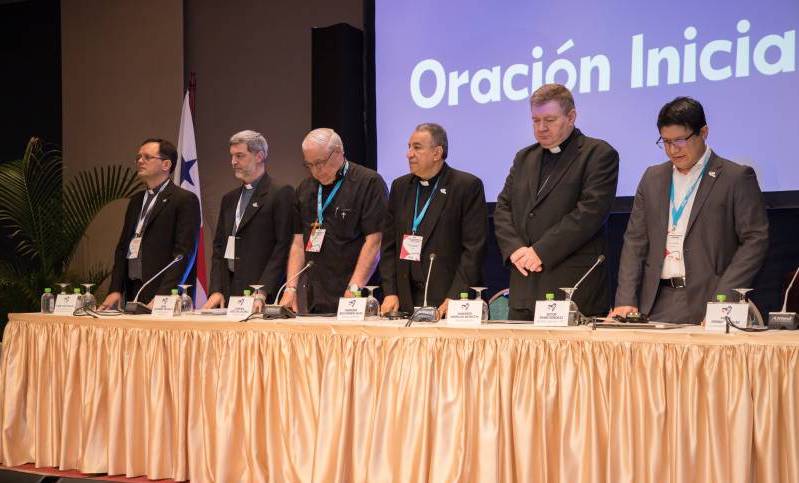 From Left to Right: Fr. Joao Chagas and Fr. Alexandre Awi Mello of the DLFL; Cardinal Jose Lacunza, Bishop of David, Panama; Panamanian Archbishop, Jose D. Ulloa; Apostolic Nuncio to Panama, Mons. Miroslaw Adamczyk; and Executive Secretary of the WYD Organizing Committee, Victor Chang.
The Second Preparatory Meeting for WYD 2019 took place last week in Panama. I have great memories of the one in Toronto in January 2002 and looked forward to the one in Panama with great expectation. My expectations were exceeded. We had some 125 delegates from 88 different countries that participated. There were: 19 delegates from Africa, representing 25 countries, 3 delegates from Oceania, Australia, and New Zealand, 40 delegates from Europe, representing 25 countries, and 18 delegates from 11 Asian countries. The American continent had the most representation: 48 delegates from 25 countries. Add to that the many participants that came from the eight ecclesial regions of Panama as well as those from the organizing committee. It was a great celebration of Church. The purpose of the meeting is very practical. The participants, in most cases, are the Youth Delegates from each Episcopal Conference. They are the ones who are, in a sense, responsible for all the pilgrims that will travel from their country. It is expected that they will want to know how Panama is preparing for WYD. They will want to know about accommodation, registration, communication, logistics, security, as well as getting to know the host country to better guide pilgrims of their respective countries. The presentations were mostly in Spanish but with simultaneous translation in the five official languages of WYD. Fr. Alexandre Awi Mello, Secretary for the Dicastery for Laity, Family and Life, presided over the meeting and was accompanied by Father Joao Chagas, who is head of the Youth Office of the Dicastery. 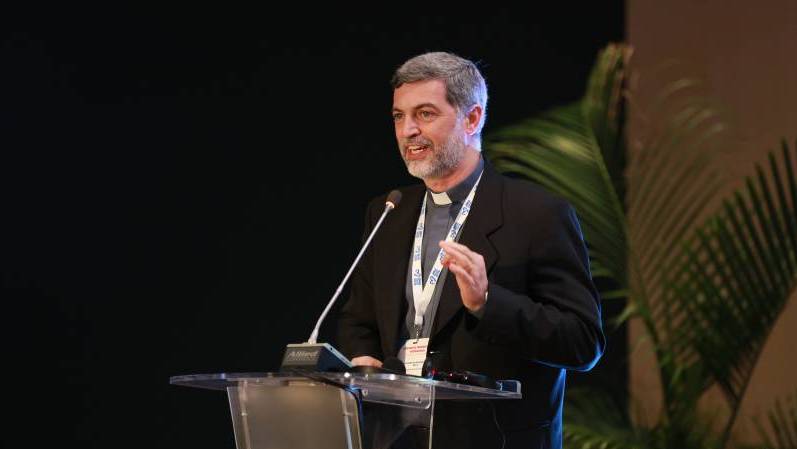 Fr. Alexandre Awi Mello, Secretary for the Dicastery for Laity, Family and Life.
Perhaps the highlight for most was the unplanned (I'm sure someone knew) visit of Panamanian President, Juan Carlos Varela. President Varela is known to be an outspoken supporter of WYD and boasted about having spent the night of the Vigil with pilgrims on Copacabana Beach in 2013. The president not only spoke to the delegates but also stayed to listen to questions (answering some) and then stayed to have lunch with the delegates. For me, however, the highlight was what it always is for me: the experience of Church. We preach that we believe that the Church is One, Holy, Catholic, and Apostolic. Most of us don't really get to experience what that means, until we go to something like a World Youth Day. The Church is universal. It is much larger than my own experience and what I see in my little parish. It is that, but so much more. The Church is One. We don't really get to appreciate the one-ness until we get to sit with someone from across the world and share a meal or a prayer. And yes, in those moments of one-ness and universal catholicity, I believe we get to experience the apostolic power that the Church has - a gift of the Spirit, no doubt. We also get to experience the holiness of the Church. We will see that in Panama next January, as many young people have been seeing and experiencing it since that first international WYD in Buenos Aires in 1987, but for a few lucky ones, we already experienced it last week. Want to know more? Check out www.panama2019.pa and join the WYD adventure!