Interested in Women Deacons? Read what Sebastian Gomes recently wrote on this topic. And the two interviews with Phyllis Zagano: Subject Matters and Witness with Fr. Rosica

Either the Church ordains women to everything, or we don’t ordain deacons.

There are two questions we have to answer: ‘What is Ordination?’ And ‘What is the Diaconate?’ 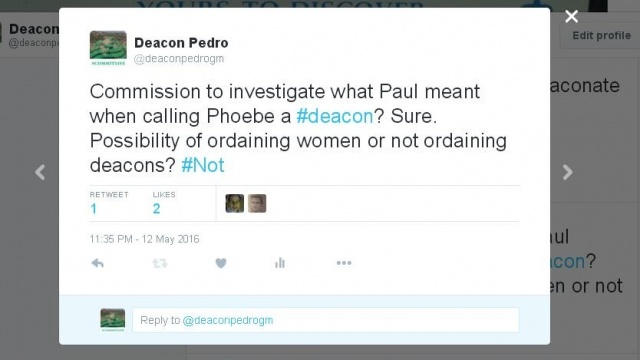 Read on.... what really happened?

Before we look at those two questions, let’s look at what really happened when Pope Francis met with representatives of the International Union of Superiors General on May 12, 2016. If you read the full transcript, you can’t conclude that the “pope made an announcement.” What he said was closer to, “I think that yes, that would be a good idea; to have commission to look at what women deacons have been in the tradition of the Church.” Pope Francis' comments regarding the diaconate were part of a response to the second question that, by the way, did not have to do specifically with including women among permanent deacons, but with the greater participation of women in the Church: “Can you give an example of where you see the possibility of better integration of women and consecrated women in the life of the Church?” After sharing some thoughts about what the Pope knows about “deaconesses” in the early Church and saying that the role and meaning is obscure (“it is not clear how it was”), the Pope said,

“I think I will ask the Congregation for the Doctrine of the Faith to refer me to some studies on this theme, because I have answered you only on the basis of what I heard from this priest, who was an erudite and able researcher, on the permanent diaconate. In addition, I would like to constitute an official commission to study the question: I think it will be good for the Church to clarify this point, I agree, and I will speak so as to do something of this type.”

The question that the commission would study is not the question of ordination of women to the diaconate; it is the question of what the role of deaconesses in the early Church was. The Pope said, “In the early times of the Church there were some “deaconesses”. But what were these deaconesses? Were they ordained or not? The Council of Chalcedon (451) speaks about this but it is somewhat obscure. What was the role of deaconesses in those times?” After saying a few more things about better integration of women in the life of the Church he went back and said, “So, with regard to the diaconate, yes, I agree and it seems to me it would be useful to have a commission to clarify this well, especially with regard to the early times of the Church.”

Not a new question

In a statement the following day, Vatican spokesperson, Fr. Federico Lombardi clarified that “Pope Francis did not say in his remarks to the Heads of female religious orders and congregations that he intends to introduce the ordination of women.” In his statement, Fr. Lombardi said that the question of women deacons and deaconesses is not a new question and had arisen in the past (In fact under Bl. Paul VI, St. John Paul II and Benedict XVI as we will see in the following weeks). Fr. Lombardi said, “The Pope did not say he intends to introduce the ordination of female deacons and even less did he talk about the ordination of women as priests. In actual fact, the Pope made clear in his preaching during the course of the Eucharistic celebration that he was not considering this (question) at all.” (I’m still trying to get my hands on the transcript of that homily.) He ended the statement by saying, that it was wrong to reduce all the many important things said by the Pope during his meeting with the religious sisters to this one question.

I would say that the real question has to do with a better integration of women in the life and decision-making of the Church. What prevents us from this is an attitude of clericalism that is prevalent in the Church: among clerics and among the laity. Pope Francis has spoken extensively about this. Why does one need to be a cleric in order to have a decision-making role in the Church? Pope Francis said that there was nothing stopping the Church from having a woman as a head of a Dicastery (Pontifical Council); that’s a place to start. I would add that it is also possible to have a woman as a rector of a seminary or even as Vatican Spokesperson. Wouldn't that be great? As to women preaching, it is already possible for a woman to lead a liturgy of the word and to preach at one. It is also possible, in the context of a Mass for the presider or homilist, after saying a few words, to introduce a woman (or anyone) to share a reflection. The reason why these don’t take place more often is clericalism. At the above-mentioned meeting with the religious superiors the Pope said that “clericalism is a negative attitude. And it takes complicity: it is something that is done by two parties, just as it takes two to dance the tango. … That is: the priest seeks to clericalise the layman, the laywoman, the man or woman religious, and the layperson asks to be clericalised, because it is easier that way.” He then shared a story from his time as Archbishop in Buenos Aires. “I had this experience three or four times: a good priest came to me and said, “I have a very good layperson in my parish: he does this and that, he knows how to organise things, he gets things done. … Shall we make him a deacon?” Or rather: shall we “clericalise” him? “No! Let him remain a layperson. Don’t make him a deacon”. This is important. It often happens to you that clericalism obstructs the correct development of something.”  Point well made.

Which brings me back to the question of deacons

The Pope begins his response to that second question by saying that this “touches on the problem of the permanent diaconate.” I am not sure what he meant by this statement, but I can tell you that I do believe that theologically, the diaconate presents us with a problem. The diaconate is not clear – it’s easy to explain it in terms of function, but not so easy to understand or explain it further and make a clear distinction between the diaconate and the laity, and the diaconate and other ministers of service. If you swing in the other direction, it’s hard to explain the theological distinction between the diaconate and the priesthood. That’s why I’d like to dedicate the next couple of weeks to exploring the question of the diaconate. But before I do so, I would like to point out that on May 26 this year*, I will have only been ordained four years. There are many deacons who can probably shed more light on this question than I. I encourage you to read Deacon Greg Kandra, Deacon William Ditewig and Deacon James Keating. I don’t know if they read my column, but if they do, I’d love for them to share their opinions with us. On this Pentecost Sunday* let's remember that the Church is guided by the Holy Spirit and no matter where she goes, we have to trust that's where the Spirit is leading. Next week we'll make a detour by explaining Holy Orders before we take a closer look at the diaconate. In the meantime, read this article by Fr. Dwight Longenecker. *This article was originally published on Pentecost Sunday, 2016. I was ordained on May 26, 2012.