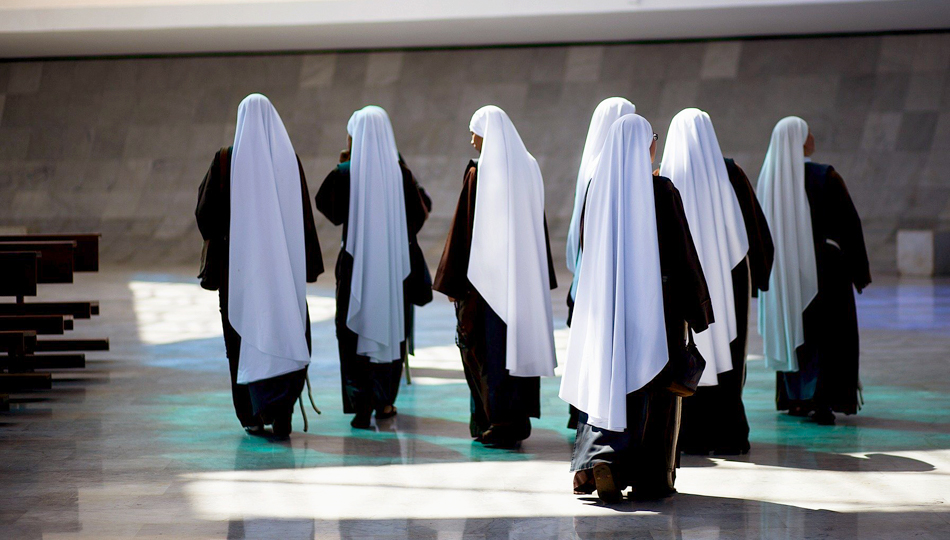 After looking a what it means to be called and the meaning of discernment, last week we looked at the most misunderstood vocation: The Vocation to the Single Life. There are many people who, while they are discerning, are very clear that they are not called to the Married Life, but are also not sure about being single. Perhaps that is an indication that you are called to live in community as a religious brother (monk) or sister (nun). I'm not sure about the accuracy of this (maybe someone can correct me if I am wrong), but my understanding is that in the early days of the church, many people felt called to live ascetic lives, or lives as hermits (eremitical monasticism). There was a tradition in Judaism of this type of lifestyle, as with the community of the Essenes - although they did not live hermetical lives, they lived in community. Hermits lived alone in caves or in secluded places that were more conducive to prayer and contemplation. (The word monk comes from the Greek 'monachos.' which comes from the word 'monos,' which means "alone.") In truth, some hermits would be found living in close proximity from each other - in a sense, a form of community. Eventually, close-knit communities began to form. The idea was that this gave the option of living the ascetic life to people who may not have had the skills to live a completely solitary life in the desert. The head of the monastery became known as 'Father.' In Syrian, 'Abba'; in English, 'Abbot.' Eventually, guidelines or 'rules' for this type of community monastic living began to develop. The best well-known are the rule of St. Basil and the rule of St. Benedict, who is called the Father of Western Monasticism. While the office of consecrated women (consecrated virgins) also goes back to the time of the Israelites, for women, the solitary ascetic or hermetical life was not very practical nor safe. This is why, after Christianity became the official religion of the Roman Empire, under Constantine, religious communities of women began to exist. The word 'nun' comes from the Latin 'nonna' which means grandmother. (This is also where the English word 'nana' comes from.) Today, there are many religious brothers and sisters. Some live the contemplative life. They live in convents or monasteries and dedicate their lives to prayer. Some contemplative religious congregations that you may have heard of are the Benedictines and the Carmelites. Some religious people are not contemplatives, but they still live consecrated lives, like the Franciscans or the Dominicans. Some non-contemplatives live in convents but work outside. Some wear habits and some don't. Some live in smaller communities of 3 or 4. You may find a pair of religious sisters who live in community together in an apartment downtown. It really depends on the congregation or community, their charism and the work that they do. There are hundreds of religious congregations. When I was in Chicago a few weeks ago at the National Religious Vocation Conference, there were some 250 religious congregations represented. Just as a married couple makes vows to each other, all members of religious congregations take public vows. This is a public profession of the Evangelical Counsels of poverty, chastity, and obedience. Perhaps you feel, because of your gifts, your interests and the opportunities that God has placed in your life, that you may be called to the religious life, as a brother or a sister. If so, you have a lot of choices and the process of discernment is sort of like a dating game in a way. All congregations and communities are different and have different charisms. Some are dedicated to teaching, others to healthcare. Others are contemplatives and dedicate their lives to prayer. Some communities are missionaries; some are dedicated to evangelization and others to promoting life. There is something for everyone. (If you are a woman and feel called to the Religious Life, but are not sure that community living is for you, there is also a tradition in the Catholic Church of 'Consecrated Virgins.' These are women who make vows but do not belong to a religious community. They are consecrated by their local Bishop and live and work in the world.) In general, if you are service-oriented, community-oriented, prayerful and you enjoy a simple lifestyle, perhaps the Religious Life is for you. If, on top of these, you are able to keep commitments, you are prepared to sacrifice and be challenged, you are at ease with solitude and silence, you love to read and study, maybe the contemplative life is for you. Check out these S+L films to learn more about religious life: This Side of Eden - A look at the lives of Benedictine Monks. A Day in the Life: The Carmel of St. Joseph - A look at the lives of Carmelite Sisters. Beloved - A look at the lives of Dominican Sisters of St. Cecilia. Come back next week so we can begin deacon-structing the vocation to the ordained life.

Every week, Deacon Pedro takes a particular topic apart, not so much to explore or explain the subject to its fullness, but rather to provide insights that will deepen our understanding of the subject. And don’t worry, at the end of the day he always puts the pieces back together. There are no limits to deconstructing: Write to him and ask any questions about the faith or Church teaching: pedro@saltandlighttv.org