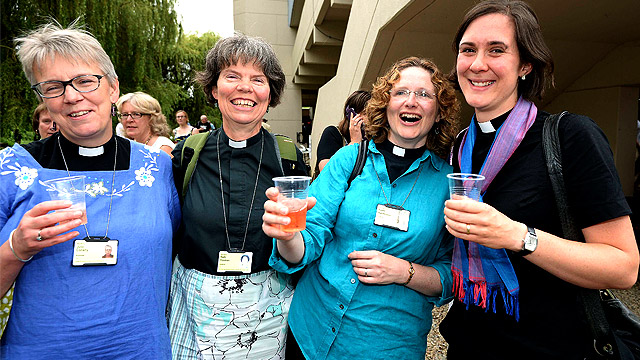 I could not speak about the Ordained life without speaking about the two questions that most people have about the priesthood: The ordination of women and celibacy. Some people will ask why women are not qualified to be priests. The reality is that it’s not about qualifications. No one is really qualified to be a priest-and no one really has a right to be a priest either. This issue is not one about rights, or equality. Nowadays people think equality means same-ness, but saying that men and women are equal, doesn’t mean that they are the same. One reason why we don’t have women priests is that there is no history in the Jewish tradition of having women priests. For the Jews, there was something very male about the priesthood. Another reason commonly given is that Jesus only selected men as his apostles. A common response to that is that times have changed. But Jesus didn’t really follow the norms of his time. He broke every rule. Men at the time could not even speak to (let alone touch) a woman who was not part of his family; Jesus did. In fact, he had many women as his disciples. Don’t you think that had it been appropriate to select women as apostles, he would have? Consider this: The number one disciple, Mary, his mother, would have been the best apostle. She would’ve been the best priest! She would’ve been able to say, ‘this is my body’ and really mean it. But Jesus didn’t choose her to be one of the twelve. Something else to consider comes from John Paul II’s Theology of the Body. In my series on the Sacraments I mentioned that every Sacrament is a marriage – a marriage between Heaven and Earth. The Eucharist is like a marriage. This means that Christ is the bridegroom and the Church is the bride; there is something very male about the priesthood (We may have to deacon-struct this some more at another time.) All these reasons that I’ve given will probably not fully satisfy anyone, but they are something to think about. The truth is not that the Church doesn’t want to ordain women; the Church doesn’t have the authority to change the designs that Christ instituted. The Church doesn’t have the authority to ordain women anymore than the Church has the authority to change the definition of marriage. When the question of the ordination of women arose in the Anglican Church, Pope Paul VI, reminded Anglicans of the position of the Catholic Church:

"She holds that it is not admissible to ordain women to the priesthood, for very fundamental reasons. These reasons include: the example recorded in the sacred scriptures of Christ choosing his apostles only from among men; and the constant practice of the church, which has imitated Christ in choosing only men; and her living teaching authority which has consistently held that the exclusion of women from the priesthood is in accordance with God's plan for his church."

(Paul VI, Response to the Letter of His Grace the Most Reverend Dr. F.D. Coggan, Archbishop of Canterbury, concerning the Ordination of Women to the Priesthood (November 30, 1975) In 1994, Pope John Paul II wrote an Apostolic Letter on reserving priestly ordination to men alone:

"At the present time in some places it is nonetheless considered still open to debate, or the Church’s judgment that women are not to be admitted to ordination is considered to have a merely disciplinary force. Wherefore, in order that all doubt may be removed regarding a matter of great importance, a matter which pertains to the church’s divine constitution itself, in virtue of my ministry of confirming the brethren, I declare that the Church has no authority whatsoever to confer priestly ordination on women and that this judgment is to be definitively held by all the Church’s faithful."

Apostolic Letter Ordinatio Sacerdotalis, on Reserving Priestly Ordination to Men Alone. The same applies to the ordination of permanent deacons. As opposed to Ordination, priestly celibacy was not instituted by Christ and is not a Church doctrine. Nonetheless it is an important part of our tradition. It is a discipline that many priests were living in the early Church because they saw how it helped their priesthood. In the early centuries there were married priests. Some of the apostles were married. We know Peter was married at some point because Jesus healed his mother-in-law (Matthew 8:14). The immediate successors to the apostles were also allowed to marry. Paul writes to Titus that a bishop should be “the husband of one wife” (Titus 1:5-7) and priests in the old testament were also married, but forbidden from having sexual relations for one day before offering sacrifice (which is really interesting because in the Catholic Church, the priest offers sacrifice every day). Today, the celibate priesthood is a discipline. It’s also practical. But it is not doctrine. It is possible for this discipline to be lifted. There is a tradition of ordaining married men to the priesthood in the Eastern Rites (Catholic) Churches and, as we’ve already seen, married men, can be ordained as permanent deacons. If you are married you can be ordained. But if you are first ordained, you cannot marry (so if the wife of a priest dies, he cannot re-marry). There are also many Roman Catholic priests who are married – this can happen when a married priest in a Christian denomination (like Anglicanism) converts to Catholicism, both their ordination and marriage are considered valid. Let me add that for those who think that lifting the requirement to celibacy would end the problem of pedophilia in the priesthood and would solve the vocations crisis; it's been proven that, first there is no vocations crisis (just take a look at seminaries in Africa) and it's also been proven that there is no connection between sexual perversion and the choice to abstain. There are hundreds of articles written on these two topics. I heard someone once say that he didn’t like to think of celibacy as just a discipline, but rather as a gift. I think celibacy is as a call to love in an extraordinary way. This, I think I also got from the Theology of the Body: Just as sex is a means to love or a part of love, so is celibacy. (Also, in the same way that sex can be mis-used by being taken out of the context of love, so can celibacy.) A celibate priest is fulfilling his nature to love. Thomas Merton said that if a man is afraid of love, he should not be a priest. A priest is a servant, so he has to be able to love. He has to be in love with Christ and the Church! Let me end by saying that we forget that priests are human just like us. No priest is perfect or an angel sent from heaven. I know I’ve been critical of priests but there’s so many great priests, bishops and deacons - men who are truly the face of Christ on earth. We have to pray for priests, for their strength and pray for vocations. We may not understand all there is to understand, but that’s what faith is, no? Come back next week so we can start deacon-structing the vocation to married life.