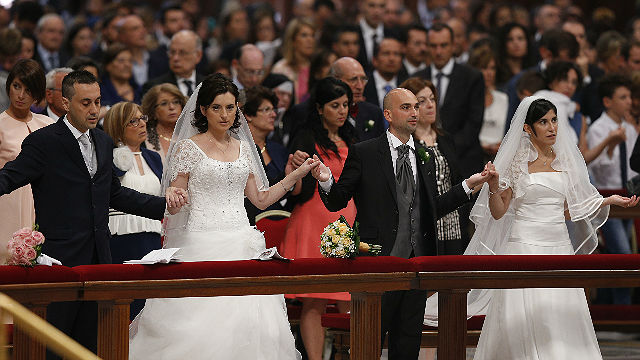 So far we’ve looked at the Vocation to the Single Life, the Vocation to the Religious Life and the Vocation to the Ordained Life part 1, part 2 and part 3. Let’s look at the other Vocation that is also a Sacrament: Marriage. The majority of people are called to married life. Remember that for Catholics, Marriage is a Sacrament. That means that a married couple makes Christ present to each other and to the world – what a perfect vocation that is! I would say that Marriage is the sacrament of Sacraments. All the Sacraments point to the Eucharist, but, St. Pope John Paul II calls marriage the “Primordial Sacrament” because it existed before all the others. In fact, it existed before the Fall of Adam and Eve. The first thing God does after He creates Adam and Eve is create Marriage. I also say that Marriage stands apart because, as I said last time all the other Sacraments are a marriage. A Sacrament is a marriage of the human and the divine, so in marriage, we live exactly what a Sacrament is: the relationship between God and humans. Remember that a Sacrament is an outward sign instituted by Christ to give Grace. For many of us, this definition doesn’t really mean much. I mean, there is such a distance between God and me: I am physical and God is Spirit. I am visible and God is invisible. I am temporal and God is eternal. I am human and God is divine. But in the sacraments I am able to encounter the divine, eternal, invisible God in our own temporal, physical and human world. Through the sacraments we can see this invisible God, we can touch him and we can be in communion with him. God meets us where we are as earthly, bodily creatures. It’s like in the Sacraments the human and the divine kiss. Sacraments are a marriage between heaven and earth where God and humanity become ‘one flesh’. The first chapter of Genesis tells us that God created man and woman in “his image and likeness." He then says “be fruitful and multiply” (Genesis 1:26-28). He is creating marriage. This passage tells us that it is in the fruitful and total union that can only take place between one man and one woman that we come closest to being an image of God. In Marriage we come closest to being an image of God because in Marriage we are able to love another person the way God loves us: freely, faithfully, fruitfully and totally. Of these four qualities, the first three (free, faithful and fruitful) are necessary for all types of love. But the last – the “totality of love” – is unique to the way God loves us and is only necessary in the kind of love that a husband and wife are called to have. In Genesis chapter two, after God creates Adam and Eve, it says, “therefore a man leaves his father and his mother and clings to his wife and they become one flesh.” (Genesis 1:26-27) In Marriage, the husband and wife become one flesh (that’s the mystery or “metaphysical occurrence” that takes place). Have you ever wondered why it’s necessary for the husband and wife to become one flesh? Our sexuality (which belongs in Marriage) is unitive because of the children (which are the fullest expression of the fruitfulness of the sexual act). The Church doesn’t say that there have to be children, but the couple has to be open to children. This makes sense; otherwise there is no need for Marriage. God said, ‘be fruitful and multiply’. In order to do that, we have to procreate. But to procreate is not just making babies. Procreation is also bringing the children up. Do you think that it’s an accident that you need a male and a female to procreate? You need a male and a female to procreate because you need a male and a female to bring up the child. This is difficult to say because we all know children who grow up in single parent homes and are fine, but can we deny that the best place to bring up a child is in a loving home, with their biological parents who are healthy and functional and who love each other freely, totally, faithfully and fruitfully? That’s what marriage is: an institution created by God, where two people can love each other freely, faithfully, fruitfully and totally in order to safeguard our sexuality, where we come closest to being an image of God. This institution provides the best environment where parents can bring up children the best way possible. The nature (God’s design) of Marriage is that it is unitive and procreative. The unity is necessary for the children that are procreated to be brought in the best way possible. Next time, let’s look at what makes a Catholic Marriage.