Deacon-structing the Way of the Cross 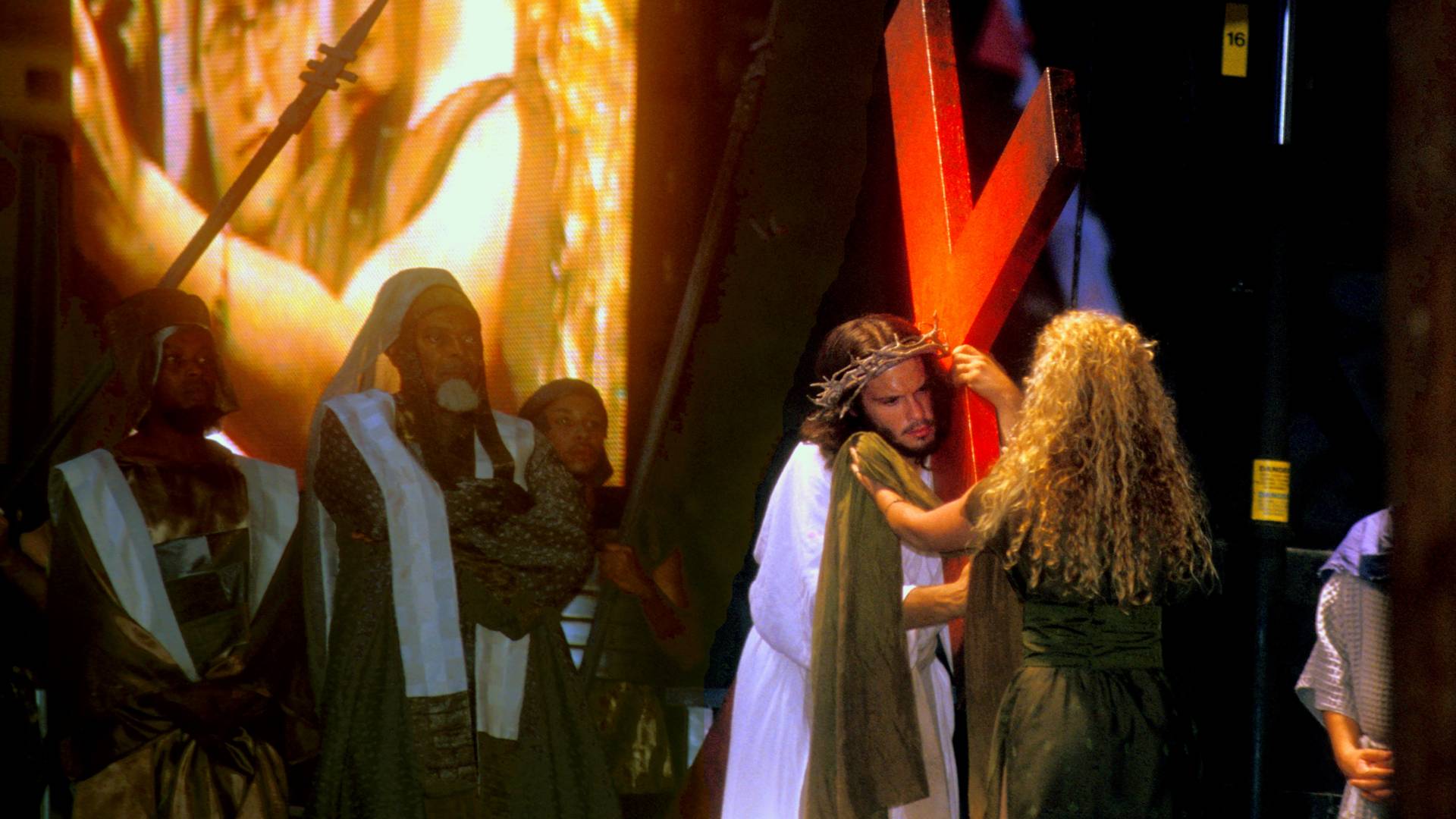 Veronica (April Mullen) wipes the face of Jesus (Robert Légère) at the Way of the Cross, World Youth Day Toronto 2002. Photo courtesy of Bill Wittman.
Since these past weeks we’ve been looking at traditional prayers and devotions to St. Joseph, and since it is Holy Week, I’d like to look at one particular Lenten Devotion that dates back to the 12th century. The Stations of the Cross, also known as the Way of the Cross or, in Latin, Via Crucis, consists of a series of 14 “stations” that follow the path of Jesus on his way to the Cross. These Stations are often depicted as paintings or sculptures and usually found inside a church, although they may also be outside, where pilgrims can walk from station to station. The object of the Way of the Cross is to help us pray, in the spirit of pilgrimage, with Christ on the road to Calvary. The devotion began as real pilgrims made their way to Jerusalem and walked the Via Dolorosa, a processional route through the streets in the Old City of Jerusalem, leading from the old Antonia Fortress (where Jesus would have been condemned to death), to the Church of the Holy Sepulchre. Even though this route was not officially established until the 18th century, it is believed traditionally that this is the route that Jesus walked from his place of condemnation to the place of his execution and burial. If you go to Jerusalem today, you will find nine signs marking the route along the streets, the remaining five being inside the Church of the Holy Sepulchre. These markings have been in place since the 15th century. There are records of pilgrims traveling to Jerusalem for this purpose as early as the 3rd century. Of course, it was St. Helena, the mother of the Emperor Constantine, who, in the late early 4th century, made a pilgrimage to the Holy Land and is said to have found the wood of the true Cross. Around that same time, a woman named Aetheria wrote about a procession with chanting of psalms from each of the three holy buildings (at the time) on the hill of Calvary. This was not quite the Way of the Cross as we know it today, but many consider it to be its beginnings. In the 12th century, Jerusalem fell into the hands of Saladin, the first Sultan of Egypt and Syria. All Christians were expelled, and it was impossible to travel to the Holy Land on pilgrimage. Franciscans then began recreating the “way of the Cross” in Europe. Soon, many others were doing the same. At the time, the number of stations was not determined and varied anywhere from seven up to thirty. In the 13th century we find mentions of “stations of the cross” not as this particular devotion but as the path, marked by a series of “stations”, which Jesus walked on his way to Golgotha. In 1686, Pope Innocent XI gave the Franciscans permission to display these Stations inside their churches. In 1731, Pope Clement XII extended this permission to all churches. By this time, the devotion was already set at fourteen stations. These “stations” represent not just things that happened on the way to Calvary but the moments when Jesus stopped on his journey. We are invited to bring these moments to meditation.

Sometimes, a 15th station is added, marking the Resurrection of Jesus. In 1988, as a complement to the Via Crucis, another devotion was invented, the Via Lucis, or Way of Light – the Stations of the Resurrection. Because several of the traditional stations of the Way of the Cross are based on Tradition and not Scripture, in 1991, Pope John Paul II proposed stations which are more aligned with the biblical accounts. These are referred to as the Scriptural Way of the Cross. These Stations are:

1. Jesus in the Garden of Gethsemane 2. Jesus is betrayed by Judas and arrested 3. Jesus is condemned by the Sanhedrin 4. Jesus is denied by Peter 5. Jesus is judged by Pilate 6. Jesus is scourged and crowned with thorns 7. Jesus takes up his Cross 8. Jesus is helped by Simon of Cyrene to carry his Cross 9. Jesus meets the women of Jerusalem 10. Jesus is crucified 11. Jesus promises his kingdom to the repentant thief 12. Jesus entrusts Mary and John to each other 13. Jesus dies on the Cross 14. Jesus is laid in the tomb

There is no one way to pray the Stations of the Cross; it is enough to meditate on these moments together with Christ. You can pray them sitting down; however, ideally, they should be done as a mini-pilgrimage, walking from station to station. It is also helpful to have a guide or set of meditations that you can read as you walk the stations. Of these, thousands exist! Nowadays, you can find many videos online that you can watch and pray with, as well as audio programs with the stations. (Here are two good ones from Salt + Light Media: Journey to the Cross and At the Foot of the Cross,) Whether you are praying the stations on your own or with a group, it is common to begin each station by announcing the title of the station, followed by the following verse and response:

V. We adore You, O Christ, and we praise You. R. Because by Your Holy Cross You have redeemed the world.

A short reading of the Scripture passage follows, or, if it’s not one of the scriptural stations, a different Scripture verse can be used. A brief meditation follows, ending with a short prayer. You may end each station by reciting the Lord’s Prayer, the Hail Mary, and the Glory Be. If you are walking from station to station, the verse of a song can be sung while you walk. Many of you will remember the Good Friday Stations of the Cross led by Pope John Paul II at the Roman Colosseum. This tradition began in the 18th century with Pope Benedict XIV. It was revived in 1964 by Pope Paul VI. But it was Pope John Paul II who made it a worldwide television event. For many years, the pope himself carried the cross from station to station. However, in later years, different groups participated: victims of human trafficking, refugees and migrants, young people, families... Those of you who have attended a World Youth Day will also know that the Stations of the Cross are traditionally done on the Friday of the week. This WYD tradition began in Denver in 1993 with a group of young actors moving from station to station with the WYD Cross inside a packed stadium. Many of us remember fondly the Way of the Cross that closed down University Avenue in Toronto for WYD 2002 and also the stations from Sydney 2008, Rio de Janeiro 2013, and Krakow 2016. Good Friday in Rome in 2020 was definitely a memorable one, taking place in an empty St. Peter’s Square. Two groups, one from the Italian prison system and the other from the Vatican’s health services, carried the cross from station to station around the square as reflections written by inmates, prison guards, chaplains, and family members were shared. This year, Pope Francis will again preside over the Stations of the Cross in St. Peter’s Square. Two troops of Italian scouts from Rome and Umbria prepared the meditations and youth from two group homes in Rome have created the illustrations to accompany the prayer. I hope you can watch our broadcast on Salt + Light TV. (Click here for our complete schedule of Holy Week liturgies broadcast from the Vatican.) Tradition is that the Stations are prayed every Friday during Lent, especially on Good Friday. It is common for people to visit their parishes and walk the Stations at the back of the Church as they pray. However, the Stations of the Cross can be prayed anywhere, anytime. Whether you are sitting in your living room, walking at an outdoor grotto in a nearby shrine, or watching them on the Friday of World Youth Day, or on Good Friday on your TV, remember that you are still making a pilgrimage as you meditate on the sacrifice Jesus made, out of extreme and total love, for you and for me.

Categories:
Deacon-structing
Lent and Easter
Tags:
Stations of the Cross
Via Dolorosa
Way of the Cross