Deacon-structing the Mass | Part 9: Deeper into the Eucharistic Prayer 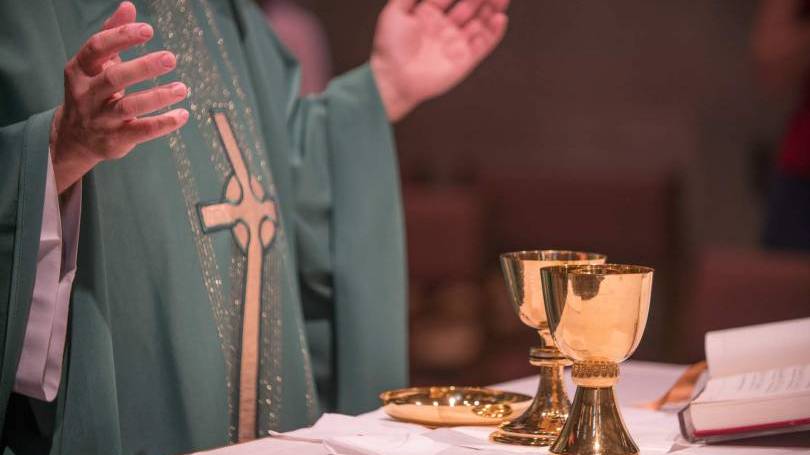 Salt + Light
For the last 9 weeks we’ve looked at each part of the Mass with the hopes that this will help us enter into the mystery in a deeper way. We’ve looked at the Entrance, the Penitential Rite and the Gloria. Then we looked at the Liturgy of the Word, which includes the Readings, the homily, the Creed, and the Prayers of the Faithful. Two weeks ago we introduced the Liturgy of the Eucharist and explained the Preparation of the Gifts. Last week we spent some time with the Eucharistic Prayer, looking at each individual part and specifically what we do at each moment. This week, I’d like to offer more of a reflection on the Eucharistic Prayer because, for most of us, I think, this is a part of the Mass that completely goes over our heads. This beautiful prayer begins with the Preface, which begins with a thanksgiving: the priest inviting us with “the Lord be with you…” We lift up our hearts to the Lord, and we rightly and justly give thanks to the Lord our God. Remember that a few weeks ago we learned that “the Lord be with you” is modeled on Christ’s greeting to his disciples after the resurrection (John 20:19). The response, “and with your spirit,” is also scriptural (see Gal 6:18; Phil 4:23; Philemon 25 and 2 Tim 4:22). “Lift up your hearts” is also scriptural (see Lamentations 3:41). So is “give thanks to the Lord.” There are so many scriptural verses about thanking the Lord (see 1 Chronicles 16:34, Isaiah 12:4, and Col 3:17). There are also many scripture passages that speak about righteousness and justice or things that are right and/or just (see Col 1:3). We haven’t been pointing out all the scriptural references in the Mass, but this highlights how much the Mass is based on Scripture. 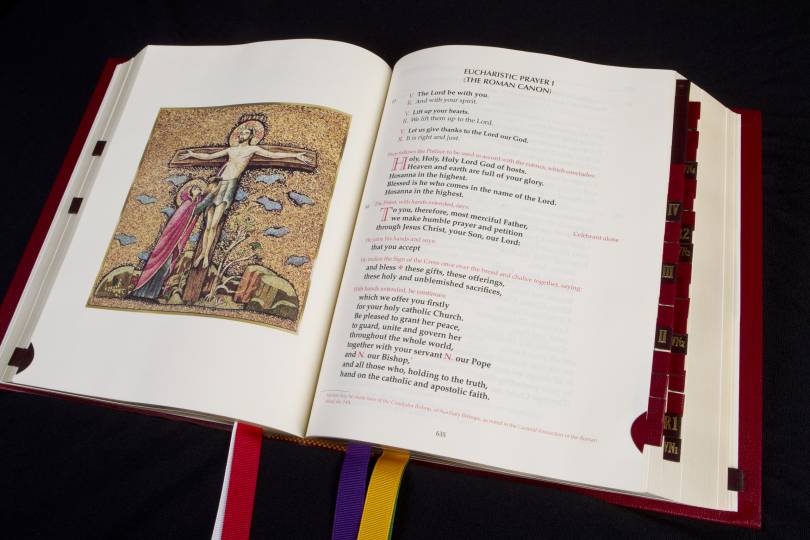 CNS photo/Nancy Phelan Wiechec
There are thirteen versions of the Eucharistic Prayer (although the first four are the most common). They all follow the same format (GIRM 79):

The Sanctus and Epiclesis

Still in the Preface, after the Thanksgiving comes the Holy, Holy or the Sanctus. This acclamation of God’s holiness three times is found in several places in Scripture. The prophet Isaiah describes a vision of the Almighty and the seraphim that called to one another singing, “Holy, holy, holy is the Lord Almighty; the whole earth is full of his glory” (Isaiah 6:3). In Revelation, John describes a similar scene where the four living creatures never cease to sing, “Holy, holy, holy, is the Lord God Almighty, who was and is and is to come!” I guess that’s why the Priest, in the Preface, introduces the Sanctus by saying, “And so, with angels and archangels, with thrones and dominions, and with all the hosts and powers of heaven, we sing the hymn of your glory, as without end we acclaim.” The rest of the Sanctus is taken from Matthew 21:9, Mark 11:9-10, and John 12:13 (Blessed is He who comes… Hosanna in the highest). No need to repeat that the Holy, Holy must be sung by everyone, not just the choir. I would add that since it’s a song of praise, it should be a melody/song that is conducive to praise. For those so inclined, this is a part of the Mass when you can lift up your arms in praise!

In most dioceses in North America, the norm is that all kneel after the Holy, Holy.

The Sanctus is followed by the Epiclesis, which is a Greek word meaning “invocation” or “calling down from on high”. This is when the Priest calls upon the Holy Spirit to descend on the bread and the wine that have been offered so that they will become the body and blood of our Lord Jesus Christ. The Priest extends his hands over the gifts, and the altar server rings a bell. The most common Eucharistic Prayer is number two, and in that one it’s really easy to identify the Epiclesis:

“Make holy, therefore, these gifts, we pray by sending down your Spirit upon them like the dewfall, so that they may become for us the Body and Blood of our Lord Jesus Christ.”

However, if you’re not sure when it happens, just look for the place when the Priest extends his arms over the gifts. Hopefully in your parish the servers ring a bell at this point. Our Catechism teaches that it’s the Holy Spirit by which the bread and wine become the body and blood (CCC 1333). This is the moment. Even though it’s the priest who says the words, it’s good for all of us at Mass to also ask for the Holy Spirit to descend. (In fact, in the rite of every Sacrament, there is an epiclesis, when the Holy Spirit is called down in order to effect the Sacrament.)

The epiclesis is followed by the words of Institution or Consecration. This is when the bread and wine actually transubstantiate into the body and blood, soul and divinity, the real presence of Jesus Christ. Most of us would think that these words are taken from the Gospels, but in fact, the words of Institution come from the oldest narrative of the Last Supper, which is from Paul’s first letter to the Corinthians (1 Corinthians 11:23-25). I think, even though we may not completely understand transubstantiation, most of us understand the significance of this part of the Mass.

But there’s still more than half the Eucharistic Prayer left!

The Consecration is followed by what we call the Anamnesis, which means “remembering”. In fact, in Scripture, every time the word “remembrance” is used in English, the original Greek is anamnesis (look at Luke 22:19 or Hebrews 10:3, for example). The Priest says, “the mystery of faith” (mysterium fidei), and we respond with one of three formulas, most commonly:

“We proclaim your Death, O Lord, and profess your Resurrection until you come again.”

Remember that the Eucharist is a remembrance, a memorial offering that we present to God. The “mystery of our faith,” in fact, is the earliest profession of faith. That’s it. That’s what it’s all about. Here is a wonderful little moment when we join out loud in the prayer with the Priest. Yes, we believe in what Jesus did; we believe in what just took place in our midst; we proclaim, we profess, we believe.

The Eucharistic Prayer then continues with what’s called the Oblation, which means “offering.”

Here is when I usually start tuning out of the prayer.

It helps me to remember that, even though it’s the priest who prays, I am part of the gathering, uniting myself to Christ in his offering. We are also offered. We also become one body in Christ. Read what the priest says in the Eucharistic Prayer III:

“…Look, we pray, upon the oblation of your Church and, recognizing the sacrificial Victim by whose death you willed to reconcile us to yourself, grant that we, who are nourished by the Body and Blood of your Son and filled with his Holy Spirit, may become one body, one spirit in Christ. May he make of us an eternal offering to you…”

The Oblation is followed by the Intercessions. They are exactly that: we pray for everyone. This is the part when the priest mentions Mary, the apostles and martyrs, the pope, the bishops, priests, deacons, those who have died… Did I say, everyone? 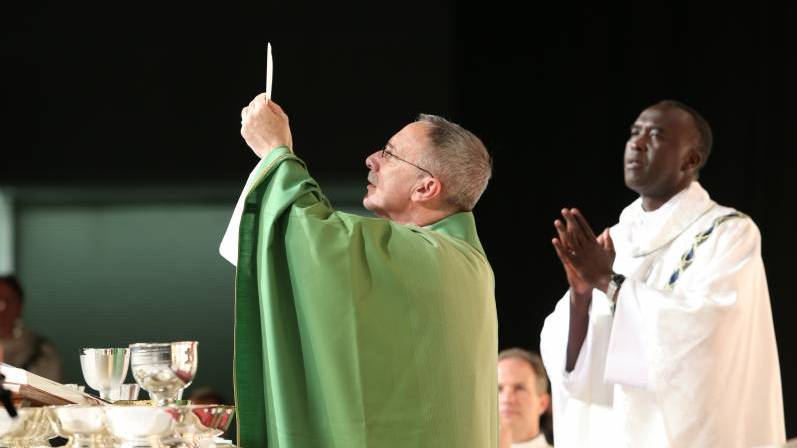 CNS photo/Michael Alexander, Georgia Bulletin
Finally, the Eucharistic prayer concludes with the Doxology and the Great Amen. The Priest takes the paten with the host, the Deacon takes the chalice, and they raise them in offering. The Priest says or sings:

“Through him, and with him, and in him, O God, almighty Father, in the unity of the Holy Spirit, all glory and honour is yours, for ever and ever.”

We all respond with a resounding Amen!

This Amen is not a conclusion to the Doxology but to the whole Eucharistic Prayer. We are saying Amen to everything that began with the Preface just before the Holy, Holy! It is absolutely appropriate that it should be sung. Someone once told me that Jesus’ final prayer in John 17, is a sort of Eucharistic Prayer. This prayer is sometimes referred to as Jesus’ High Priestly Prayer. You may not find exactly all the elements listed above, but I think when you read it, you’ll hear a similar tone to the Eucharistic Prayer.

Maybe that should be your homework: Read John 17, meditate a bit on that, and then recall your experiences with it while you’re at Mass next.

Next week, let’s continue with the Communion Rite. [Most of the information used in these blog posts comes from the text of a video made by Salt + Light Television in partnership with the National Liturgy Office of the Canadian Conference of Catholic Bishops in 2011, to help explain the latest changes to the language of the English Roman Missal, titled, THE CELEBRATION OF EUCHARIST for the Twenty-First Century. The project was headed by Fr. Bill Burke and the text of that video was written by Canadian liturgist Margaret Bick, both of whom I owe a great deal of thanks for the vast knowledge they shared with us.]