Deacon-structing the Mass | Part 3: The Penitential Rite, Gloria, and the Collect 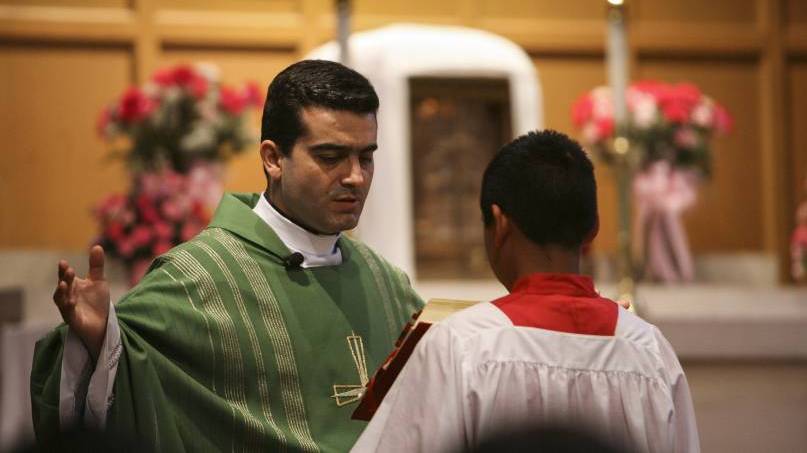 CNS file photo/Nancy Phelan Wiechec
Two weeks ago we learned that it is our right to fully, actively, and consciously participate in the Mass. How can we do that if we don’t know what everything means? Over the next few weeks I hope that we can explain every part of the Mass in order to help you enter more deeply into the Mystery of the celebration. Last week we looked at the Entrance, the Reverencing of the Altar, and the Greeting, which are part of the Introductory Rites. I received a note from Roy Lee regarding the use of the Entrance Antiphon vs. an opening hymn. Roy writes:

That is a very good suggestion and perfectly permissible for those who are able to do it well (doing it well and congregationally, I note, is important). Thank you Roy for that comment. Still in the Introductory Rites, immediately after the Greeting is the Penitential Act. We know this part because it is when we typically pray the “I Confess”.

We should all be familiar with the mystery of faith: “Dying Christ destroyed our death; rising He restored our life and He will come again.” In a way, this is the simplest profession of Faith. Right off at the beginning of Mass, we begin by calling to mind this mystery of faith. This is done during the Penitential Act. Most Presiders (the presiding priest) will invite us to remember our failings in order to prepare for these “Sacred Mysteries.” In the Penitential Act we recall our constant need for God’s unconditional mercy and love. There are three forms that the Penitential Act can take: 1. The “I Confess” (Confiteor). In it we ask for the help of God, the angels, saints, and one another in responding to Jesus’ offer of fullness of life. 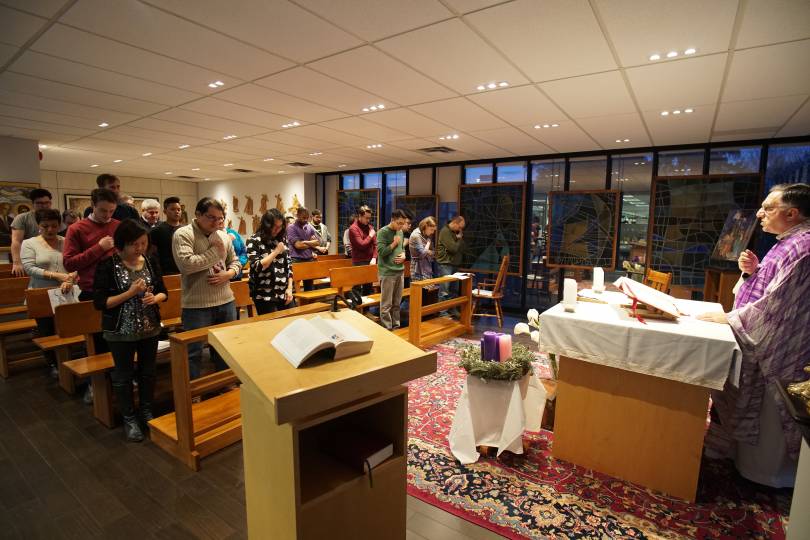 Salt+Light file photo
2. A brief responsory imploring God’s mercy. The Kyrie refrain which follows each of these first two forms, whether sung or spoken, should involve everyone. The Presider or the Deacon will say a brief antiphon followed by “Lord, have mercy (or the Greek, Kyrie Eleison), to which the congregation responds by repeating the responsory. It’s a three-part formula: Lord, have mercy; Christ, have mercy (Christe Eleison); and then again, Lord, have mercy. It can be sung or spoken. It is not typical in Canada for the deacon to lead the "Lord, have Mercy," but it is appropriate and is done in many dioceses around the world. The Rite of Blessing and Sprinkling of Holy Water, best used during the Easter season, can be used to replace this second form. In it we recall our baptism. The Presider or Deacon will walk among the congregation sprinkling everyone with Holy Water. He should make an effort to use a generous amount of water in order to ensure that the water touches everyone (and it's more fun). 3. The third form of the Penitential Act is not very common. It allows for some variety and even creativity (which is probably why it’s not common). We are not to formulate apologies or lists of our sins and weaknesses but rather invocations recalling Christ’s saving work on our behalf. This form focuses on Christ’s mercy, not on our sinfulness. If the first formula is used, it is still appropriate that the penitential rite be followed by the Kyrie Eleison or "Lord, have mercy". The Kyrie is a chant and can be sung. Each acclamation is typically pronounced twice, but it can be repeated more than twice.

The Gloria in Excelsis is sung only on Sundays, Solemnities and other highly festive days. It is not sung during Advent or Lent. The General Instruction of the Roman Missal (GIRM) calls it a most ancient and venerable hymn by which the Church, gathered in the Holy Spirit, glorifies and entreats God the Father and the Lamb. The opening lines are taken from the song of the angels to the shepherds on the night of the birth of Christ (Luke 2:14). Since it was originally written as a hymn (and inspired by the song of the angels), it must be sung and an effort should be made to enable everyone to sing it (again, it must be congregational). The text of the Gloria may not be replaced by any other. 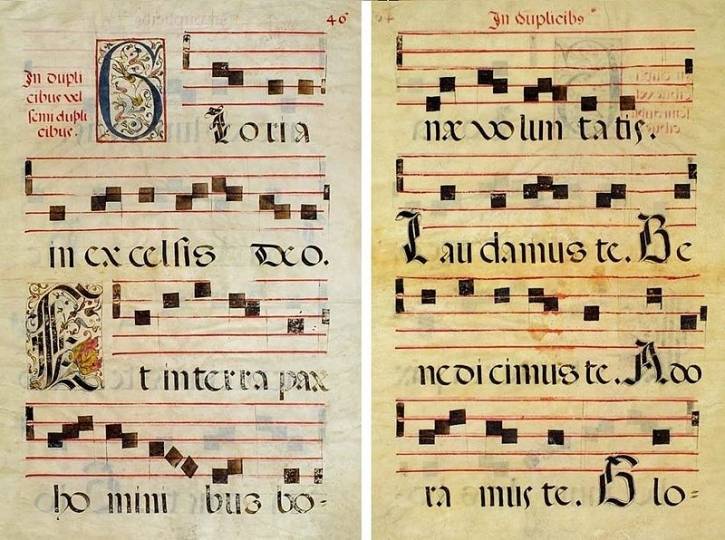 This is what we colloquially refer to as the “opening prayer”. It begins with the priest’s invitation: “Let us pray.” Many of us find that structure and phrasing of these make the prayers very difficult to understand, but the Collect follows a predictable pattern. It begins by naming God and briefly calling to mind the marvelous deeds God has done in our midst. The prayer then gives voice to the deepest longings, needs, and concerns of the people gathered. They are difficult to read because it’s usually one long sentence. This is why it’s important for the Presider to read the Collect before Mass so he gets the right phrasing and pauses. He should make an effort to read it well and not speed through it. This will help the congregation understand better. This is the one place at Mass where I think the use of a Sunday Missal is good: If you have a hard time following the Collect—read along! When was the last time you paid attention to the Collect? I find that, usually, the Collect can help me focus on the theme of that day's Mass. Try it next Sunday! The prayer ends with the familiar “through Christ our Lord”. Jesus did say that we should ask everything in his name (John 14:13). This ending also expresses the truth that this prayer and the whole celebration, by the presence and power of the Holy Spirit, is an action of Christ the Lord and Head—and only mediator—and of his Body, the Church.

The Collect is called so because the Presider is “collecting” all our prayers. He then “takes” all our prayers and presents them to God using the words that the Missal has prescribed. This is why we need to come to Mass with an idea of what we are praying for. When the Presider says, “Let us pray…” he should allow for a brief period of silence (about the amount of time that it would take to read the prayer in your head) so the congregation can respond to this invitation. This is a time to actually pray: What are you offering at Mass today? Then, with the spoken prayer, the Presider gives voice to the collective silent prayer of the whole assembly. We should not be afraid of silence in the Liturgy. The General Instruction says that sacred silence is to be observed at the designated times (such as right after, “let us pray”). Depending on when it takes place during the Liturgy, silence may have a different meaning. In the Penitential Act and again after the invitation to pray, we recollect ourselves. After a reading or after the Homily, we meditate on what we’ve heard. After Communion, it’s a time of prayer, praise, and thanksgiving. The GIRM also reminds us that even before the celebration has begun, it is good to observe silence in the church, in the sacristy, and in any adjacent areas, so that “all may dispose themselves to carry out the sacred celebration in a devout and fitting manner.” Send me your comments and come back next week so we can begin looking at the Liturgy of the Word.

[Most of the information used in these blog posts comes from the text of a video made by Salt + Light Television in partnership with the National Liturgy Office of the Canadian Conference of Catholic Bishops in 2011, to help explain the latest changes to the language of the English Roman Missal, titled, THE CELEBRATION OF EUCHARIST for the Twenty-First Century. The project was headed by Fr. Bill Burke, and the text of that video was written by Canadian liturgist Margaret Bick, both of whom I owe a great deal of thanks for the vast knowledge they shared with us.]