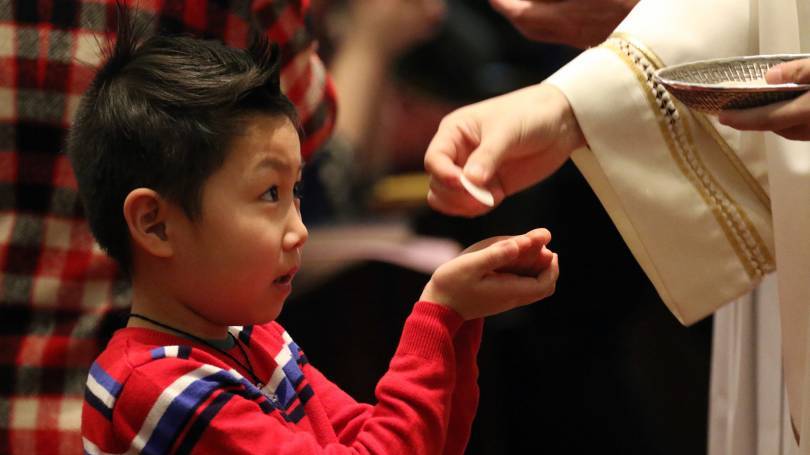 CNS photo/Gregory A. Shemitz
I began this series by reminding you that we should be participating more actively, deeply, and consciously in the Mass. We then looked at the Entrance, the Penitential Rite and the Gloria.  Then, in the Liturgy of the Word we looked at the Readings, the homily, the Creed, and the Prayers of the Faithful, the Liturgy of the Eucharist, and the Eucharistic Prayer. We actually went back to the Eucharistic Prayer, because there's so much to say about that part of the Mass. Last week we began with the Communion Rite, which begins with the praying of the Lord's Prayer and includes the Sign of Peace, the Lamb of God, Communion, and the Prayer after Communion.

Most of you would agree that sharing in the Eucharist is the high point of the entire celebration. Even though we can’t truly say that it’s all about receiving Communion, Holy Communion seals the sacrificial nature of the meal in which we make memory of Christ’s Passover. The Church does teach that the Eucharist is the source and summit of our Christian life. But, Communion in the absence of the rest of the Mass doesn’t quite make sense either. God calls us to covenant in the Liturgy of the Word, and we respond in the Eucharistic Prayer. Each of us then comes forward in the Communion procession to renew our personal participation in that covenant in the Body and Blood of Christ.  (You can read more about the Eucharist in a series I wrote a few years ago: Read Part 1, Part 2, Part 3 and Part 4.) 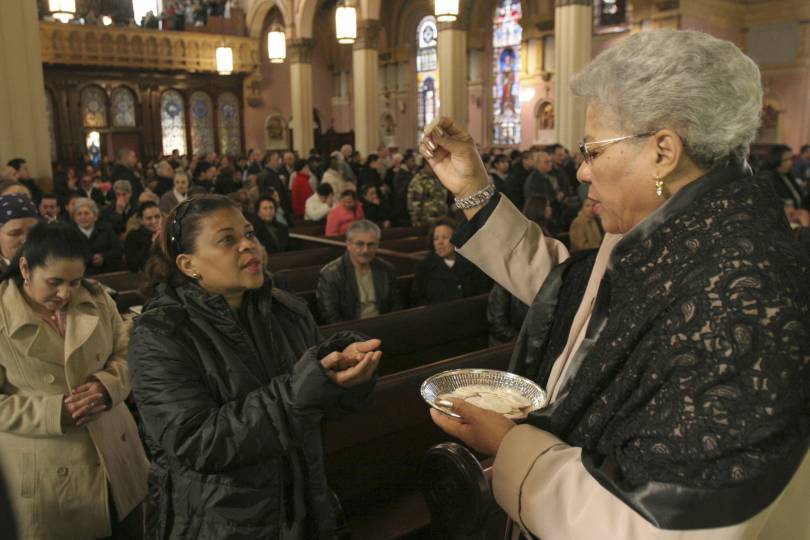 CNS photo/Gregory A. Shemitz
Last week we ended by saying that the Priest prepares himself for Communion by a brief quiet prayer. We should do the same. Then the Priest shows us the Eucharistic bread and invites us to the banquet of Christ. We humbly accept using the words of the centurion in Matthew’s gospel: Lord I am not worthy… (Matthew 8:8). The General Instruction of the Roman Missal encourages Communion under both species, that is, both bread and wine (GIRM 14, 281-287). It also mandates that we should receive bread that has been consecrated at the Mass where we are, rather than pre-consecrated bread from the tabernacle, so that Communion may stand out more clearly as a participation in the sacrifice actually being celebrated (GIRM 85). The Communion Rite is a moment of joy. Our participation is at its greatest throughout this rite: We sing our way to the table. Bowing, we say our “Amen” and eat the Body of the Lord. We say our “Amen” again and drink his sacred Blood. We sing our way back to our place, and we keep singing until all have shared in the feast. Then we all share in the silent communal prayer that follows. Communion is to be received in the hand or on the tongue. It is not permissible for the faithful to take the Bread or the Chalice by themselves (they should receive it), nor can they pass it from one to another among themselves. In most places, Communion is received while standing, although anyone may choose to receive it while kneeling (GIRM 160). When receiving Communion, we should make a simple bow of the head and respond “Amen” when the Priest, deacon, or minister presents the Host or Chalice and says, “the Body…” or “the Blood of Christ.” As soon as you receive the Host in your hand, you must consume the whole of it (GIRM 161). 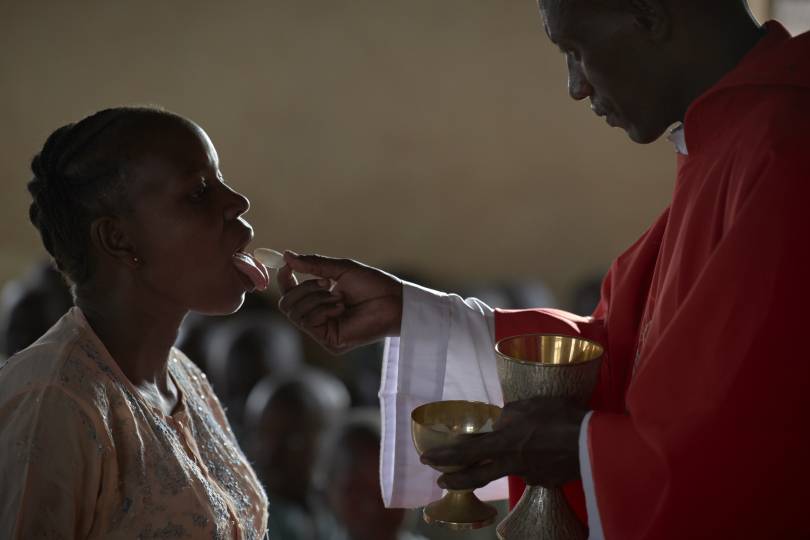 The General Instruction teaches that our song throughout the Communion procession expresses our unity of spirit by the unity of our voices. It gives evidence of our joy. And our singing makes the procession to Communion truly an act of community rather than a line-up of private individuals (GIRM 86). This is why liturgical musicians must make every effort to ensure that everyone can sing during the procession. The GIRM insists that our singing begin while the Priest is taking Communion. This has caused minor complications for musicians and singers who are used to receiving Communion before beginning the communion song (GIRM 86). This apparent problem is easily solved if the musicians approach Communion by taking turns. We do this in my parish, and it works quite well. In many places where there is only one solo music minister, the congregation has learned to carry on the song while their music minister receives near the end of the procession. It’s not ideal, but it can work. In our parish sometimes, I will hang around after the Communion procession is done, and when Father is purifying and the song has ended, I will bring Communion to our music minister. There is no prescription that music has to continue during purification. In fact, once everyone has received Communion, a significant period of silent prayer should begin. The GIRM also permits a second hymn after Communion. However, this must be sung by all and is not to be used as a “reflection” song while people pray silently (GIRM 88). If there is no hymn, the Communion antiphon may be recited by the Priest, a reader, or by the whole congregation together. If by a Priest, it takes place after he has received Communion but before he distributes Communion. 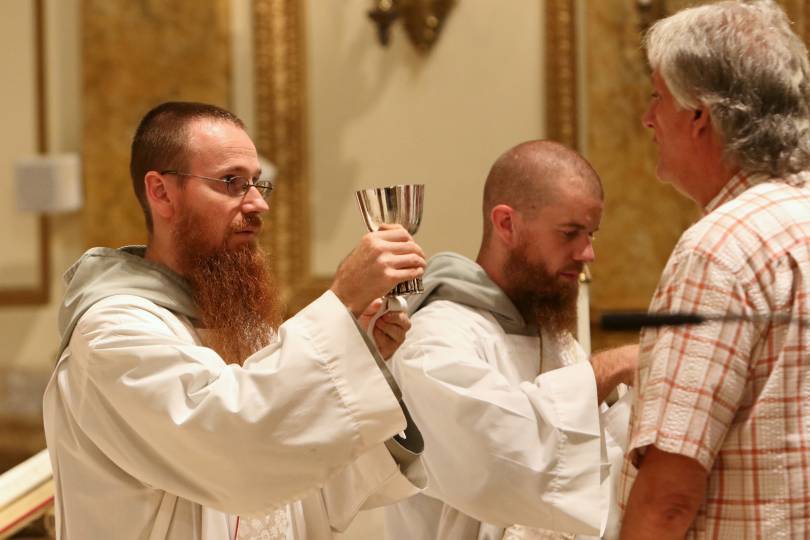 What has passed our lips as food, O Lord, may we possess in purity of heart, that what has been given to us in time may be our healing for eternity.

I once heard a story about a non-Catholic going to a Mass and after Communion seeing the priest purifying the vessels on the altar. She thought, “He’s doing the dishes in front of the guests!” But not in shock. This was actually the moment when her conversion began. There is also another story that says that in the times of Jesus, it was the cultural norm that when someone left the table and they planned to return, they would fold their napkin. This would indicate to the servants not to take their plates. If the napkin was not folded, the servants could remove the left-over food and plates. This explains what it would have meant to Peter and John when they entered the empty tomb and they saw the face cloth neatly folded (John 20:7. Some translations say, “rolled up”). Whether this is a real story or not, I always think about this when I fold the Corporal and Purificators in such a neat way after Communion: He is coming back!

As is usual with silent prayer during the liturgy, the Priest summarizes our communal silent prayer with a spoken prayer. This prayer is read from the Missal and is suited to the day. It usually is asking that our sharing in these sacred mysteries might bear fruit in our daily lives and in the life of the world. This prayer concludes the Communion Rite. Community announcements should be made after the Prayer After Communion and before the final blessing. Come back next week as we move into the Concluding Rites. [Most of the information used in these blog posts, comes from the text of a video made by Salt + Light Television in partnership with the National Liturgy Office of the Canadian Conference of Catholic Bishops in 2011, to help explain the latest changes to the language of the English Roman Missal, titled, THE CELEBRATION OF EUCHARIST for the Twenty-First Century. The project was headed by Fr. Bill Burke and text of that video was written by Canadian liturgist Margaret Bick, both of whom I owe a great deal of thanks for the vast knowledge they shared with us.]