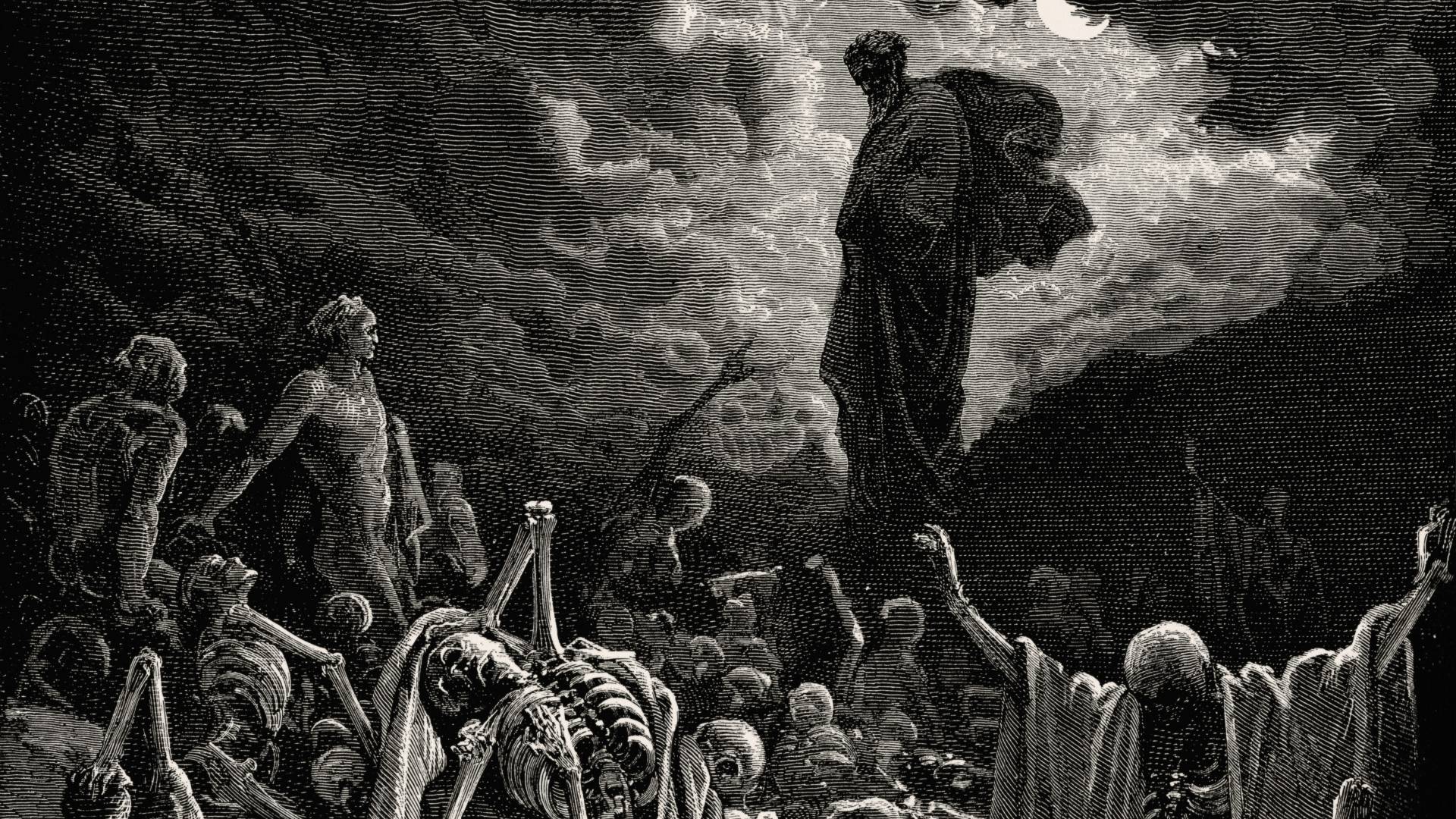 Detail of The Vision of the Valley of Dry Bones by Gustave Doré (Source: Wikimedia Commons)
Last time, we learned a bit about the first two of the four Major Prophets from the Old Testament: Isaiah and Jeremiah. They are called “major” because their books are much longer and profound that the twelve “minor” prophets, which we learned about a month ago. Isaiah wrote around the 8th century BC and Jeremiah in the 6th century BC. Ezekiel and Daniel are both a little later but also in the 6th century before Christ. Both are writing to the Jewish exiles in Babylon, and both books are full of supernatural content.   Ezekiel Ezekiel’s name means “God strengthens”. He was both a priest and a prophet. He begins his prophecies in Babylon, where he was exiled before the destruction of the Temple in 587 BC. His message of the coming judgment for those remaining in Jerusalem was ignored largely by those in captivity, but after the destruction of Jerusalem, the people began listening. After, Ezekiel’s message changed to one of comfort and hope for the future. Ezekiel sees himself as a shepherd and watchman. As a shepherd, he has to take care for the people, but as a watchman, he has to warn them of the dangers that may come. Ezekiel is known for his visions of angels: four-winged, four-faced creatures (1:10-11 and 10:14) and also his vision of wheels covered with eyes (1:18). He is also known for the very cinematic passage about the bones that come back to life (37:1-14).

Another passage from Ezekiel that you may be familiar with is from chapter 3:

"And he said to me, 'Son of man, eat what is before you, eat this scroll; then go and speak to the people of Israel.' So I opened my mouth, and he gave me the scroll to eat." (Ezekiel 3:1-2)

Other verses from Ezekiel that may stand out are: "I will gather you from the nations and bring you back from the countries where you have been scattered, and I will give you back the land of Israel again." (Ezekiel 11:17) "All the trees of the forest will know that I the LORD bring down the tall tree and make the low tree grow tall. I dry up the green tree and make the dry tree flourish. I the LORD have spoken, and I will do it." (Ezekiel 17:24) "I will give you a new heart and put a new spirit in you; I will remove from you your heart of stone and give you a heart of flesh." (Ezekiel 36:26)   Daniel Yes, this is the same Daniel who was in the lions' den. His name means “God is my judge”. He was taken into captivity in Babylon as a young boy, where he was among the Jewish young men chosen to receive a special education and rose to a position of importance with the Babylonians and then with the Persians. Daniel writes about the events that were taking place during his day but also about the future. The main theme for Daniel is God’s sovereignty and the importance of trusting in Him. Many passages and stories from Daniel are well known, including his experience in the den of lions (Daniel 6), the three young men who were thrown into Nebuchadnezzar’s furnace (Daniel 3), and the handwriting on the wall story (Daniel 5). Daniel was an interpreter of dreams, which is how he rose to prominence. In chapter 2, King Nebuchadnezzar has a horrible dream about a statue with a head of gold, arms of silver, and a belly made of brass. The legs were iron and the feet part iron, part clay. None of the Babylonian magicians could interpret the dream, but Daniel does. He explains that each part of the statue represents a new kingdom that will come. After this explanation, the king makes Daniel and his three companions (whom he would later throw in the furnace) his administrators. In chapter 4, Daniel interprets another of Nebuchadnezzar’s dreams, this one about a tree. This dream came true when the king lost his mind and was driven away from the people. The writing on the wall passage happens with Nebuchadnezzar’s son, now king, Belshazzar. The writing of the mysterious disembodied hand that appears while he is drinking out of (and defiling) the sacred Temple vessels is interpreted by Daniel. This prediction also marks the downfall of Belshazzar, who dies that very night. It was the following king, Darius of the Medes, who threw Daniel in the lions' den. Darius was followed by King Cyrus, who eventually allowed the Jewish exiles to return to Jerusalem. Daniel is also known for his dream in chapter 7. His dream is very similar to that of Nebuchadnezzar’s in chapter 2. The beast that he dreams of is very similar to the beast of Revelation 13. Again, this beast and each of its horns represent a different kingdom. The rest of the book describes other dreams and visions that Daniel had, including one describing the end of times when “Michael, the great prince who protects your people, will arise” (12:1). Chapter 13 of Daniel is one of the “deuterocanonical” (apocryphal) books not found in the Hebrew texts of Daniel. They are included in Catholic Bibles because they are found in the Greek Septuagint, which was the Greek translation of the Scriptures used by the Jewish community in Alexandria. (Additionally, the Prayer of Azariah, from Daniel 3:24-90, as well as the section in Chapter 12 about Bel and the Dragon, are also considered additions to Daniel). Chapter 13 tells the story of Susanna and the Elders. It is one of the earliest examples (if not the earliest) of how careful cross-examination can lead to the exoneration of a victim wrongfully accused. Some quotes from Daniel that you would recognize: "As I looked, thrones were set in place, and the Ancient of Days took his seat. His clothing was as white as snow; the hair of his head was white like wool. His throne was flaming with fire, and its wheels were all ablaze." (Daniel 7:9) "As soon as you hear the sound of the horn, flute, zither, lyre, harp, pipe and all kinds of music, you must fall down and worship the image of gold that King Nebuchadnezzar has set up." (Daniel 3:5) "Bless the Lord, all you works of the Lord; praise and exalt him above all forever." (Daniel 3:35) "This is the inscription that was written: MENE, MENE, TEKEL, PARSIN." (Daniel 5:25) "My God sent his angel, and he shut the mouths of the lions. They have not hurt me, because I was found innocent in his sight. Nor have I ever done any wrong before you, Your Majesty." (Daniel 6:22) "In my vision at night I looked, and there before me was one like a son of man, coming with the clouds of heaven. He approached the Ancient of Days and was led into his presence." (Daniel 7:13)   Prophets always show us two ways of living: the way that leads to suffering and the way that leads to salvation. There is no need to be afraid when we read them. Just heed their message: God is the Lord of all; He is sovereign; He is our salvation, and we need to place our full trust in Him.