Deacon-structing the Anointing of the Sick | Part 3 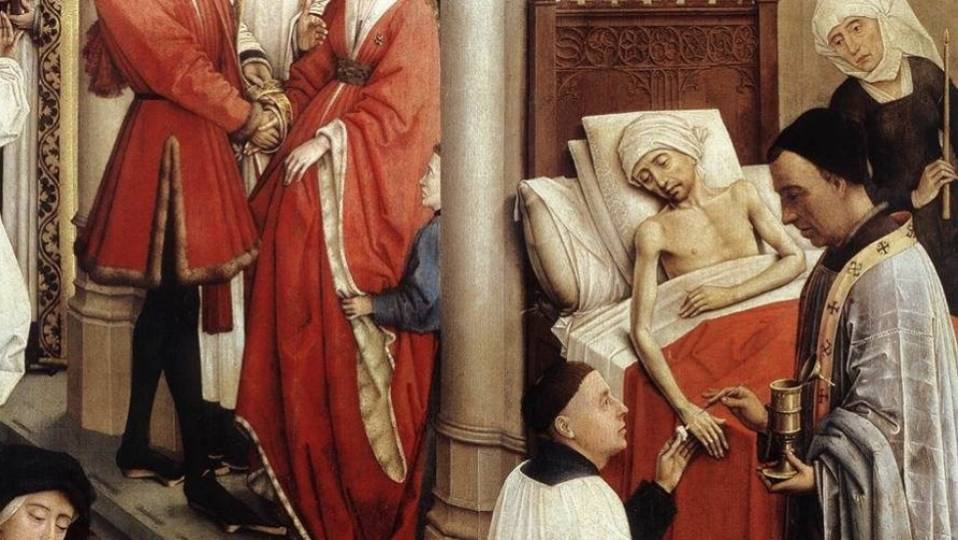 It is very common that at the time of death or extreme illness, it is often a deacon who is at the bedside. Deacons, after all, are the ministers to the peripheries, and so we are the ones commonly doing hospital and nursing home visits. As such, deacons do many of the "last rites" that I explained in last week's post: prayers, blessings, and offering the Eucharist or Viaticum. But this doesn't mean that deacons can administer the Sacrament of Anointing of the Sick. This debate has been going on for as long as I can remember (way before I entered diaconal formation): Whether deacons should be included as ministers of this Sacrament. The reason that is given for limiting it to bishops and priests is that very often this Sacrament is accompanied by the Sacrament of Reconciliation. It is also very commonly accompanied by the reception of the Eucharist. The Catechism of the Catholic Church says that when the Church offers the Eucharist to someone who is about to die, we call it Viaticum, literally “food for the journey”. The Catechism says:

Communion in the body and blood of Christ, received at this moment of "passing over" to the Father, has a particular significance and importance. It is the seed of eternal life and the power of resurrection, according to the words of the Lord: "He who eats my flesh and drinks my blood has eternal life, and I will raise him up at the last day." The sacrament of Christ once dead and now risen, the Eucharist is here the sacrament of passing over from death to life, from this world to the Father. (CCC#1524)

You may also remember  that each Sacrament confers several Graces. In anointing of the sick we receive the grace of: Remember also that Jesus has promised to be with us in the Sacraments? (That’s why we can say that He instituted them. Read Deacon-structing the Sacraments Part 2  to refresh your memory.)

In Anointing, Jesus is present as Jesus the healer.

And even though people don’t always get physically healed, when Jesus healed people He always called them to conversion and repentance. So can our sickness be an opportunity for conversion? That’s certainly one of the ways Jesus can make your sickness “new”. In my experience this is something that I have seen over and over again. When a family member is sick, more often than not, the experience fosters more patience, more compassion, trust, hope, prayer, faith, and more love. Ultimately, what we have to remember is that all Sacraments fill us with God’s life, and all sacraments satisfy some deep human longing. (See Deacon-structing Sacraments Part 3.)  Because all the longings of the human person are satisfied by God.

Anointing of the Sick satisfies the longing that we all have for healing, for comfort, and for peace.

I read once that Anointing reinterprets the meaning of sickness for those who are suffering and makes death alive with possibilities. I like that very much. In this day and age, we badly need to reinterpret the meaning of sickness and suffering. I can think of Sr. Nuala Kenny's latest book, Re-Discovering the Art of Dying, which I recommend to all readers of this blog.  I spoke to Sr. Nuala for the December 8, 2018 edition of the SLHour. It's a good interview worth listening to: I also like “death alive with possibilities”. We all need help preparing for death, as my sister always says, “our most important journey”. Just as Baptism, Eucharist, and Confirmation initiate us into the faith, Repentance, Anointing, and Eucharist prepare us for the life to come. They are the Sacraments that help us complete our journey on earth.