Deacon-structing the Anointing of the Sick | Part 1 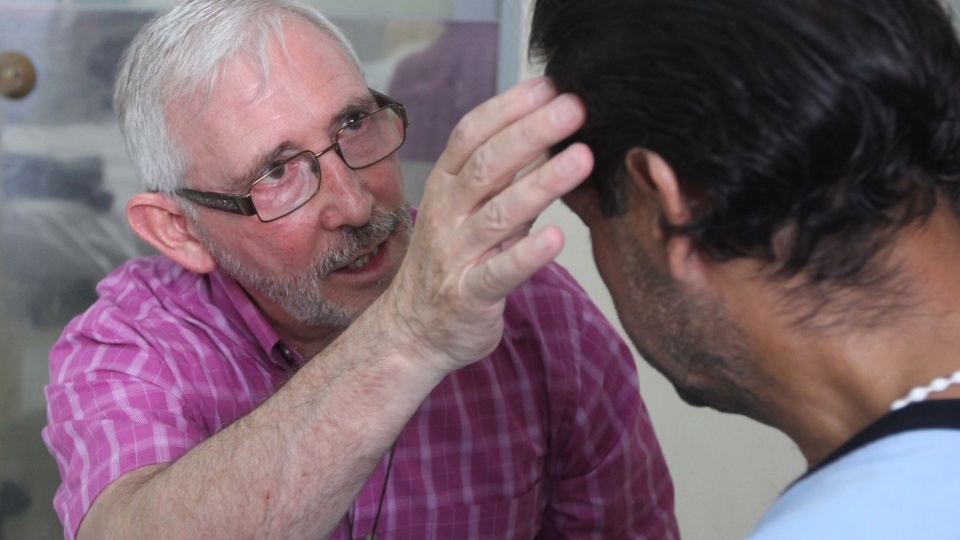 Maryknoll Father Joe Fedora administers the sacrament of the sick to a man with HIV in Peru's Dos de Mayo Hospital in February 2014 (CNS/Barbara Fraser)
Recently, a friend who teaches catechism to young children told me that one of her students had asked why God had created bacteria and viruses. That’s a very good question. Why would God create disease? I especially ask myself that question when I hear of a child who is suffering from a terminal or chronic illness. As Christians we try to make the best of it. We know that God can make all things new. We know that this life is not all there is and that there is a promise of eternal life. Still, I don’t know how I would be if my six-year-old daughter had a brain tumour. We are told to pray for God’s will.

Still, I would pray for healing.

We don’t completely understand why there is sickness and suffering in the world. But we do believe in a God that suffers with us, and we do believe in a Church that has taken up Christ’s command to go and heal. The Catechism of the Catholic Church begins the chapter on the Sacrament of the Anointing of the Sick with these words:

"By the sacred anointing of the sick and the prayer of the priests, the whole Church commends those who are ill to the suffering and glorified Lord, that he may raise them up and save them and indeed the Church exhorts them to contribute to the good of the People of God by freely uniting themselves to the Passion and death of Christ.” (CCC#1499)

This is almost word-for-word from section 11 of Lumen Gentium, the Church’s Dogmatic Constitution. Then follows a whole section of the Catechism (#1506-1513) which explains why and how the Church responds to the charge of healing the sick. That section ends with the following paragraph:

When Jesus sent the twelve apostles out two by two to proclaim the Kingdom of God, he gave them power and authority over demons and to cure diseases. In his Gospel Mark says that the apostles “went out and proclaimed that all should repent. They cast out many demons, and anointed with oil many who were sick and cured them” (Mark 6:12-13). The Letter of James reminds us what to do with those who are sick. He writes:

“Are any among you sick? Let them call for the elders of the church, and have them pray over them, anointing them with oil in the name of the Lord; and the prayer of faith will save the sick, and the Lord will raise them up; and anyone who has committed sins, will be forgiven." (James 5:14-15)

The Church has been anointing the sick with oil for a long time.

In a previous post about the Sacraments, I wrote that each Sacrament points to a mystery. I also called that mystery the “metaphysical occurrence” that takes place. (A metaphysical change would be a change to the substance or being of something.) This takes place with all the Sacraments: the bread and wine become the body and blood; the husband and wife become one flesh; your sins are forgiven, clean slate; you are cleansed of original sin… The Metaphysical Occurrence or Mystery that take place with the Sacrament of Anointing of the Sick is that the person is healed and their sins are forgiven. But that doesn’t necessarily mean that people are healed physically. People are strengthened and receive peace and courage to overcome the difficulties of their illness. They also receive the strength to deal with the temptation to despair in the face of death or suffering.

So there is healing: healing of the soul.

Come back next week and we’ll look at the actual ritual of the Sacrament.