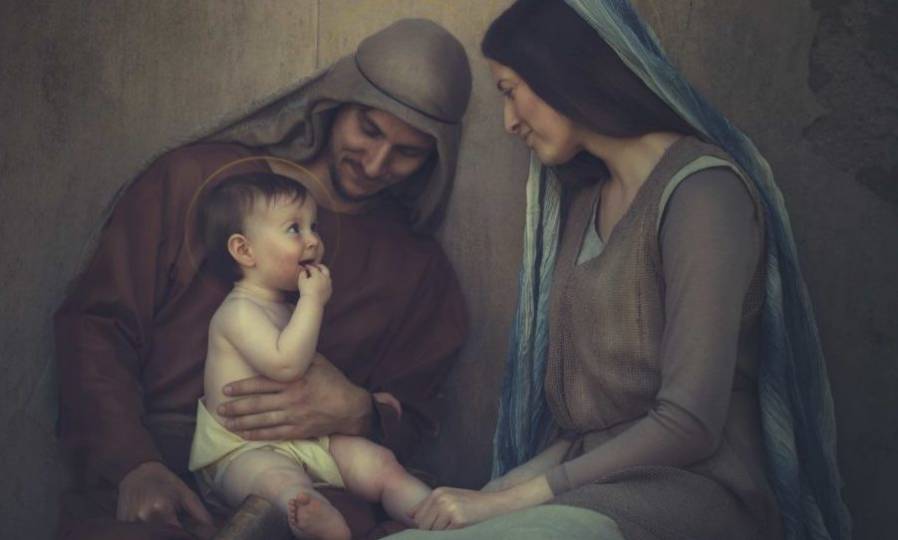 Image: Photo from The Saints Project, by Kristyn Brown.

Sometimes, because it’s Lent we may overlook some feasts or solemnities that fall during the season. It’s hard to ignore the Feast of St. Patrick, but how many really pay attention to the Solemnity of St. Joseph?
There isn't much that we know about Joseph. We know that his Father’s name was Jacob and that he was the husband of Mary. We know that before they lived together he found out she was pregnant and instead of shaming her or causing scandal, he decided to divorce her quietly. Matthew’s Gospel tells us that he was an upright man, a man of principle. We also know that he was a righteous man who followed the law: He observed religious law – we know he went to Jerusalem for the Jewish festivals. He also followed civil law – he went to Bethlehem for the census. We also know that Joseph had dreams. God spoke to him in his dreams and he followed his dreams.
One thing we don’t know about Joseph are his words. In all of the Gospels, no where do we ever read anything Joseph says. He never says anything. But he’s a man of action: He does what the angel tells him; he takes Mary as his wife; he goes to Bethlehem; he finds a place to stay for the night; he takes his family to Egypt. He’s a man of action – not a man of words.
For centuries, scholars and artists have tried to figure out Joseph’s words. One of my favourite Christmas songs is Joseph’s Song by Michael Card. In it, Joseph prays:

“How can it be, this baby in my arms, sleeping now, so peacefully. The son of God, the angel said, how could it be? O Lord I know he’s not my own, not of my flesh, not of my bone. Still Father let this baby be the son of my love.”

I like this song because to me it shows what Joseph models perfectly: He was a man after God’s will. He longed to know God’s will and searched to see how he fit into the Father’s plan.
And just like God had a plan for Joseph, God has a plan for each one of us. The plan does not need to be more than that He wants us to be upright and righteous. He wants us to be loving parents, loving husbands and wives. God wants us to follow the law: observe the commandments. But, just like Joseph in the song, we may feel that we don’t have anything to contribute, that we are nothing but simple carpenters. Just like Joseph we may never see the fruit of our work. We may never reap the harvest. The first reading on the Solemnity of St. Joseph, March 19 (this year it got moved to tomorrow, March 20th because the 19th is the third Sunday of Lent), is from the Book of Samuel (2 Samuel 7:4-5, 12-14, 16). In it, we hear about a promise to King David. We hear about it in Psalm 89 as well: “The son of David will live forever” or “his line will continue forever.” In the second reading for the same feast day (Romans 4:13, 16-18, 22) Paul tells the Romans about another upright man who never saw the fruit of his work: Abraham. He did God’s will, but never saw the fulfillment of God’s promise to him.
But the promise was fulfilled. St. Joseph may have been a simple carpenter who did not amount to much during his life, but today, 2000 years later, he is venerated as one of the greatest saints in the Church. Every March 19th we celebrate the Solemnity of St. Joseph, Husband of Mary. There aren't a lot of Saints for whom we have solemnities. The Church has been observing this feast since the 10th century and it has been a universal feast since the 16th century. And Joseph gets another feast day on May 1st: Feast of St. Joseph, the Worker. Except for Mary, no other saint has more than one feast day.
St. Joseph is the patron saint of husbands, of fathers, the patron saint of families, the patron saint of homes and the patron saint of workers. Joseph is also the unofficial patron saint against doubt and hesitation, of fighting against communism and of a good and happy death. We also believe that Joseph prays for all pregnant women, for immigrants, travelers and for those buying or selling a house.
In 1870, Pope Pius IX declared St. Joseph patron of the universal Church. He is the Patron of the Universal Church! And for us in our country, we should know that St. Joseph is the principal patron of Canada. That’s a huge responsibility for a man of so few words. But it’s a perfect job for a man of action.
As we journey through Lent – especially when we gather around the Eucharistic table, let’s pray to St. Joseph. Let him guide us and help us open our hearts to God’s plan for us: that we may be upright and righteous; that we may be men and women after God’s will; that we may be able to pray, “Father show me how I fit into this plan of yours.”
And dream. Let God speak to you in your dreams and then get up and do as the angel of the Lord directs you. God has a great plan for everyone. Even for a simple carpenter. - Image: Photo from The Saints Project, by Kristyn Brown.