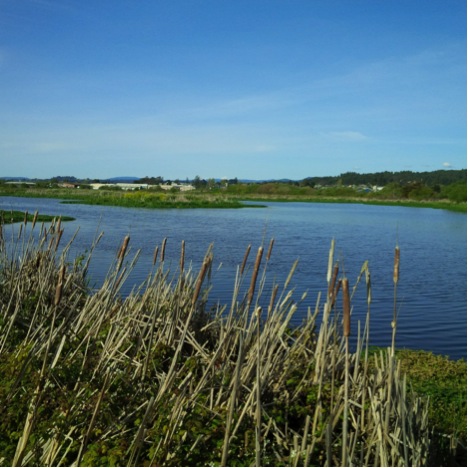 A few weeks ago I wrote about Waste Management and shared an important piece of information: In nature, there is no waste. We must remember this as we go about making choices that impact the waste we produce. When we think of waste, we think of garbage, that is, what goes to landfill and what goes to compost or recycling. But do you ever think about all the waste that gets flushed down the drain?
Every day each of us generates about 90 gallons (340 litres)  of waste-water. We use the largest amount, about 50 gallons (190 litres) to wash and clean clothes, dishes, ourselves and our homes. Flushing the toilet uses about another 25-30 gallons (about 100 litres) of water daily. Cooking and drinking water require another 2 – 10 gallons (between 8 and 39 litres) daily.
Recently, while working on production for our upcoming six-part series on the environment, Creation, we were in Northern California at the Arcata Waste Water Treatment Plant and Wildlife Sanctuary, where the city of Arcata operates an innovative sewer management system. It’s a very simple process: A series of oxidation ponds, treatment wetlands and enhancement marshes are used to filter sewage water. Did I say that in nature there is no waste? But this Water Treatment Plant in Arcata is also a wildlife sanctuary. Despite being effectively a sewer, the series of open-air lakes do not smell, and are a popular destination for birdwatching, cycling and jogging.
Before the waste water can enter the oxidation ponds, all solid waste, debris and other gritty materials have to be removed (more on this later). All solid waste is decomposed by bacteria. This happens in what are called “digesters”. They are “anaerobic digesters” because the bacteria decompose or digest the sludge without using oxygen. The bacteria in the digesters convert some of the ingredients in the sludge into methane gas, which can be harnessed as energy. Essentially this whole “digesting” process is composting. The solids (or sludge) are dried and mixed with lawn and brush clippings. This mixture is composted and used all over Arcata and in the Arcata Marsh and Wildlife Sanctuary.
The water that remains after all the solids are removed are then sent into oxidation ponds or lakes. In these ponds, other bacteria and microorganisms break down or digest any remaining waste in the sewage. Algae in the ponds provide oxygen for the bacteria. Once algae and bacteria die, they also become pollutants so they too have to be removed before the water goes out into the ocean.
The water then moves from the oxidation ponds into the treatment marshes where the bulrush and cattails shade the water so algae can’t grow. These plants slow the flow of the waste-water allowing suspended pollutants to sink to the bottom of the marsh. These plants also provide habitat for bacteria, fungi and other microorganisms that feed on and further breakdown pollutants in the waste-water.
Then the water moves on to the enhancement marshes where the waste-water is treated again by removing more suspended matter and other pollutants. The enhancement marshes also provide habitat for wildlife and beautiful scenery for visitors.
Just before the now-treated water is allowed to go out into the ocean, local law requires that it is treated with chlorine in order to kill pathogens, harmful bacteria and viruses. Sulfur Dioxide is used to remove the chlorine before the water goes out into Humbolt Bay – although we were told by David Couch who’s been working in waste water treatment in Arcata for many years, that the chlorine is not really necessary – that the marshes are able to do all the necessary cleaning.
As David Couch took us through the whole process I kept thinking what Jack Macy at SF Environment had told us; that there is no waste in nature. This is what God intended. I was reminded of what Rabbi Aaron Flanzraich told me once when explaining Hannukkah: “God is the only one who has the capacity to begin; but he has given us the capacity to begin again.” God intends for new life to begin again, and again, and again. Nature does this by design. We can treat all waste in water naturally and return to nature the water that we use. This is what God intended.

However, there are some items that cannot not be removed naturally. We have to be more mindful that these items do not end up in the water. Consider this: According to the U.S National Park Service, if you throw out a piece of paper towel out at sea, it will last about 2-4 weeks. An orange or banana peel will last 2-5 weeks. A newspaper, 6 weeks. A waxed milk carton, 3 months. Other items:
And if we remember what we were told at the Clearwater Marine Aquarium, this is not mentioning the damage that any of these items can cause when ingested by wildlife.
As we learn more and more about what the Church teaches about ecology we must remember that water is a universal right to all human beings (Benedict XVI, Caritas in Veritate 27) and that we must care for all of Creation.
In the words of Pope Francis from his May 21, 2014 General Audience:

Creation is not a property, which we can rule over at will; or, even less, is the property of only a few: Creation is a gift, it is a wonderful gift that God has given us, so that we care for it and we use it for the benefit of all, always with great respect and gratitude.

And in his Urbi et Orbi message for Easter, 2013, Pope Francis said:

…let us become agents of [God’s] mercy, channels through which God can water the earth, protect all creation and make justice and peace flourish.
Peace to the whole world, torn apart by violence linked to drug trafficking and by the iniquitous exploitation of natural resources! Peace to this our Earth! May the risen Jesus bring comfort to the victims of natural disasters and make us responsible guardians of creation.

Indeed, let us all become responsible guardians of creation. Let’s begin by thinking about the water that we consume and that all creation needs for survival.
- To learn more about what the Catholic Church says about the environment and water issues, stay tuned for our new six-part series Creation, coming to you at the end of 2015 and to learn more about the Arcata Marsh, visit the Friends of the Arcata Marsh.