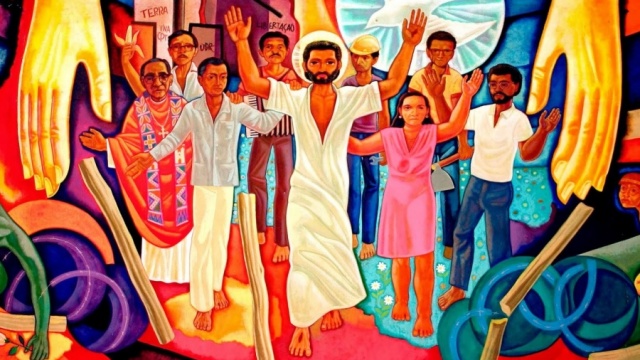 Last week
, writing about Mary in the Americas, made me think of how this idea of liberation (or freedom) has a particular meaning for those living in the Americas, probably dating as far back as when Christopher Columbus first arrived in 1492. It definitely took a particular meaning during the late 70s and 80s. That's when Liberation Theology became most controversial. Now with Pope Francis, some say that there is new acceptance of this particular theology. A bit over a year ago, as Pope Francis was arriving for a huge outdoor Mass in Santa Cruz, Bolivia, people were chanting, "¡El papa de los pobres!" (“The pope of the poor”). I was reminded of his meeting in March 2013 with members of the press when he exclaimed, “How I would love a poor Church and a Church for the poor!” It is this emphasis on the poor that has rekindled the discussion about Liberation Theology in the Catholic Church. Liberation Theology developed in Latin America in the 1950’s as a grassroots response to widespread poverty caused by social injustice. Its name is derived from the title of a book by Peruvian Dominican priest Gustavo Guitérrez. Most Latin American governments at the time were autocratic or violent military dictatorships. The continent was immersed in poverty. Attempting to respond, the bishops of Latin America gathered in Medellín, Colombia in 1968 and stood up for the rights of the poor. The bishops also insisted that the poor can teach us something about the Gospel, about faith, solidarity and community life. Liberation Theology became controversial when some theologians, borrowing ideas from Marxism, insisted that an “option for the poor” meant involvement in the political struggle of the poor against the wealthy. Some priests were even directly involved in the political struggle. Around the same time, the Second Vatican Council took a strong stand for freedom and equality. The Council also called the Church to “a preferential option for the poor.” It became clear in the minds and hearts of the world’s bishops that the message of Christianity is also very much a message of liberation. One of the Scriptural inspirations of the movement was the Exodus narrative in which Moses leads the people of Israel from slavery into freedom. Traditionally, this liberation was seen as symbolic of the freedom from sin that all of us hope for as we enter the “Promised Land” of Heaven. But through the lens of Liberation Theology the traditional interpretation took a back seat to the notion of liberation from temporal oppression and injustice. In the 1980’s the Vatican's Congregation for the Doctrine of the Faith, under Cardinal Joseph Ratzinger, who would become Pope Benedict XVI, issued two major documents on Liberation Theology. The documents praised the movement's concern for the poor and for justice, but condemned a tendency to mix Marxism—in particular the promotion of “class struggle”—with religious commitments to fight poverty and injustice. The Instruction on Certain Aspects of the Theology of Liberation, issued in 1984, cautioned that concepts uncritically borrowed from Marxism were “corrupting whatever was authentic in the generous initial commitment on behalf of the poor.” (VI:10) Moreover, the document warned against the temptation to emphasize unilaterally the liberation from temporal servitude over and above the liberation from sin. The document was critical of certain interpretations of Liberation Theology that misunderstood or eliminated essential aspects of Christianity: the two natures of Christ; the sovereignty of Grace; the absolute distinction between good and evil; the necessity for conversion and the true nature of the means of salvation, especially of the Church and the Sacraments. But the document did not outright condemn a theology of liberation properly understood. Ratzinger’s warnings were not to be interpreted as a disavowal of all those who seek a preferential option for the poor, nor should they serve as a “kind of approval, even indirect, of those who keep the poor in misery, who profit from that misery, who notice it while doing nothing about it, or who remain indifferent to it.” (XI:1) “More than ever,” Ratzinger wrote in the introduction, “the Church intends to condemn abuses, injustices, and attacks against freedom, wherever they occur and whoever commits them. She intends to struggle, by her own means, for the defense and advancement of the rights of mankind, especially of the poor.” Come back next week to learn what other Church leaders have spoken on the side of Liberation Theology. - Image: "Cristo de la Liberacion" (Christ of the Liberation) by Maximino Cerezo Barredo, who's been dubbed "liberation painter."