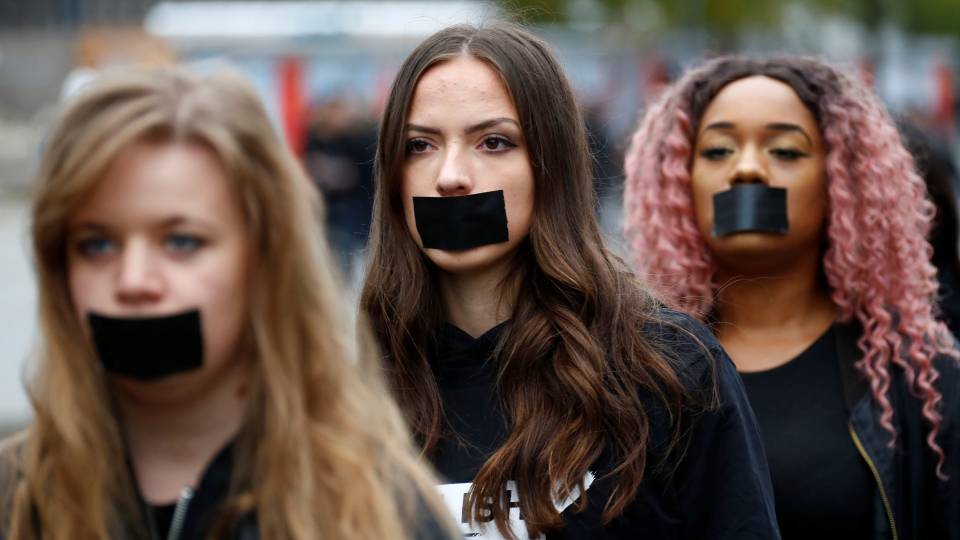 Activists in Berlin take part in a "Walk for Freedom" to protest human trafficking on Oct. 20, 2018. (CNS photo/Fabrizio Bensch, Reuters)
A few days ago, in a New York City courtroom, 23 women gathered to tell their accounts about alleged abuse by accused sex trafficker Jeffrey Epstein, who took his own life by suicide earlier this month. While many have been focusing on the #MeToo aspect of this case, I can’t help focusing on that phrase: “sex trafficking”. Mr. Epstein is not just accused of taking advantage of his position and power and sexually abusing women. He is accused of trafficking them for the purpose of providing sexual services to other men. According to thetraffickedhuman.org, human trafficking is a modern-day form of slavery. It is defined as “the recruiting, harbouring, and/or controlling of a person for the purpose of exploitation”. The website is run by the Anti-Human Trafficking Coalition, which includes fourteen groups - among them BC & Yukon Catholic Women's League, the Canadian Religious Conference, the Knights of Columbus of BC & Yukon, the Roman Catholic Archdiocese of Vancouver, and the U.S. Catholic Sisters Against Human Trafficking. Its goal is to eliminate the exploitation of women, youth, and girls.

In January of 2019, the Vatican released guidelines to help the Church fight human trafficking. These documents can be found in the resource section of the Migrants and Refugees Section of the Dicastery for Integral Human Development (DPIHD) website.  The  Dicastery also published Pastoral Orientation on Human Trafficking. This document quotes Pope Francis from an April 2014 address to Participants of the International Conference on Combating Human Trafficking, when he said, “Human trafficking is an open wound on the body of contemporary society, a scourge upon the body of Christ.” I hope I don’t need to say more to explain why this is a cause that should be at the forefront of our work as Christians.

But it isn’t. For most of us this issue is not very close to home. However, it’s closer than you think. According to thetraffickedhuman.org, the RCMP estimates that 600 to 800 people are trafficked into Canada every year, and another 1500 to 2200 persons are trafficked through Canada to the United States annually. Less than 10% of Canada’s trafficking cases involve people being brought into Canada; 90% involve domestic human trafficking. In Canada human trafficking is a $32 billion per year business with 79% of victims destined for the sex industry. Community organizations estimate that as many as 16,000 Canadians are trafficked annually. The average age of entry into prostitution in Canada is 13. The typical age range of females trafficked for sexual exploitation by organized crime networks in Canada is 12-25 years of age. The statistics are more shocking among our Indigenous communities. The average age for Indigenous girls to enter into prostitution is between 7 and 12. Across the country, Indigenous girls are grossly over-represented in prostitution and among the women who have been murdered in prostitution. While Asian girls are over-represented in indoor prostitution, Native girls are over-represented in street prostitution. Yet, while #MeToo hits close to home for so many of us, #MissingAndMurdered doesn’t.

Evelyn Vollet of chair of the Anti-Human Trafficking Committee of the Archdiocese of Vancouver gave us some background on the situation in Canada. You may remember that in 2013 the Supreme Court struck down the three laws surrounding prostitution [a. Keeping a bawdy-house or brothel (Sections 196, 210 of the Criminal Code); b. Communicating in public for the purpose of engaging in prostitution (Section 213); and c. Living off the avails of prostitution (Section 212).] In December 2014, Canada adopted the Protection of Communities and Exploited Persons Act (PCEPA). This law is based on the Swedish Model, which has been very successful in many countries and focuses on those who purchase these services. It penalizes the demand for commercial sex while decriminalizing individuals in prostitution and providing them with support services, including help for those who wish to exit prostitution. While the Swedish Model laws have made a huge difference in other countries, the new law in Canada has been minimally enforced. What’s more distressing is that the law is being reviewed by our current government with a view to possibly eliminating it. Evelyn Vollet says that Germany is a good example of how the legalization of prostitution has increased sex trafficking. Germany is known as the brothel of Europe. But Germany’s own women are not sacrificed or drawn into the industry; instead, approximately 90% of the women are trafficked from abroad, mainly from poor countries in Europe, like Bulgaria and Romania. Once the women are sold and used and no longer useful, they are discarded and sent back to their home countries. Every day, 1 million men pay for commercial sex in Germany, where prostitution has become a $17 billion a year industry. Legalizing prostitution will not give women more freedom; it will make it legal to victimize them. As we approach the Federal Election on October 21, 2019, it is critical that we educate ourselves about these issues. We need to be aware that the movement to legalize prostitution in Canada will only further marginalize our Indigenous women and youth, victimize all our women, as well as increase prostitution and human trafficking in our country. Maybe we comfort ourselves by telling ourselves we are not Jeffery Epstein. Maybe you are not part of the supply and demand chain. But maybe you can make a difference.

“Is not this the fast that I choose: to loose the bonds of injustice, to undo the thongs of the yoke, to let the oppressed go free, and to break every yoke?” Isaiah 58:6

Later this month, I will be hosting a panel discussion with several experts on this issue. My guests will be Sr. Nancy Brown, a Sister of Charity of Halifax, who serves on several Anti-Human Trafficking Committees, including the Working Group on Sexual Exploitation of the Canadian Council of Churches. She was also one of the 200 persons invited from around the world to attend an International Conference on Trafficking in Persons in April 2019 held by the DPIHD at the Vatican. With her will be a lawyer, Gwendoline Allison. Gwendoline is co-counsel to the Asian Women Coalition Ending Prostitution and was a witness before the House of Commons Standing Committee on Justice and Human Rights and the Senate Standing Committee on Legal and Constitutional Affairs regarding the Protection of Communities and Exploited Persons Act. She is one of the members of the Anti-Human Trafficking Committee of the Archdiocese of Vancouver. The third guest is Laura Lam, also a member of the Anti-Human Trafficking Committee formed out of the Archdiocese of Vancouver. She is currently completing her Masters in Immigration and Settlement Studies at Ryerson University in Toronto.

Tune in for Unbound: A Conversation Against Human Trafficking on September 18 at 8 pm ET / 5 pm PT.

Next week, the Holy Father will be in Madagascar as part of his six-day Apostolic Journey to Mozambique, Madagascar and Mauritius. So we will take a break from Deacon-strucing and return the following week.