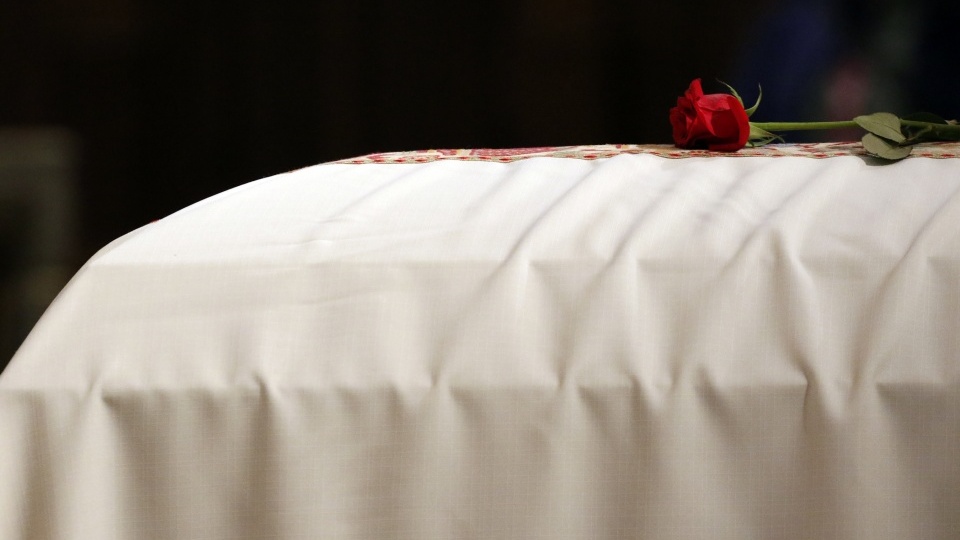 CNS photo/Gregory A. Shemitz
Over the last couple of weeks we were looking at the Sacrament of the Anointing of the Sick, and it allowed us to think about how the Church approaches death and dying. In the light of that conversation, I’d like to begin a conversation about Catholic funerals. As a deacon, I am able to preside over a Funeral Liturgy (outside of Mass). I have not, however, ever presided over one. I have, however, been the minister at Funeral Vigil Prayers. There are, though, many deacons who regularly preside over funerals. Part of the reason for this is because, often, the funeral of a faithful parishioner is organized by that person’s children (or family members) who are not practicing Catholics, and therefore the emphasis is not placed on having a Funeral Mass. Still, for many people, the minister who accompanied them while in hospital or long-term care is a deacon, so the family has developed a relationship with him. When it’s time to plan the funeral, often they reach out to the deacon. They feel that a Mass is too much (for them if they are not practicing), or they feel that some people who are invited to the funeral would be uncomfortable in a church and at Mass, so they opt for the “funeral home chapel funeral” outside of Mass, which can be presided over by a deacon. This is compounded by the fact that many funeral homes are either not Catholic or trying to be a “one-stop-shopping” provider, which does not encourage the funeral to be at the local parish.

In the next couple of weeks, I’d like to go over all of these points in more detail.

Today, I’d like to share with you a few funeral experiences that I’ve had recently (even though I have not presided, I have been the deacon at funerals or been in the congregation), which have inspired me for my own funeral. A few of these have been in Catholic churches. There is something beautiful about a Catholic funeral. It is a beautiful and meaningful liturgy (as all our liturgies are), but often, I feel that we have an idea that they have to be done a certain way.

Usually it’s sombre and (in all honesty) not very inspiring or beautiful.

Every single Catholic funeral that I’ve been to (as long as I can remember) has had fairly predictable music choices ("Be Not Afraid", "On Eagle’s Wings", "Amazing Grace", "Here I Am, Lord", "You Are Near", "I Am the Bread of Life", and then "Ave Maria" and "Panis Angelicus"), which are done by a cantor/organist.

I think that this is done because those planning the liturgies are not particularly interested in music – they are often not even practicing Catholics – so they go with whatever the organist has in their funeral repertoire. A few months ago, a former classmate of mine died after a long battle with cancer. His funeral was at an evangelical church. While the celebration lacked in ritual and beauty, the music was perfect. In some ways it was not really a funeral but a celebration of life. The body was not present, and the celebration was a combination of stories of his life, shared by various family members, and songs that had given him hope as he struggled through the disease. They sang, "Oceans" (Hillsong United) and "Way Maker" (Sinach) among others. I walked out of that celebration soaring, thinking how much God had been glorified during that last hour or so that we gathered together to celebrate my friend’s life. It was also a wonderful opportunity to evangelize all the people who came to honour my friend and mourn his loss (and there were a lot of people). Needless to say, every time I hear those songs, I think of my friend. On the way out they gave everyone a CD with all the songs. What a prayer card substitute to remember him by.

I decided that I wanted my funeral to be a liturgy that glorifies God.

Not that the music choices are what determines whether God is glorified or not, but, I have to say, it makes a difference. Here’s what I want for my funeral: There will be a visitation and Vigil Prayers. Absolutely. For the actual day, I will pick my favourite songs.  They don’t have to be “funeral” songs. Maybe a version of  Glorious' "Abba Pere" would be good. It’s OK if they are “resurrection” songs, but more importantly they will be songs of hope. (Isn’t every Christian song a song of hope?) They do have to be liturgically appropriate, but we can choose from more than the typical list of 10 songs. I will have our youth music group (the best musicians I know) as the music ministers. I will ask them to sing a few worship songs before we start, and the opening procession will be solemn yet beautiful – maybe something instrumental. I'll ask them to pull out all the stops for my funeral. No organ. The Mass will be a regular Funeral Liturgy. I will pick the readings, and they will be readings that, again, give hope. I doubt that they will be your typical “funeral” readings. I have considered using the same readings that we had for our Wedding Mass. The homily will be great. It will not be read. It will not be a recycled funeral homily. I won’t go as far as writing the homily, but I will make sure that before I die, I’ve asked the homilist to preach. Can't have a bad homily at my funeral. I want a simple casket: a simple wooden box. I like the idea of places that offer you the opportunity of making your own (although my wife thinks that is a bit too much). It will probably be one made in a monastery like this one at St. Barbara Orthodox Monastery in California.

The rest, I think, will fall into place.

The closing song will be uplifting and send people off with a sense of joy and hope. I don’t want anyone feeling sad at my funeral. In fact, I want everyone to be dressed in white. I want to be cremated, and I want the interment at the cemetery to be a private moment for my closest family and friends. After the Funeral Mass, I want everyone to go somewhere – it can be the parish hall or somewhere else – and I want them to celebrate each other and eat pub food. No one will be eating small tuna fish and egg sandwiches with carrot and celery sticks at my funeral. They will eat mozzarella sticks, chicken wings, chicken tenders, mini pizzas, nachos, sliders and potato skins. And brownies. Maybe Nanaimo Bars.

I would think that once I get to Heaven that will be the menu as well!

Food for thought. Come back next week and we’ll begin looking at Funerals and Funeral liturgies in more detail. Watch this video version of "Way Maker" by the Pentecostals of Alexandria to inspire you for your funeral: