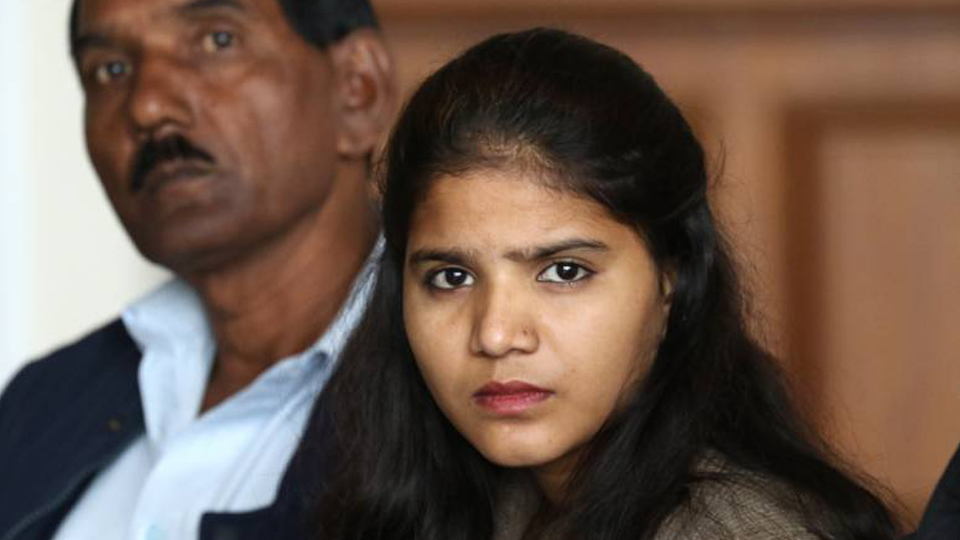 Asia Bibi received world-wide attention when Pakistan Minister and critic of the country's blasphemy laws, Shahbaz Bhatti, was assassinated in 2011. Bhatti had joined Salmaan Taseer, Governor of Punjab, in championing the case of Asia Bibi. Earlier that same year, Governor Taseer, had been assassinated by his own bodyguard. After the Supreme Court verdict two weeks ago, Bibi's own lawyer, Saif-ul-Mulook, had to flee Pakistan and has sought asylum in the Netherlands. Samson Salamat, the Christian chairman of the inter-religious Movement for Tolerance in Pakistan, issued a statement: "This is a highly tense and threatening situation for religious minorities, especially for Pakistani Christians, and there is fear of persecution of Christians and attacks on their churches and other properties," he said. He also called for a ban on "extremist groups who are involved in hate speech and use religion as a tool to promote violence in society." 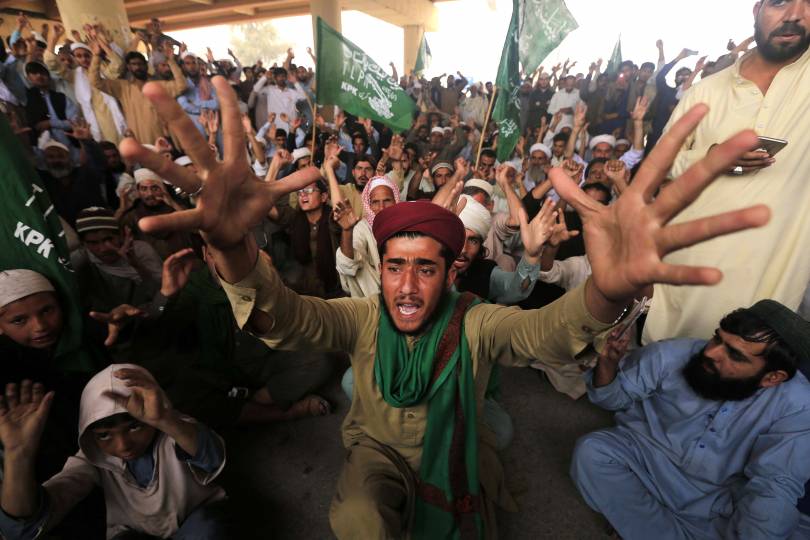 Among those who joined in demanding the release of Asia Bibi was Pope Benedict XVI. At a General Audience in November 2010, the Pontiff spoke of his "spiritual closeness" to Bibi. He said that Christians in Pakistan often faced violence or discrimination, and he called for Bibi's "full freedom". "I also pray for all those in similar situations, so that their human dignity and fundamental rights may be fully respected," Pope Benedict said. In April 2015, Pope Francis welcomed Bibi's husband, Ashiq Masih, and one of their daughters at the Vatican. Several months earlier, Bibi had sent Pope Francis a letter asking him to pray for her. 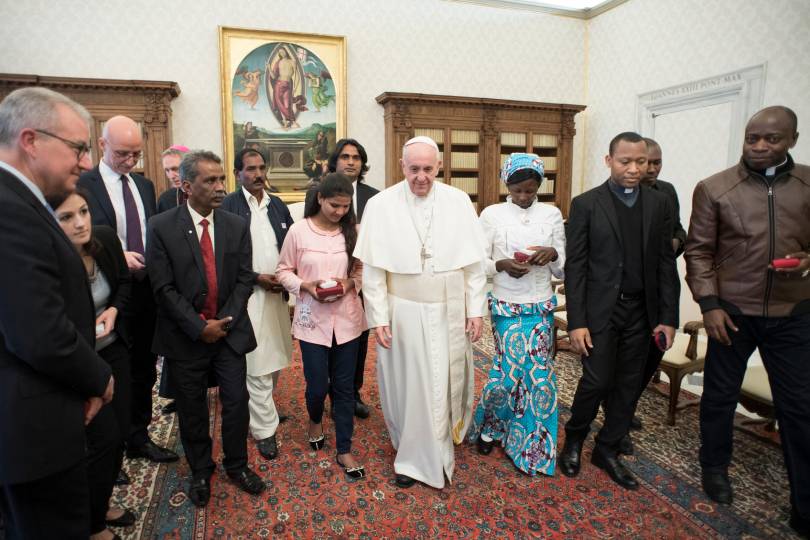 Pope Francis walks with family members of Asia Bibi, a Christian woman sentenced to death in Pakistan, during a private audience at the Vatican, Feb. 26, 2018. (CNS photo/Vatican Media)
In February 2018, Masih and daughter, Eisham, were again at the Vatican, this time for an event arranged by Aid to the Church in Need to commemorate those persecuted for their faith. As part of the celebration, the Colosseum in Rome was illuminated in red. At the same time, the Maronite Cathedral of St. Elias in Aleppo, Syria, and the Church of St. Paul in Mosul in Iraq will also be bathed in red light. Rebecca Bitrus, a young Nigerian Christian woman, was also present at the meeting with the pope. She had fled from Boko Haram terrorists after two years of captivity. Pope Francis described Bibi and Bitrus as "women martyrs: marvellous examples for a civilization that is so afraid of pain". At that meeting, the Holy Father entrusted the group with a rosary for Bibi and asked them to let her know that he is praying for her. Aid to the Church in Need was able to deliver the rosary to Asia Bibi, and she was allowed to keep it with her in her cell. “I received the pope’s gift with devotion and gratitude,” she reportedly said. She added that the rosary offers her great consolation while knowing that Pope Francis is praying for her.

The prayers have paid off, as Asia Bibi is now free. There were reports that she had been taken out of Pakistan, but those claims were dismissed by officials who now say that she is in a secure, although undisclosed, location inside of Pakistan. There were rumours that Spain and France had offered her asylum and, reportedly, Italy has said it would try to help Bibi. According to the CBC, Liberal MP Andrew Leslie confirmed earlier this week that Canada has also been in talks over how to best protect Bibi. 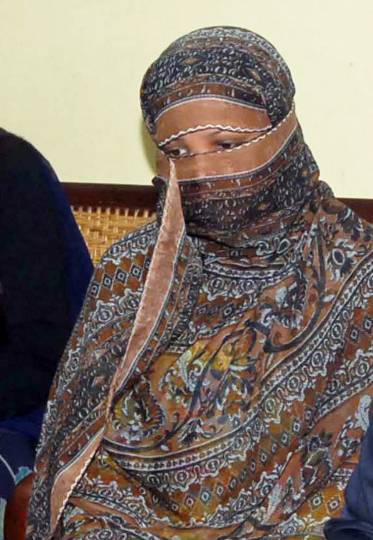 Asia Bibi, the first Catholic woman to be condemned to death under Pakistan's blasphemy laws will discover her fate later this month, her family told Catholic News Service. She is pictured in a 2010 photo. (CNS photo/Punjab Governor House handout via EPA)
It is a joyful day for Asia Bibi, but today, as we commemorate 100 years of Armistice, the end of the "war to end all wars" and we pray for peace, let’s continue to pray for her, her family, and for persecuted Christians everywhere. So many have died in defense of our right to belief and worship. Let’s continue to pray and work towards a world where there is no more war, no more persecution, intolerance, and no more hatred. Video by British Catholic band, Ooberfuse Ooberfuse - Free Asia Bibi (Official Music Video) from The second door on Vimeo.