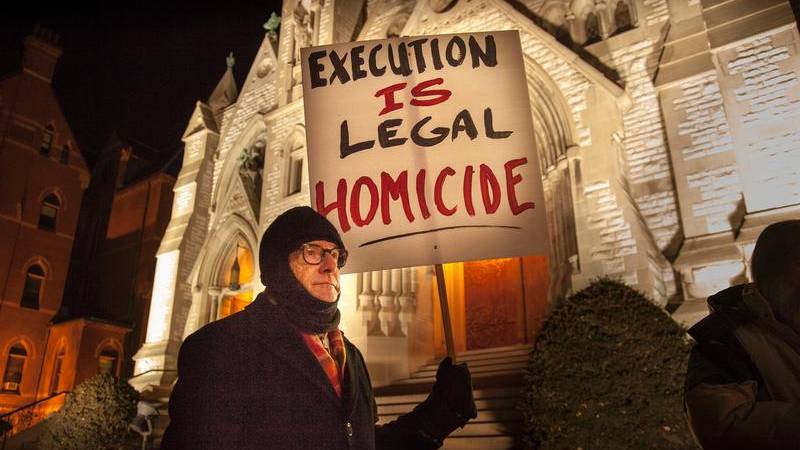 Christian Gohl holds a sign during a vigil outside St. Louis University College Church ahead of the execution of death-row inmate Herbert Smulls of St. Louis. Smulls, was executed Jan. 29, 2014. Convicted in a 1991 murder committed during a jewelry store robbery, Smulls was granted a temporary stay of execution by the U.S. Supreme Court but his appeals ran out and he was put to death by lethal injection. (CNS photo/Lisa Johnston, St. Louis Review)
For the last couple of weeks we've been looking at what Church Doctrine is and why it cannot change. First we defined Doctrine and Dogma and then we tried to come up with a list of Doctrines. Last week we saw some examples of teachings that have changed but that do not represent a change in Doctrine (because Doctrine cannot change). In August of this year, the Vatican announced that Pope Francis had changed the Catholic teaching on the death penalty. This is what started me thinking about how Catholic Doctrine can change or not because a lot of people complained that the pope could not make such a change. Yet the Holy Father in his statement said that he wasn’t “in any way contradicting past teaching,” and that his request “in no way represents a change in doctrine.” At the time, my colleague, Sebastian Gomes, wrote about this. Perhaps all you need to do is read his post from August 2018. Sebastian does a really good job of explaining “development of doctrine.” I did, however, do some research into the matter to show how our understanding of the death penalty has changed which allows for the Church to say that capital punishment is now inadmissible, and I concluded that, in fact, this is not really developing Doctrine. The Doctrine has not changed because the Church's allowance for capital punishment is not Doctrine. What has changed is everything around it and therefore how we apply the Doctrine. Let’s look at what the 1997 Catechism (Second Edition) says:

“Assuming that the guilty party’s identity and responsibility have been fully determined, the traditional teaching of the Church does not exclude recourse to the death penalty, if this is the only possible way of effectively defending human lives against the unjust aggressor.” (CCC 2267. Emphasis my own.)

By "traditional teaching of the Church", it refers to the teaching on “thou shalt not kill” (which is the Dogma in this case). If you pull out your 1992 hard copy of the Catechism, you will see that paragraph 2267 is completely different. That’s because Pope John Paul II made a change to this very paragraph in 1997.

The Gospel of Life

In 1995, Pope John Paul II wrote about the death penalty in his Encyclical Evangelium Vitae. In speaking about how there is a new sensitivity about the legitimacy of war (which can be admissible when it is just), he writes:

“In the same perspective there is evidence of a growing public opposition to the death penalty, even when such a penalty is seen as a kind of ‘legitimate defence’ on the part of society. Modern society in fact has the means of effectively suppressing crime by rendering criminals harmless without definitively denying them the chance to reform.” (EV 27)

Further down, speaking about legitimate defense, he writes:

“This is the context in which to place the problem of the death penalty. On this matter there is a growing tendency, both in the Church and in civil society, to demand that it be applied in a very limited way or even that it be abolished completely. The problem must be viewed in the context of a system of penal justice ever more in line with human dignity and thus, in the end, with God's plan for man and society. The primary purpose of the punishment which society inflicts is ‘to redress the disorder caused by the offence.’ Public authority must redress the violation of personal and social rights by imposing on the offender an adequate punishment for the crime, as a condition for the offender to regain the exercise of his or her freedom. In this way authority also fulfills the purpose of defending public order and ensuring people's safety, while at the same time offering the offender an incentive and help to change his or her behaviour and be rehabilitated. “It is clear that, for these purposes to be achieved, the nature and extent of the punishment must be carefully evaluated and decided upon, and ought not go to the extreme of executing the offender except in cases of absolute necessity: in other words, when it would not be possible otherwise to defend society. Today however, as a result of steady improvements in the organization of the penal system, such cases are very rare, if not practically non-existent.” (EV 56. Emphasis my own.)

The 1997 changes to the Catechism reflect this: The death penalty is allowed (admissible) if this is the only way of effectively defending human lives against the unjust aggressor (emphasis my own). Furthermore, in 1999, in St. Louis, John Paul II said at Mass:

"Modern society has the means of protecting itself, without definitively denying criminals the chance to reform. I renew the appeal I made most recently at Christmas for a consensus to end the death penalty, which is both cruel and unnecessary."

Enter Pope Francis. Number 2267 of the Catechism of the Catholic Church now reads:

“Recourse to the death penalty on the part of legitimate authority, following a fair trial, was long considered an appropriate response to the gravity of certain crimes and an acceptable, albeit extreme, means of safeguarding the common good. “Today, however, there is an increasing awareness that the dignity of the person is not lost even after the commission of very serious crimes. In addition, a new understanding has emerged of the significance of penal sanctions imposed by the state. Lastly, more effective systems of detention have been developed, which ensure the due protection of citizens but, at the same time, do not definitively deprive the guilty of the possibility of redemption." “Consequently, the Church teaches, in the light of the Gospel, that the death penalty is inadmissible because it is an attack on the inviolability and dignity of the person’, and she works with determination for its abolition worldwide.” (Emphasis my own.)

So you see why I will argue that this is not developing Doctrine, nor is it really developing teaching. It is not changing Doctrine because the right for a state to punish criminals by death is not Doctrine. The Doctrine of the Church, a Dogma in this case, is taken right from the Ten Commandments: Thou shalt not kill. How’s that for divinely revealed? What has changed is not even our own understanding of what it means to kill or under what circumstances it may be justifiable to kill another human being. What has changed is our ability to ensure due protection of citizens and provide the possibility of redemption to those who are guilty. The one circumstance where the death penalty would have been permissible by the Church no longer exists. And so, when the 1997 Catechism says that “the Church does not exclude recourse to the death penalty, if this is the only possible way of effectively defending human lives against the unjust aggressor”, the Church is now saying that this no longer applies because in today’s day and age, the death penalty is never the only possible way of effectively defending human lives against an unjust aggressor. Since 1995, when Pope John Paul II wrote Evangelium Vitae, to today when Pope Francis made the latest adjustment, the circumstances when the death penalty would be necessary went from being “practically non-existent” to being "inadmissible". Furthermore, it says that the Church “works with determination for its abolition worldwide.” This is not a Pope Francis thing. Take a look at the USCCB’s list of documents on the death penalty. Many call for the abolition of Capital Punishment. In particular, I’d like you to read the 1980 Bishops’ Statement on Capital Punishment. And while you’re at it, read Evangelium Vitae. Always love to hear your thoughts and comments. Please do write.