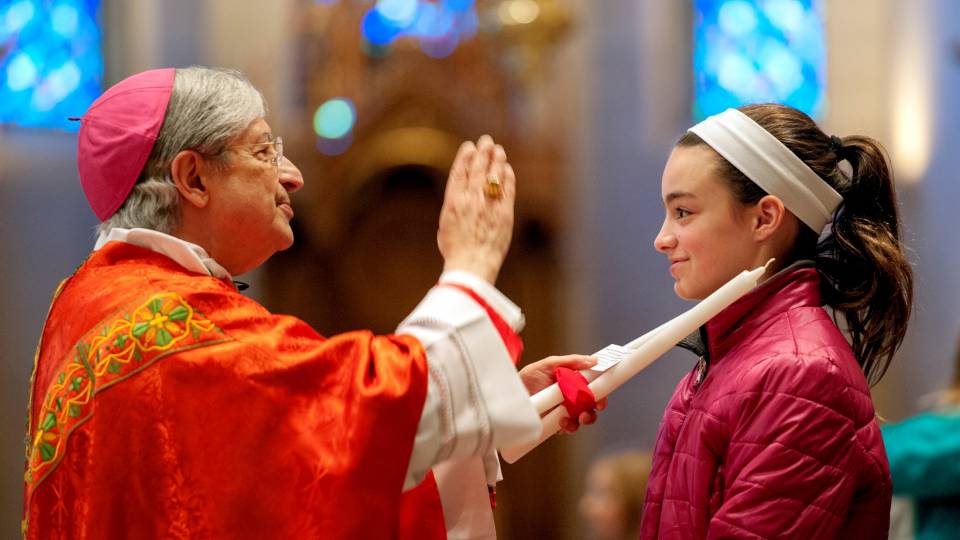 Bishop Salvatore R. Matano of Rochester, N.Y., blesses the throat of a student from St. Mary School in Canandaigua, following a Mass on the feast of St. Blaise at Sacred Heart Cathedral in Rochester. The blessing invokes the intercession of the fourth-century bishop and martyr credited with saving the life of a boy who was choking on a fish bone. (CNS photo/Mike Crupi, Catholic Courier)
Today is the Feast of St. Blaise. You may know St. Blaise because traditionally, on his feast day, people gather in churches for a blessing of throats. The story is that St. Blaise helped a young boy who was choking on a fish bone. Tradition holds that Blaise was not only a bishop but also a physician. I grew up hearing the name of St. Blaise because one of the Indigenous territories in Panama is named after him: San Blas. Still, I had never experienced or even heard of the devotion of the blessing of throats until I moved to Canada.

And that got me thinking about two things: devotions and sacramentals.

I’d like to start with devotions. Sometimes we refer to them as popular piety, or popular devotions. In #1674, the Catechism of the Catholic Church says that “the Christian people has always found expression in various forms of piety surrounding the Church’s sacramental life.” It then gives examples of these devotions: relics, pilgrimages, processions, Stations of the Cross, the Rosary, and medals. The one thing we must remember about these practices is that they should never replace the liturgical life of the Church. This happens very often in North America, where people may never go to Sunday Mass but hold on with an inflexible religiosity to a particular devotion because “we always did that back home”. The devotion should complement the Liturgy. It should work together with Liturgy and should be in sync with the Liturgical seasons.

In fact, the devotion should lead people to the Liturgy.

Devotions should also lead people to Christ. If whatever you are doing is not bringing you closer to Jesus Christ, then it is a hindrance rather than a help in your Christian walk. In #1676 the Catechism quotes the Final Document of the 1979 Puebla Conference of the Latin American Bishops Conference, #448:

“At its core the piety of the people is a storehouse of values that offers answers of Christian wisdom to the great questions of life. The Catholic wisdom of the people is capable of fashioning a vital synthesis.... It creatively combines the divine and the human, Christ and Mary, spirit and body, communion and institution, person and community, faith and homeland, intelligence and emotion.”

“For the people this wisdom is also a principle of discernment and an evangelical instinct through which they spontaneously sense when the Gospel is served in the Church and when it is emptied of its content and stifled by other interests.”

It’s clear that devotions and popular piety are an important part of our Tradition. The 2001 Directory on Popular Piety and the Liturgy from the Congregation for Divine Worship and the Discipline of the Sacraments gives all the principles and guidelines for integrating Liturgy with popular piety. It distinguishes between devotions, popular piety, and popular religiosity. • Devotions: Various external practices (e.g., prayers, hymns, observances attached to particular times or places, insignia, medals, habits, or customs). (#8) • Popular piety: Diverse cultic expressions of a private or community nature which, in the context of the Christian faith, are inspired predominantly not by the Sacred Liturgy but by forms deriving from a particular nation or people or from their culture. (#9) • Popular religiosity is a bit different: The Directory says that it “refers to a universal experience: there is always a religious dimension in the hearts of people, nations, and their collective expressions. All peoples tend to give expression to their totalizing view of the transcendent, their concept of nature, society, and history through cultic means. Such characteristic syntheses are of major spiritual and human importance. Popular religiosity does not always necessarily refer to Christian revelation.” (#10) As a response to the Protestant practice of destroying icons, images, and monuments, the Church had to define her position on devotions. At the Council of Trent in 1563, it affirmed that sacred images were permitted. The Second Decree of its Twenty Fifth Session was on “The Invocation, Veneration and Relics of Saints and Sacred Images”, and it set general standards in order to prevent people from falling into error and superstition. It made clear that if any of these devotions, in particular sacred images, teach or entertain sentiments that are contrary to “these decrees”, they should be abolished. In 1987, St. John Paul II visited La Serena, Chile. At a celebration of the Liturgy of the Word, he commented on the Christian faith of the people, manifested in the various shrines and pilgrimages, feasts and religious dances. During the Liturgy he was asked to bless several images of Our Lady. The altar was adorned with various representations of Mary: Our Lady of Andacollo, Our Lady of La Candelaria and Carmel; and of Jesus: the Holy Child of Sotaquí, of San Pedro de Coquimbo, San Isidro de Illapel, and Cruz de Mayo. In his homily he said:

“Popular Piety is a true treasure of the People of God. It is a continual showing of the active presence of the Holy Spirit in the Church. He is the one who enkindles in the hearts, faith, hope and love, high virtues that give value to Christian piety. It is the same Spirit that ennobles so many and varied forms of expressing the Christian message in accordance with the culture and proper customs of each place in all times.”

“These same religious customs, passed on from generation to generation, are true lessons in Christian living: from personal or family prayers that you learned directly from your parents, to the pilgrimages that gather crowds of the faithful at the great feasts in your shrines.”

“Popular piety has rightly been regarded as 'a treasure of the people of God' and 'manifests a thirst for God known only to the poor and to the humble, rendering them capable of a generosity and of sacrifice to the point of heroism in testifying to the faith while displaying an acute sense of the profound attributes of God: paternity, providence, His constant and loving presence. It also generates interior attitudes otherwise rarely seen to the same degree: patience, an awareness of the Cross in every-day life, detachment, openness to others and devotion.'" (#15)

Some Catholics recoil at the over-emphasis of certain devotions or pieties. Others rely heavily on them. I will never forget my grandmother’s devotion to St. Jude, to whom she prayed every night, or the prayer to Mary that she had to have framed and displayed with an image of Our Lady to protect her home from thefts, disasters, and all kinds of perils.

I now have that same prayer displayed in my home.

Some Catholics have a strong devotion or reverence to relics. For others, pilgrimages are of great importance. Others swear by the Rosary or other Marian devotions. The bottom line is this: Do these help you get closer to Jesus? If they don’t, or if they get in the way of your Christian walk, then they are no longer devotions but distractions. Some of you may be attending a blessing of throats today. If you go, the priest or deacon will take two candles (that were blessed yesterday on the Feast of Candlemas), cross them over your throat and say a short healing prayer:

“Through the intercession of Saint Blaise, bishop and martyr, may God deliver you from every disease of the throat and from every other illness.”

It is not really intended to protect you from a cold, the flu, or the coronavirus. It is meant to help you recognize that God is our healing. It is a blessing. When we bless something or someone, we are asking God’s blessing upon them; we are asking God to make them or the situation sacred and shower them or it with His gifts. It’s not an antidote against disease. That would be a superstitious approach to the devotion. May St. Blaise and his intercession bring you closer to Christ and help you in your Christian walk. Come back next week and we'll look at sacramentals.