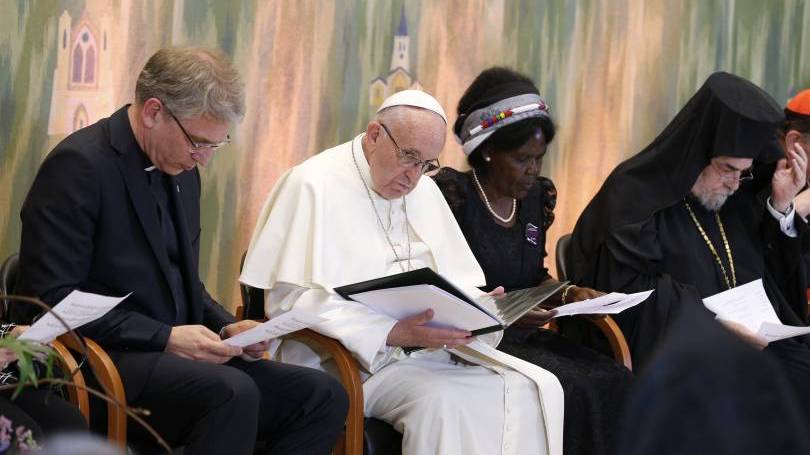 Pope Francis and church leaders at the World Council of Churches' ecumenical centre in Geneva on June 21, 2018. (CNS photo/Paul Haring)
Christian churches around the world will be celebrating the Week of Prayer for Christian Unity from January 18 to the 25th. During this annual ecumenical celebration, Christians are invited to pray for the unity of all Christians, to reflect on scripture together, to participate in jointly-organized ecumenical services, and to share in fellowship. The celebration has been taking place for almost 110 years and is usually celebrated around the world between the Feast of the Confession of Saint Peter and the Feast of the Conversion of Saint Paul. In the southern hemisphere, it is often celebrated during the Pentecost season. I encourage everyone to visit the Week of Prayer website to find out more about the history of this event. Each year’s theme for the Week of Prayer for Christian Unity comes from a different country. The theme for this year comes from Indonesia: “Justice, and only justice, you shall pursue,” taken from Deuteronomy 16:18-20. The Week’s organizers tell us that this theme calls us to move from shared prayer to shared action. Drawing on the traditional values of Bhineka Tunggal Ika (Unity in Diversity) and gotong royong (living in solidarity and by collaboration), Indonesian Christians invite us to be a united witness and an agent of Christ’s healing grace in a broken world by making specific commitments to justice, equality, and unity. If you’ve never heard the term, ecumenism is the movement promoting unity among Christian denominations. The word refers to the “representation of the entire (Christian) world,” as it comes from the Latin oecumenicus, meaning “general” or “universal.” The Latin actually comes from the Greek oikoumenikos, which is a word that referred to “the inhabited world” as known to the ancient Greeks. In the Gospel of John, Christ prays for his disciples before going to the cross. He asks that his followers “may all be one,” as he and the Father are one, “so that the world may believe” and have life in his name (John 17). Christian unity is here made central to the very being of the church and to its mission and witness. The work of ecumenism predates Vatican II. Since the beginning, Christians have been sorting out what Jesus meant when He prayed in John 17:20, “may they all be one.” But Vatican II put out a Decree on Ecumenism, Unitatis Redintegratio. It is a great document, and I encourage you to read it:

All the faithful should remember that the more effort they make to live holier lives according to the Gospel, the better will they further Christian unity and put it into practice. For the closer their union with the Father, the Word, and the Spirit, the more deeply and easily will they be able to grow in mutual brotherly love. This change of heart and holiness of life, along with public and private prayer for the unity of Christians, should be regarded as the soul of the whole ecumenical movement, and merits the name, “spiritual ecumenism”.

I have a love for ecumenical work. My grandfather and his family were Baptist; one of my best friends growing up was the son of the Episcopal bishop, and I attended the Episcopal school. I wish more parishes and Christian congregations would do more to build relations with each other. I’ve written that when I was in the Middle East, working on Living Stones in 2013, I was humbled at how the Melkites, the Greek Orthodox, the Roman Catholics, the Protestants, and Anglicans have no issue praying together and, in certain circumstances, worshiping together. In fact, over there, they don’t refer to themselves as “Catholic” or “Lutheran” or “Copt” or “Maronite.” They’re all “Christians.” Isn’t that what Jesus prayed for?

There are many things that we can do together as Christians.

We can serve together. We can do social justice and pro-life work together. We can even pray together! The theological differences that keep us apart are so minimal. We need to heal these divisions, foster dialogue (so we can discover the many things we have in common), work together, and honour our diversity. And not only during one week a year. We need to do it all year round! Today, on the Feast of the Baptism of Our Lord, let's remember that all Christians share one baptism. We all have the same baptism. There's communion in that! It’s still not too late to plan your ecumenical service. For resources visit the Week of Prayer for Christian Unity website. May we all be one.