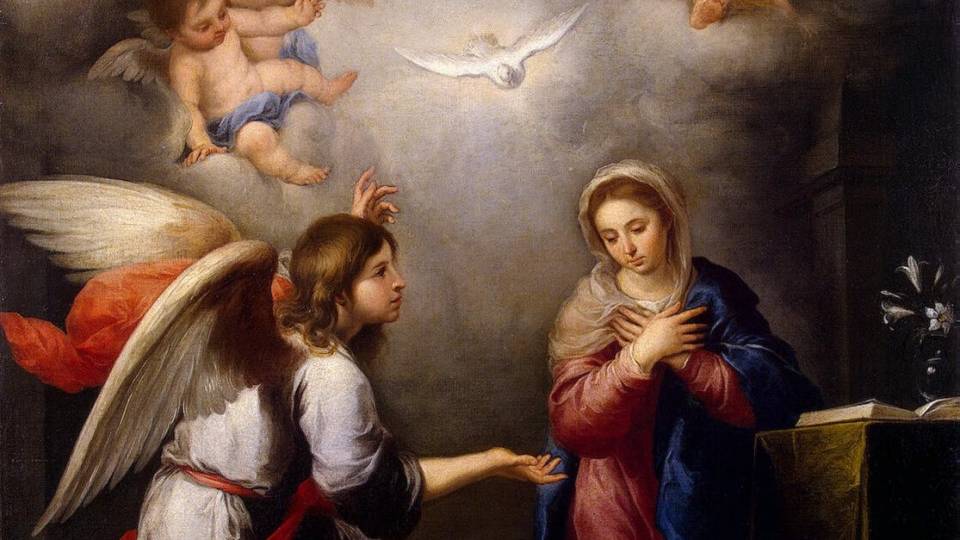 In her perfect union with the Holy Spirit, Mary models for us the profound link between marriage and celibacy. (Image: detail of The Annunciation by Bartolomé Esteban Murillo. Source: Wikimedia Commons)
Last week we began looking at the topic of celibacy. I hope that it helped clarify much because I find that when it comes to celibacy (and chastity in general) in the Church, there is a lot of confusion among Catholics and non-Catholics alike. This conversation came out of a previous conversation about the married priesthood, which was one of the “hot topics” being debated at the Synod on the Amazon. As it turns out, in the final document, the recommendations said very little about considering the married priesthood. The recommendation was to consider ordaining to the priesthood recognized men in the community who have a fruitful permanent diaconate. So it’s not to ordain any married man to the priesthood but to consider ordaining to the priesthood permanent deacons who are well established and well-respected in the community. And likely, their priestly faculties would be limited to their own diocese.

Having said that, there is nothing wrong or anti-doctrine with ordaining married men to the priesthood.

You can read all about that in my posts from three weeks and two weeks ago. This week, I want to continue the topic of celibacy because, as I wrote last week, just because the Church may be considering ordaining married men to the priesthood (and thereby lifting the discipline of celibacy from the diocesan, or secular, priesthood), it does not mean that we are doing away with celibacy. And people seem to make such a huge deal about how difficult celibacy must be for priests, yet just last week, a friend commented that she wouldn't struggle much with celibacy: “I would have more difficulty with the vow of obedience!” So there you go: All three vows required of people in consecrated life – poverty, chastity, and obedience – are counter-cultural and difficult.

I didn’t really begin to understand celibacy until I understood marriage.

And I began to understand marriage when I studied St. John Paul II’s Theology of the Body. Between 1979 and 1984, Pope John Paul II gave a series of 129 lectures during his General Audiences on the topic of human sexuality. This is what has come to be known as Theology of the Body (ToB). According to Theology of the Body expert, Christopher West, ToB says that marriage, sex, and celibacy are equally valuable, and when any of them is devalued or overvalued, it leads to suffering: divorce and a decline in religious vocations. We might think that celibacy is a contradiction of marriage, but it isn’t. They are very much interrelated and interdependent. ToB explains that as a Sacrament, the “one-flesh” union of Matrimony is a sign and foreshadowing of the perfect nuptial union with God that we all desire. That’s why Jesus says that there is no marriage in Heaven (Matthew 22:30). It’s because in Heaven we will all be “married” to God. In that fruitful and total union that can only take place between one man and one woman, we come closest to be an image of God, who loves us freely, faithfully, fruitfully, and totally. Marriage not only images God, but it foreshadows the way God longs to be united to us. Earthly marriage is the closest we can come to that divine union. We are all created for marriage. That’s what’s natural because we are all created for marriage with God. Those who choose celibacy are “skipping” the Sacrament in anticipation of the real thing. Mary is "ever-Virgin" because she already had that perfect union with the Holy Spirit! She is not a virgin because she's missing something; she's a virgin because she is in perfect union with something much greater!

Those who choose celibacy are a sign or “icon” to the rest of us of the eternal heavenly nuptial union where all of us are headed.

And so, celibacy, just as marriage, is about love. That’s also why the terms “father, mother, sister, and brother” are applicable to both marriage and celibacy. Christopher West says that both marriage and celibacy are indispensable in building the family of God. Marriage reveals the nuptial character of celibacy, and celibacy reveals that the ultimate purpose of marriage is to prepare for Heaven. Let’s leave it at that. There’s enough there to ponder for a while. Come back next week and we’ll look at more questions people have about celibacy which Theology of the Body answers very clearly.