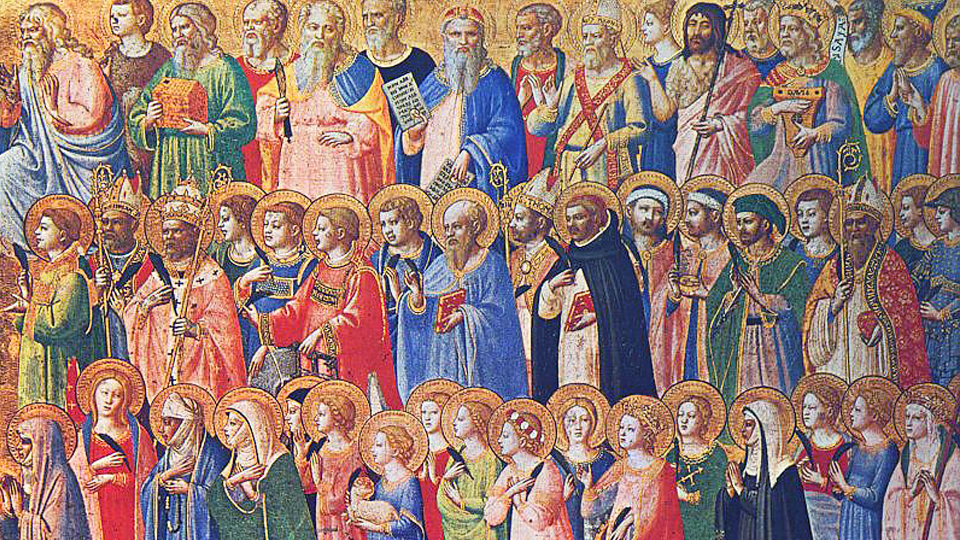 I wrote this a few years ago. Thought it would be good to share it again with you. Enjoy and Happy Feast of All Saints!
Last night, speaking with my kids about what costumes would be suitable for Halloween, it occurred to me that some characters from the Book of Revelation would probably make for good costumes. And then I thought of today’s first reading, one of my favourite Scripture passages:

”And there was a great multitude that no one could count, from every nation, from all tribes and peoples and languages.”

This is how the Book of Revelation describes a heavenly scene –- a scene where there are countless numbers of people, myriads of angels, heavenly creatures, all the souls of the just -– all of them, standing before the throne of God, in eternal worship.
Today we celebrate the Solemnity of All Saints. As Catholics, we love Saints, we honour them, we learn from them, we let them intercede for us, pray for us. For some people, this idea of “saints” may be confusing, but it’s clear from a quick read of the Book of Revelation that the idea of “saints in heaven” makes perfect sense.
I know that Revelation is not a book that many people enjoy reading. It’s not a book that most people understand and in popular culture it’s got a bit of a bad rap. Most of what we hear is that it’s about the end of the world, that it contains prophecies about the final judgment, that there is going to be a battle between the anti-Christ and the Archangel Michael, and so on. Let me take the opportunity to tell you that everyone can read and understand the Book of Revelation. Let me give you a few pointers today and then tomorrow I’ll look specifically at today’s reading.
The Greek name of the book is Apokalypsis, which is why in English sometimes you hear about the “Apocalypse”. But the word apocalypse has nothing to do with cataclysmic end-of-the-world events. Apocalypsis means “unveiling”, as in lifting a veil. It means “to reveal.” That’s why the name of the book in English is “Revelation.” This is a book that reveals something to us about Christ. Actually, the first words of the book are “The revelation of Christ…” So, in fact, in this book, Christ himself is revealing something to us: He is revealing himself to us.
No one knows who wrote it except that his name is John. Whether he is John the evangelist or John the disciple or some other John, no one knows. All we know is that this John was in the island of Patmos, a Greek island in the Aegean Sea where Christian exiles were sent. So, it’s possible that John had been sent there because of some Christian persecution. This is why many scholars believe that the Book of Revelation is directed at persecuted Christians to give them hope in the midst of the crises and to encourage them to persevere in their faith. Even though you may be experiencing beasts, dragons and martyrdom, in the end Christ will win and you will all be in heaven with Him shortly.
Other scholars believe that the book is actually written not for persecuted Christians, but for very comfortable Christians who were quite content to live in the Greco-Roman world and culture. These were Christians who, maybe, were compromising their beliefs a bit. They were “Sunday Christians” -– Christians who didn’t walk the talk. They professed Christianity with their lips, with empty ritual, but were content to continue with certain aspects of the current culture. Not unlike today. We don’t have to imagine a Pope Benedict writing a letter dealing with the topic of relativism in a world where Catholics have fallen into the cycle of ritualistic observance, while being content to accept many of the false ideas of the day. We know exactly what that is all about. That’s why I like this explanation much better than the one about persecuted Christians — because I can relate. I am not a persecuted Christian but, in many ways, I am a Christian who can easily get confused by the conflicting yet popular messages and half-truths of the time.
So, John is writing to Christians who became too comfortable. Can you imagine that already happening at the end of the first century? The resurrection had taken place maybe 50 years earlier, and already relativism was at work.
The book begins with seven specific messages to seven churches (Rev 1:4-3:22). We know that there were more than seven churches or church communities at the time, so maybe these seven represent the main problems that Christians were facing. But what are the problems described? “You tolerate the teachings of Jezebel” (Rev 2:20-21) and “accepted the teachings of the Nicolaitans and of Balaam” (Rev. 2:14-15). “You have grown lukewarm” (Rev 3:16) and “you’ve abandoned the love you had at first” (Rev 2:4). These could be problems that each of us could face today. And each letter ends with a promise to the “victor”. Those who are victorious will receive their reward.
A lot of the things we hear about Revelation have to do with the idea that it is more about the punishment for those who worship the beast or follow the anti-Christ. But again, if you read it carefully, you’ll see that it is just as much about the Triumph of Christ and the reward for these “victors”.
And so, to go back to my earlier post about Halloween, Miri R’s comment reminded me of this: false prophets. The Book of Revelation is about lifting the veil. It is about revealing what’s really underneath. It is the revelation of Jesus Christ, but, in some way, it also reveals these false prophets and false messages of the day. We can do this with Halloween celebrations by thinking they are harmless and we can also do it by putting too much emphasis on saints and other devotions. Salvation belongs only to God and to the Lamb and to Him be only blessing, glory, wisdom, thanksgiving, honour and power.
Tomorrow, as we pray for All Souls, we’ll look at Revelation 7:2-14.