Deacon-structing 50 Years of Abortion in Canada 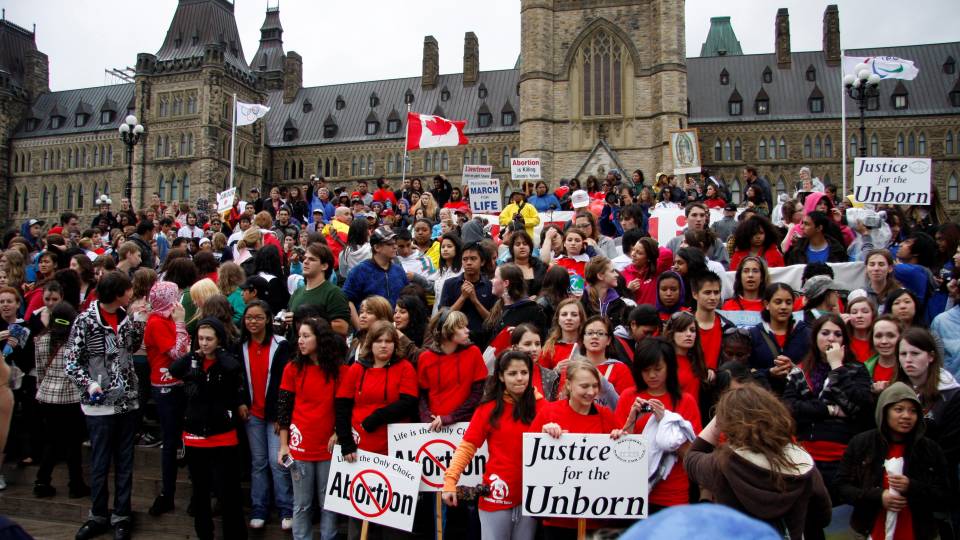 Photo: Salt + Light Media
This year we marked the 50th anniversary of the bill introduced by Prime Minister Pierre Trudeau – the father of our current prime minister, Justin – which decriminalized abortion in Canada. A hundred years before that, since 1869, abortion was illegal in this country. Here is a chronology of how we got to where we are. 1892 Canada enacts the first Criminal Code. It prohibits abortion. 1955 The law is amended to clarify that abortion is prohibited even in cases when the life of the mother is at risk. 1959 Chatelaine Magazine publishes an article entitled, “Should Canada change its abortion law?” 1961 The Globe and Mail and the United Church Observer publish editorials and articles calling for changes to the Criminal Code. 1963 The Canadian Bar Association and the Canadian Medical Association begin to advocate for abortions to protect the life of the mother. 1964 The United Church and the Anglican Church in Canada begin favouring exceptions to abortion prohibitions. 1966 Liberal Member of Parliament Ian Wahn introduces a bill liberalizing abortion and contraception. NDP Ontario MPP Stephen Lewis introduces a bill to liberalize abortion. 1967 The federal government creates a Royal Commission on the Status of Women.

This commission recommends that abortion be made legal for the first 12 weeks of pregnancy and after 12 weeks legal only if the life of the woman is threatened by the pregnancy or if the child would be expected to be born with great mental or physical disability. In response to this recommendation, the government of Pierre Trudeau passes Omnibus Bill C-195, which makes abortion legal if a three-person Therapeutic Abortion Committee rules that the pregnancy endangers the woman’s life. Henry Morgentaler defies section 251 of the Criminal Code and begins performing abortions without the approval of Therapeutic Abortion Committees.

This begins 20 years of legal battles.

1970 The Vancouver Women’s Caucus organizes the Abortion Caravan, traveling from Vancouver to Ottawa where 500 women hold 2 days of demonstrations – some chaining themselves to the Parliamentary Gallery. 1971-1973 Henry Morgentaler is charged 10 times and tried twice. At first he is acquitted and then, in 1974, is found guilty by the Quebec Court of Appeal. Morgentaler then appeals to the Supreme Court. 1973 Morgentaler announces that he has performed more than 5000 abortions. The national pro-life group, Coalition for Life, is founded. 1974 The Canadian Abortion Rights League (CARAL) is founded. 1975 The Supreme Court upholds the 1974 Morgentaler conviction and sentences him to 18 months in prison. While in prison, he is tried on a second charge and acquitted. A petition against abortion with more than 1 million signatures is delivered to parliament. (Read more about this petition and learn about this year's petition: Deacon-structing Petition of One Million.) 1976 After a few more charges and trials, Henry Morgentaler is released from all charges. 1977-1983 Morgentaler continues opening abortion facilities in defiance of section 251. Morgentaler and his colleagues are again charged. 1978 A second pro-life group, Campaign Life, is founded. 1982 Canada enacts the Canadian Charter of Rights and Freedoms. 1983 Former Manitoba politician Joe Borowski argues that the Charter of Rights protects the fetus’ right to life and launches a court case challenging the 1969 amendments to the Criminal Code. 1984 Henry Morgentaler and colleagues are acquitted of the 1983 charges. 1985 There are more charges against Morgentaler in Manitoba.  In Ontario, the Attorney General appeals the 1984 acquittal, but the Court of Appeal orders a new trial. Morgentaler appeals to the Supreme Court. 1986 There are more charges against Henry Morgentaler in Toronto. The following year they are dropped. Campaign Life and Coalition for Life merge to form Campaign Life Coalition. 1987 The BC Coalition for Abortion Clinics is founded. 1988 As a result of Morgentaler's appeal, the Supreme Court strikes down the abortion law as unconstitutional. The law is found to violate section 7 of the Canadian Charter of Rights and Freedoms because it infringes on the woman’s "right to life, liberty and security of the person".*  This didn’t seem to make much difference since the Therapeutic Abortion Committees already authorized most abortions. Still, Canada becomes one of the few countries in the world without a law restricting abortion. (*You may think that the child's "right to life" takes precedence over the woman's right to liberty, however, Section 223(1) of the Criminal Code of Canada says that a child becomes a human being when it has "completely proceeded, in a living state, from the body of its mother." In other words, the "right to life" does not apply to an unborn child since the Criminal Code does not grant the fetus juridical personality.)

Abortion is now treated like any other medical procedure.

1989 Borowski’s case makes it to the Supreme Court, which dismisses the appeal. As a result of the Tremblay v. Daigle case, the Supreme Court finds that a fetus has no legal status in Canada as a person, either in Canadian common law or in Quebec civil law. Therefore, it also rules that a man (even the father of the unborn child) has no right to veto a woman’s decision to have an abortion. The federal government of Brian Mulroney introduces Bill C-43, an amendment that would prohibit abortion and sentence doctors to two years in jail for performing abortions where the woman’s life is not at risk. This was an effort to legislate abortion since the 1988 ruling left Canada without laws regulating abortion. The House of Commons passes Bill C-43. 1990 Bill C-43 dies in the Senate. (For more about Bill C-43, read this Globe and Mail article.) 1994 British Columbia abortionist Garson Romalis is shot but not killed. As a response, the provincial government introduces the Access to Abortion Services Act, which prohibits protests outside abortion facilities and abortionists’ homes and offices. In the next years, several other facilities across the country obtain similar injunctions preventing protests. 1995 Another abortionist is shot in Ontario and in 1997 one in Manitoba. Both survive the shootings. 2000 Liberal Leader (and future Prime Minister) Jean Chretien, regarding a referendum on the issue, says: "We have had social peace on the question of abortion," and "I don't believe that Canadian women will be very happy with that."

The next year there were 106,418 abortions performed in Canada.

2004 The Canadian Abortion Rights League (CARAL) is disbanded. 2005 The Abortion Rights Coalition of Canada is formed. 2007 Bill C-484, the Unborn Victims of Crime Act, introduced by MP Ken Epp, passes in Parliament, but the bill dies when an election is called in the fall of 2008. Prime Minister Stephen Harper had voted in favour of the bill. 2008 Henry Morgentaler is awarded the Order of Canada. Many other members of the order return their medals in protest, including Cardinal Jean-Claude Turcotte, Archbishop of Montreal, and Gilbert Finn, Lieutenant-Governor of New Brunswick. Madonna House also returned the medal given to their founder, Catherine Doherty. The first 40 Days for Life campaigns of prayer and fasting to end abortion take place in September in Ottawa and Halifax. 2009 Morgentaler sues the New Brunswick government for not covering the cost of abortions performed in facilities outside hospitals. On May 14, on the 40th anniversary of the decriminalization of abortion, 12,000 protesters gather for the largest March for Life up to that date. 2010 Conservative MP Rob Bruinooge introduces Bill C-510, which prevents coercion of pregnant women to abort. The bill is defeated in the second reading. 2012 Conservative MP Stephen Woodworth introduces Motion 312, which would form a committee to study when life begins. The motion is defeated. 2013 Conservative MP Mark Warawa introduces Motion 408, which condemns sex-selective abortion. The motion is deemed “non-votable” by a four-person committee. 2015 The abortion drugs mifepristone (RU-486) and misprostol are approved by Health Canada to be used up to the 49th day of pregnancy (medical or chemical abortions).

300 pregnancies are terminated every day in Canada. In the last 50 years, approximately 3.2 million unborn babies have been killed.

While abortion was decriminalized in 1969, to this day, 50 years later, there is still no abortion law. This means that there are no regulations of any kind and abortion is free, fully funded by tax-payers, for any reason, and available at any stage in pregnancy, right up to the moment of birth. Canada is the only democracy in the world with no abortion law. Even very liberal countries like Spain, Germany, and France limit abortions to the first 12 weeks of pregnancy – not so in Canada. [See statistics from the Abortion Rights Coalition of Canada. According to Campaign Life Coalition, pro-life blogger Pat Maloney, who writes at Run With Life, used a Freedom of Access to Information Request and discovered that, according to the Canadian Institute for Health Information (CIHI), in 2018-2019 there were 910 late-term abortions in Canada (only includes numbers from hospitals outside of the Province of Quebec) and 150 born-alive abortions. Among those born-alive, 20 were older than 25 weeks gestation, 107 were between 21 and 24 weeks, and 23 were at 20 weeks.]

Since 1988 politicians continue stating that they will not re-open the abortion debate, yet most Canadians are generally ignorant of even the most basic facts of the issue and largely incapable of discussing it. Those who support the right to abortion have never been forced to define their beliefs through legislation and the rest of Canadians have been given permission to not think about the issue at all.

It seems to me that the issue is not closed.

This is where the Church can lead the conversation with our consistent ethic of life, protecting the life of the unborn and also supporting women, especially those who are poor and who find themselves without a choice. That’s what it means to support all human rights.

Every week, Deacon Pedro takes a particular topic apart, not so much to explore or explain the subject to its fullness, but rather to provide insights that will deepen our understanding of the subject. And don’t worry, at the end of the day he always puts the pieces back together. There are no limits to deaconstructing: Write to him and ask any questions about the faith or Church teaching: pedro@saltandlighttv.org . Tune in now and watch Deacon-structing on TV!