"With regard to interreligious dialogue, much still needs to be done."-Pope Benedict XVI on Day 2 in Cyprus

While most of us here in Toronto were still tucked in our beds, Pope Benedict XVI's schedule for his second day in Cyprus had already kicked into high gear and thus the day for the S+L Cyprus crew began at 2:30 am ET. 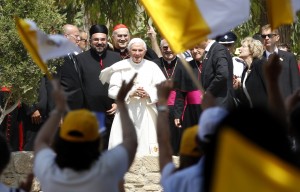 The Holy Father's itinerary and the groups with whom he will be meeting today was dictated by the ecumenical, political and pastoral needs of the area, says S+L Cyprus coverage co-host Rita Sawaya, who lived in Cyprus several years ago. Rita also explained that the Holy Father's schedule was obviously carefully crafted by the organizers with the precariousness of the geopolitical situation of Cyprus in mind. This morning, the Holy Father had a closed-door meeting with Demetris Christofias, the President of Cyprus wherein they discussed "the painful military occupation of more than 36 percent of its territory," since the Turkish invasion of the Republic of Cyprus beginning in 1974. Christofias said he was seeking a "just, viable and functional solution to the Cyprus problem" by means of of a "bizonal, bicommunal federation with political equality for the two communities." After his meeting with the President, the Holy Father addressed various diplomats and government officials. Here , he was serenaded with a troupe of young violinists before delivering his first official address of the day: 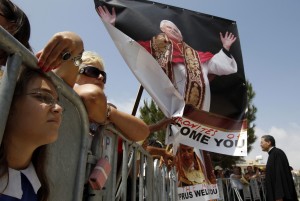 Pope Benedict then made his way to St. Maron School, a small Catholic school in Nicosia, where he met with members of the Cyprian Catholic community. In his address to the tiny community of Roman Catholics on the Mediterranean isle, he told those present that their "unique predicament" afforded them the opportunity to "search for greater unity in charity with other Christians and dialogue with those who are not Christians". "Given your circumstances," the Holy Father said, " you are able to make your personal contribution to the goal of greater Christian unity in your daily lives". See complete text of the Holy Father's address on the sports field at St. Maron's School:

Dear brothers and sisters in Christ, [1] It gives me great joy to be with you, the representatives of the Catholic community in Cyprus. I thank Archbishop Soueif for his kind words of welcome on your behalf and I thank in a special way the children for their beautiful presentation. I also greet His Beatitude Patriarch Fouad Twal, and salute the great and patient work of the Franciscan Custody of the Holy Land in the person of Father Pizzaballa, here with us today. On this historic occasion of the first visit of the Bishop of Rome to Cyprus, I come to confirm you in your faith in Jesus Christ and to encourage you to remain of one heart and one soul in fidelity to the apostolic tradition (cf. Acts 4:32). As the Successor of Peter, I stand among you today to offer you the assurance of my support, my affectionate prayers and my encouragement. We have just heard from the Gospel of John how some Greeks, who had learned of the great works which Jesus was performing, approached the Apostle Philip and said, “We wish to see Jesus” (cf. Jn 12:21). These words touch all of us deeply. Like the men and women in the Gospel, we wish to see Jesus, to know him, to love and to serve him, with “one heart and soul”. Furthermore, like the voice from heaven in today’s Gospel which testified to the glory of God’s name, the Church proclaims his name not simply for her own sake, but for the good of humanity as a whole (cf. Jn 12:30). You too, Christ’s followers of today, are called to live your faith in the world by adding your voices and actions to the promotion of the Gospel values handed down to you by generations of Cypriot Christians. These values, deeply embedded in your own culture as well as in the patrimony of the universal Church, should continue to inspire your efforts to promote peace, justice and respect for human life and the dignity of your fellow citizens. In this way, your fidelity to the Gospel will surely benefit all Cypriot society. Dear brothers and sisters, given your unique circumstances, I would also like to draw your attention to an essential part of our Church’s life and mission, namely the search for greater unity in charity with other Christians and dialogue with those who are not Christians. Especially since the Second Vatican Council, the Church has been committed to advancing along the path of greater understanding with our fellow Christans with a view to ever stronger ties of love and fellowship among all the baptized. Given your circumstances, you are able to make your personal contribution to the goal of greater Christian unity in your daily lives. Let me encourage you to do so, confident that the Spirit of the Lord, who prayed that his followers might be one (cf. Jn 17:21), will accompany you in this important task. With regard to interreligious dialogue, much still needs to be done throughout the world. This is another area where Catholics in Cyprus often live in circumstances which afford them opportunities for right and prudent action. Only by patient work can mutual trust be built, the burden of history overcome, and the political and cultural differences between peoples become a motive to work for deeper understanding. I urge you to help create such mutual trust between Christians and non-Christians as a basis for building lasting peace and harmony between peoples of different religions, political regions and cultural backgrounds. Dear friends, I would invite you to look to the profound communion that you already share among yourselves and with the Catholic Church throughout the world. With regard to the immediate needs of the Church, I encourage you to pray for and to foster vocations to the priesthood and religious life. As this Year for Priests draws to a close, the Church has gained a renewed awareness of the need for good, holy and well-formed priests. She needs men and women religious completely committed to Christ and to the spread of God’s reign on earth. Our Lord has promised that those who lay down their lives in imitation of him will keep them for eternal life (cf. Jn 12:25). I ask parents to ponder this promise and to encourage their children to respond generously to the Lord’s call. I urge pastors to attend to the young, to their needs and aspirations, and to form them in the fullness of the faith. Here in this Catholic school, let me also address a word to those working in the Catholic schools of the island, especially the teachers. Your work is part of a long and esteemed tradition of the Catholic Church in Cyprus. Continue patiently to serve the good of the whole community by striving for educational excellence. May the Lord bless you abundantly in the sacred trust which is the formation of almighty God’s most precious gift to us - our children. I now address a special word to you, my dear young Catholics of Cyprus. [1] Be strong in your faith, joyful in God’s service and generous with your time and talents! Help to build a better future for the Church and for your country in placing the good of others before your own. Dear Catholics of Cyprus, foster your own harmony in communion with the universal Church and with the Successor of Peter, and build up your fraternal bonds with each other in faith, hope and love. With these few words, I entrust all of you to the protection of the Blessed Virgin Mary and the intercession of Saints Paul and Barnabas. [1] God bless you all!