Consultation, Collegiality, and Creativity: What Pope Francis Learned about Authority 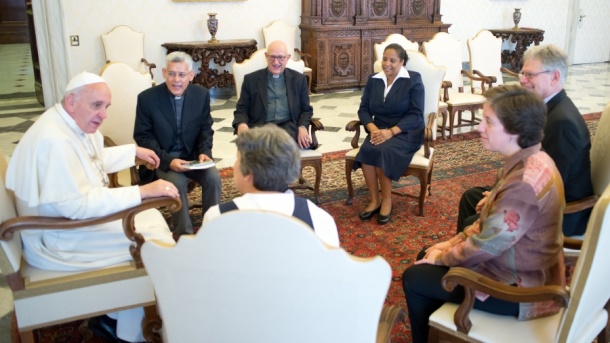 By Peter Folan, SJ
“In my experience as superior in the Society, to be honest, I have not always behaved in that way — that is, I did not always do the necessary consultation. And this was not a good thing. My style of government as a Jesuit at the beginning had many faults.”
Like a good parish priest, I am about to spend my day off playing golf. And like the below-average golfer that I am, I have only two or three clubs in my bag that I hit somewhat well. Thanks to the set of interviews released globally just yesterday, Pope Francis told the world that, as a young Jesuit superior, he was, so to speak, a one-club golfer, someone who in many, and, perhaps, in too many situations, reached for the club of authoritarianism.
On the one hand, who can blame him? Exercising authority to get people to help realize one’s vision is often the quickest way to govern. Parents whose children try to cross a street unattended, teachers whose students cause a ruckus in the classroom, and librarians whose patrons require constant shushing will, I presume, agree with me. But the quickest solution is often not the best one.
Now, with the benefit of more than four decades of reflection upon his first turn as a Jesuit superior, the pope acknowledged this club’s limitations: “It was my authoritarian way of making decisions that created problems.” Such candid self-reflection serves as yet another reminder that Francis too is a pilgrim trying to find his way forward, stumbles, missteps, and all. He too is, to use his own words, “a sinner.” But even more significantly, he is a sinner who learned something very significant about his earliest style of governance: “Eventually people get tired of authoritarianism.”
This doesn’t mean Pope Francis is implementing “a form of populism,” whereby the authoritarian rule of one gets replaced by the equally authoritarian rule of the majority. Both of these ways enthrone people, and not the Person of the Holy Spirit as the source of all genuine authority. Embracing this deep ecclesiological truth can free people “to recognize what the Spirit has sown in the other as a gift for us.”
Thanks to Pope Francis’s honest self-reflection upon authority and, in particular, his earlier authoritarianism, the coming months and years of his ministry as Bishop of Rome will, as far as governing is concerned, likely yield three rich fruits:
1. Consultation. In appointing a consultation group of eight cardinals taken from around the world, an assembly the pope calls, an “‘outsider’ advisory group,” Francis has given us every reason to believe him when he says, “I do not want token consultations, but real consultations.” Here, the pope seems poised to learn from his self-confessed mistakes as a 36 year-old superior: “I did not always do the necessary consultation. And this was not a good thing.”
2. Collegiality. This phenomenon, which has been part of the church’s life since its very foundation, seems poised to enjoy a renaissance under Pope Francis. Called for most recently by Vatican II, yet not always implemented with dispatch, collegiality generally denotes the cooperation among and ministry of leadership shared by all bishops. The Holy Father looks to “our Orthodox brethren” as people who can teach us “about the meaning of episcopal collegiality and the tradition of synodality,” that is, the practice of convening periodic meetings of groups of bishops from around the world in order to advise the pope, and, literally, to be on the way with “the people, the bishops, and the pope.”
3. Creativity. Here I mean neither ingenuity nor cleverness. I mean what I think the Holy Father also means when he writes,

Pope Francis isn’t speaking here about his own creativity, or simply of taking the “necessary time” to wait for inspiration to strike from his subconscious. Instead, he’s focused on the creativity of God, and the need to let one’s soul, the soul of the church even, wait in stillness for the Spirit of God to move.
---
(CNS Photo)