Conservation vs. Preservation: Caring for Documents that are over a Century Old 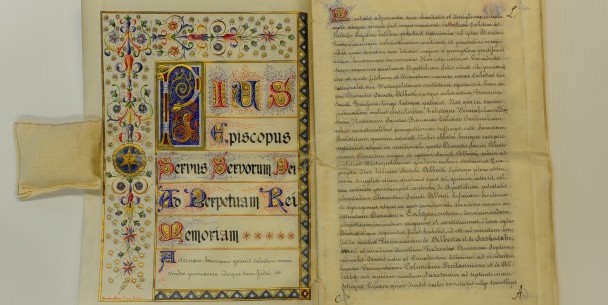 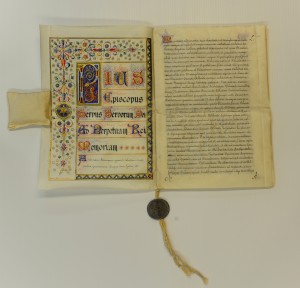 Papal Bull, 1912. The Catholic Archdiocese of Edmonton Archives.
The Bull is an elaborately decorated document, created on vellum (mammal skin prepared for writing or printing) and affixed with a large lead bulla (the large seal which hangs from the bottom of the document bearing the name the pope on one side and on the other an image of the heads of St. Peter and St. Paul). 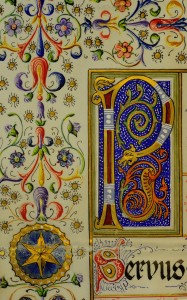 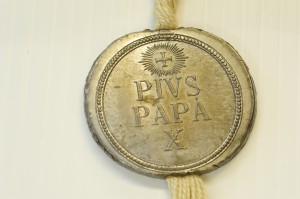 Details from Bull                                                                 The "Bulla" bearing the pope's name and seal
One of the primary responsibilities of an Archivist is to ensure that records which have long-term value are preserved so that they will be accessible in the future. To this end Archivists often undertake preservation work; that is they protect materials by minimizing chemical and physical deterioration to minimize the loss of information and to extend the life of cultural property.  This typically involves  a number of procedures including ensuring documents are kept in acid-free file folders and boxes, that staples, tape, paper clips, and other acid or corrosive materials are removed, flattening rolled or folded documents (such as maps), and storing documents in temperature and humidity controlled environments.
Over the past 100 years the Bull had been moved several times. At some point it was folded in half and stored in a yellow manila envelope, causing a large crease across the document. Vellum is very susceptible to humidity changes and will shrink and swell overtime as it is exposed to these changes – the dry climate in Alberta is certainly not ideal! The decorative details were wearing off, and two small tears had formed along the crease where the Bull was attached – it required conservation work beyond my skills.
Conservation is the repair or stabilization of materials through chemical or physical treatment to ensure that they survive in their original form as long as possible. This work is often conducted by a specialist to ensure that conservation treatments do not damage or alter the document. In the case of the Papal Bull it was extremely important to ensure that treatments made would not damage the calligraphy or decorative details.  Luckily, the Provincial Archives of Alberta’s conservation lab was able to take on the project. Conservator Kimberley Main humidified, stretched and built a special box for the Papal Bull. In the spring the tears will be repaired. In order to ensure its long-term survival the Papal Bull is now safely stored safely in the Archives vault for the next 100 years! 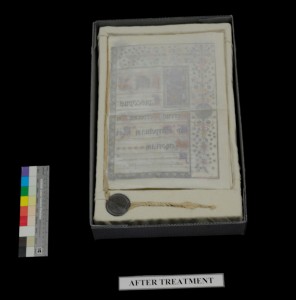