Congratulations to our friend Scott Pelley and the team at CBS 60 Minutes! 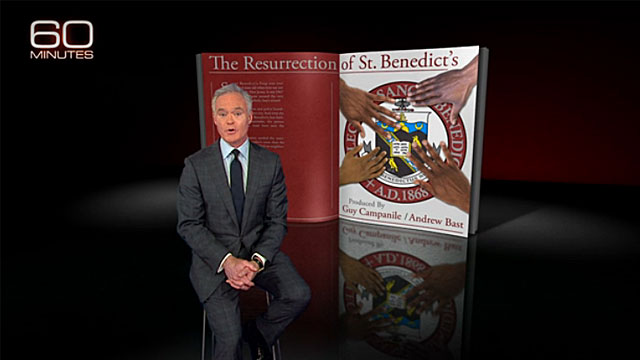 A Sign of hope and new life in the midst of darkness, despair, violence and death in many of the inner cities of North America! St. Benedict's: Witnessing A Miracle In Newark The following is a script from "The Resurrection of St. Benedict's" which aired on March 20, 2016. Scott Pelley is the correspondent. Guy Campanile, producer. St. Benedict's Prep was 100 years old when time ran out on Newark, New Jersey. It was 1967 and all hell broke loose around the very proper, very white Catholic boy's school. Unemployment, racism, and police brutality had ignited the inner city. And even the monks who ran St. Benedict's, lost faith. But the school's namesake, the patron saint of students, must have seen the future. Because no generation needed the resurrection of St. Benedict's more than the minority kids who now filled its neighborhoods... Read more.