Conferral of the Charlemagne Prize to Pope Francis 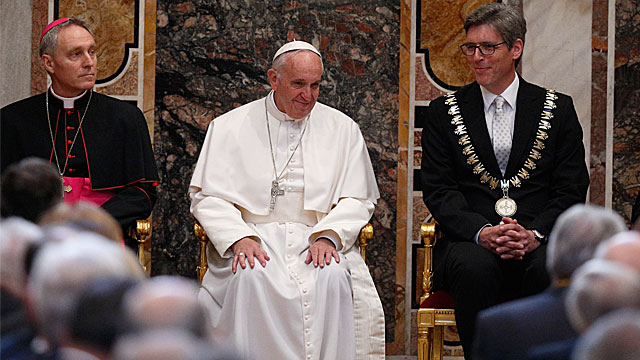 On Friday, May 6, in the Sala Regia of the Vatican Apostolic Palace, the International Charlemagne Prize in 2016 was awarded to His Holiness Pope Francis. In the presence of numerous authorities, the ceremony was introduced by a speech by the Mayor of Aachen, Mr. Marcel Philipp. The Chairman of the Steering Committee of the Association for the award of the International Charlemagne Prize of Aachen - For the Unity, Mr Jürgen Linden conferred the award of the certificate which reads: "On May 6, 2016, in the Vatican (Rome), the International Charlemagne Prize of Aachen was awarded to Pope Francis in tribute of his extraordinary commitment to peace, understanding and mercy in a European society of values. The ceremony continued with speeches by President of the European Parliament, Honorble Martin Schulz, the President of the European Commission, Honorable Jean-Claude Juncker and President of the European Council, Honorable Donald Tusk. Finally Pope Francis pronounced the speech: