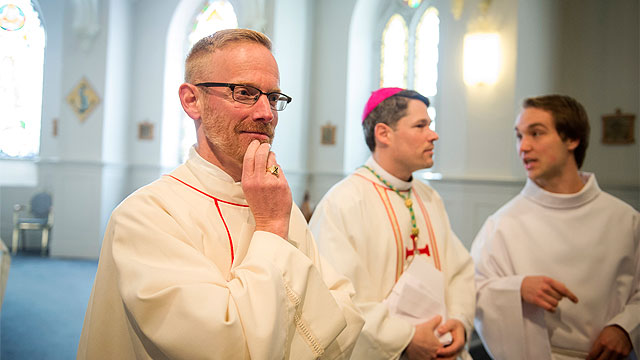 Ottawa, ON. Companions of the Cross, a Community of Catholic priests, elected Fr. Allan MacDonald as the new General Superior of the Community. The vote happened this morning, and signals the end of the General Assembly, which convened in Ogdensburg, New York, on August 30 and wrapped up today. This new general superior follows in the impressive footsteps of now-Bishop Scott McCaig, CC who, before being appointed to the episcopate on April 8 of this year, was the general superior of the Companions for 10 years. Now, Fr. Allan MacDonald will lead the Companions of the Cross Community for 6 years. Fr. Allan MacDonald has served in the following capacities: Vocations Director, University Chaplain, and has assisted with the first year Applicancy Program. He has also led many missions and parish retreats. All this makes him a great leadership choice for a Community that has pastors, professors, university and hospital chaplains, and road missionaries within its ranks. Fr. Pierre Ingram, Companion of the Cross Director of Formation and former Executive Council member said, “He has great spiritual wisdom and experience in ministry, and he exemplifies our charism. We are eager to move forward in our common mission and brotherhood under his leadership." Fr. Allan MacDonald’s appointment comes at a time of great growth for the small Community. The past four years have seen two Community members become bishops (the other being Bishop Christian Riesbeck in Ottawa). The Community is also showing much promise for great growth with 24 seminarians considering the priesthood. Bishop Scott McCaig, CC former General Superior said, “Fr. Allan MacDonald embodies the charisms and spirituality of our late founder, Fr. Bob Bedard.” The Companions of the Cross were founded by Fr. Bob Bedard in Ottawa, Ontario, in 1984. What started out as a small group of men meeting weekly has grown to a Community with 2 Bishops, 38 priests, and 24 seminarians. They serve in Ottawa, Toronto, Halifax, Detroit, and Houston. Photo C/O Companions of the Cross