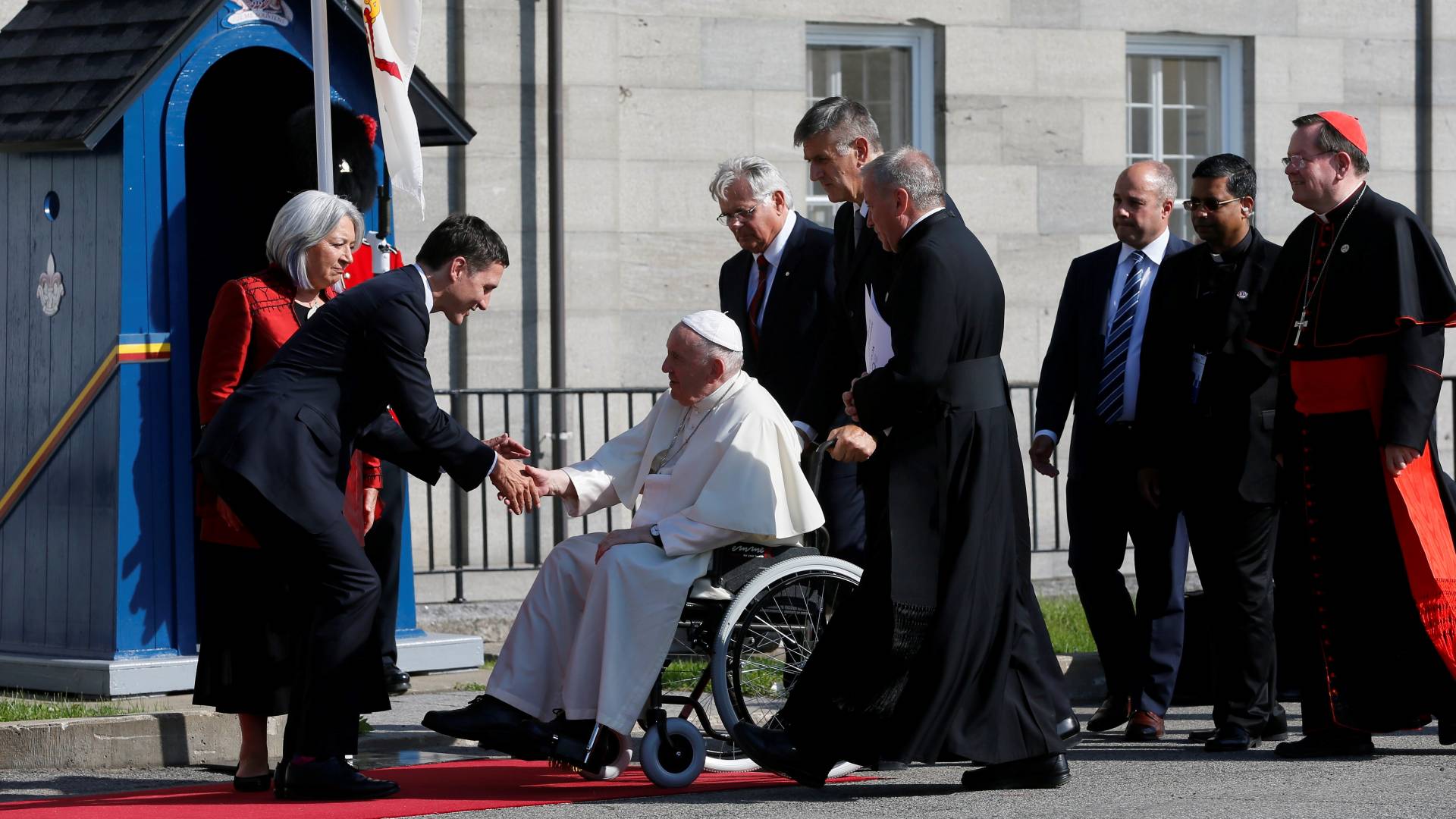 Pope Francis is greeted by Canadian Prime Minister Justin Trudeau and Mary Simon, governor general, during a welcoming ceremony at Citadelle de Quebec, the residence of the governor general, in Quebec City July 27, 2022. (CNS photo/Paul Haring)
QUEBEC CITY (CNS) -- In a British-built fort on the highest hill in Quebec City, Pope Francis spoke to Canadian government and cultural leaders about the never-ending challenge of multiculturalism. And in the Citadelle, the 19th-century fort, Pope Francis finally was welcomed formally to Canada July 27 with an honor guard, the playing of the Canadian and Vatican anthems and private meetings with the governor general and the prime minister. Those standard parts of diplomatic protocol had taken a backseat as Pope Francis focused July 24-26 on his meetings with members of Canada's First Nation, Inuit and Métis communities and his apology to them for the role the Catholic Church played in running residential schools. Nevertheless, an Indigenous drummer welcomed the pope to the meeting room, and an elder using the feather of a wild turkey and a bundle of sweetgrass performed what he termed a "virtual" smudge ceremony, not lighting the sweetgrass because, he said, Pope Francis "has some trouble with smoke." While protocol dictated that Mary Simon, Canada's governor general, gave a speech welcoming the pope to the Citadelle, her official Quebec residence, Prime Minister Justin Trudeau also asked to speak. The prime minister thanked Pope Francis for his apology "for the role that the Roman Catholic Church, as an institution, played in the spiritual, cultural, emotional, physical and sexual abuse that Indigenous children suffered in the church-run residential schools." The papal trip and apology, he said, would not have been possible without the courage of the survivors of the schools, who shared their stories publicly and with the pope. Trudeau also acknowledged that the Canadian government and all Canadians also have a role to play in the ongoing process of reconciliation with their original inhabitants of the land. "Reconciliation is the responsibility of all of us," he said. "It is our responsibility to see our differences not as an obstacle, but as an opportunity to learn, to understand each other better and to act." Simon, a member of the Inuit community, told Pope Francis, "In Inuktitut, 'to heal' is 'mamisagniq.' Mamisagniq is a journey, not a destination. It takes time. It begins slowly, softly, carefully." "Eventually, healing takes us beyond powerlessness or anger or pain. It takes us beyond trauma," she said. "I've seen healing through art, through community, through kindness, through generosity, through the revitalization of language, culture and identity." The residential schools, created and funded by the government, were designed to force Canada's Indigenous communities to assimilate with the descendants of the country's European colonizers. The policy tore families apart and often led to a loss of Indigenous languages and culture. While the schools are a thing of the past, Pope Francis told the government, civil leaders and Indigenous representatives at the Citadelle that the challenge of creating a respectful, thriving multicultural society takes constant commitment and incisive action to ensure that no one is "cast aside like dry leaves to be burnt." "Even in a country as developed and prosperous as Canada, which pays great attention to social assistance, there are many homeless persons who turn to churches and food banks to receive essential help in meeting their needs," the pope said. "These brothers and sisters of ours spur us to reflect on the urgent need for efforts to remedy the radical injustice that taints our world, in which the abundance of the gifts of creation is unequally distributed," he said. Pope Francis described as "scandalous " the gap between extreme wealth and extreme poverty and noted how, in Canada, members of the Indigenous community are more likely to be poor, to have left school early, to have difficulty buying a home and to have little access to health care. At the same time, the pope thanked Canada particularly for its welcome of refugees from Ukraine and Afghanistan. Pope Francis said that in Canada "there is also a need to move beyond the rhetoric of fear with regard to immigrants and to give them, according to the possibilities of the country, the concrete opportunity to become involved responsibly in society." With ambassadors to Canada present at the Citadelle meeting, the pope also spoke about Russia's war on Ukraine and the prevailing discourse in the West of strategizing the best way to fight the war rather than the best way to stop the war. "We have no need to divide the world into friends and enemies, to create distances and once again to arm ourselves to the teeth," the pope said. "An arms race and strategies of deterrence will not bring peace and security" and will not prevent "entire peoples from once more being held hostage and in the grip of terrible and protracted cold wars." "What we need are creative and farsighted policies capable of moving beyond the categories of opposition in order to provide answers to global challenges," Pope Francis said. Pope Francis urged the political, social and Indigenous leaders to listen to and involve young people in their discussions about confronting the challenges. "They deserve a better future than the one we are preparing for them," he said. "They deserve to be involved in decisions about the building of the world of today and tomorrow, and particularly about the protection of our common home."