Co-op at Salt and Light TV 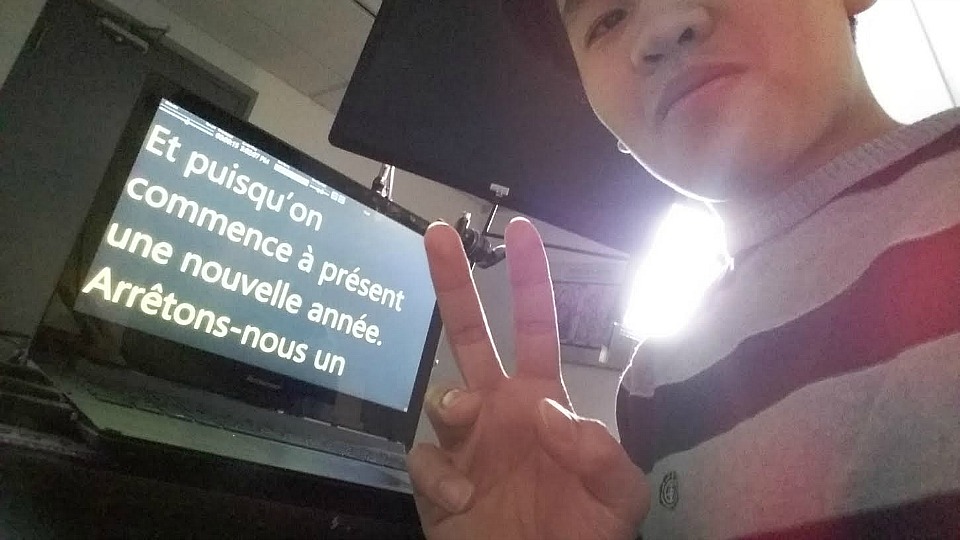 It all started in May of 2016. The co-op teacher at the time, Ms. Millazo, found me three potential co-op placements: a photography business in Brampton, Rogers Television station in Mississauga, and Salt and Light Television in Toronto. I chose Salt and Light Television so I could be in the city. I applied and got an interview with Gita Hosek, the Director of Programming and Production. I showed her my portfolio with my previous work and she was very impressed. She welcomed me to Salt + Light and trusted me to prove that everything I said during my interview was true. I promised her it was. Fast forward to September 2016 - the new school year started and I was ready to start my co-op placement. My first day at Salt and Light Television was September 26, 2016. This is when I met Henry Pope, who would be my temporary supervisor. He showed me the basics of production: transcribing, doing the teleprompter, etc. I was eager to learn. Over the first couple weeks, I met so many new people and learned many interesting facts about their lives. Like how Noel Ocol (Director, Marketing and Communications) went to Cardinal Leger back in the 80’s or how Henry Pope’s (Production Associate) dream job was to become a Canadian Mountie, or how Peter Turek (Cinematographer) and David Leross (Cinematographer) travelled the world as cameramen to film. I was amazed by the new people I was meeting and all their experiences. I also met the other co-op student, Noah Premru and found out that we shared similar interests. During this time, I would occasionally go to on location shoots, where we would film outside of the studio. These places include Ben McNally Books, the Diocese of Hamilton, and a house in Hamilton. On these shoots, I learned most of my production skills by filming as well as through new people I encounterd. For example, on my shoot at the house in Hamilton, I met George Hosek who is a member of the Canadian Society of Cinematographers (CSC) who has worked on Hollywood films. During filming, Dave would teach me about filming techniques such as lighting, properly placing talent, technical aspects of the camera, etc. These on-location shoots were the highlight of my co-op experience because it felt like I was part of a team working together to meet our goal while learning new things at the same time. This brings us to late 2016. I happened to be in co-op during the time Salt and Light was moving to a different location. They needed to pack a lot of items. I helped in every way I could- from moving boxes from the storage space to taking down the entire studio. I took every opportunity I could to help out and make the move a little easier on everyone. We ended up moving on December 8, 2016. Our new office is significantly bigger than our old one. The new studio is four times the size of our old studio. This move was a historic event for the company and I was glad to be there for it. The most important skills I have learned during my co-op experience have been pre-production (researching, script writing, etc.), production (composition, lighting, etc.), and post-production (editing, transcribing, etc.). I can use this experience by putting it into practice when I try to make my own films. Co-operative education is very beneficial to any student because the best way for someone to learn about their field of study is to actually go out and do it rather than reading it from a book. You can learn theory all you want, but you will never learn what you are doing, until you actually go out and do it. This co-op experience has been an amazing opportunity for me and I’d like to thank Dave LeRoss, Fr. Thomas Rosica, and Gita Hosek for the time and effort they put into helping and guiding me.